The Rays and Mariners both have teams that were projected to be phenomenal defensively.  Unfortunately for the Mariners, that's about where the similarities end.  The Rays have a pythagorean record of 25-9 (one better than their actual record) and were 3rd in the most recent BtB Power Rankings.  On the other hand the Mariners have a pythagorean record of 14-20 (also one better than their actual) and were 25th in the BtB Rankings (one spot ahead of the Royals!)

The best place to see the divergence of the two teams is to compare the offenses.  The following chart looks at projected wOBA by lineup slot for the respective teams.  The lineups used were what I could glean from recent lineups and use preseason projections combined with this years data. 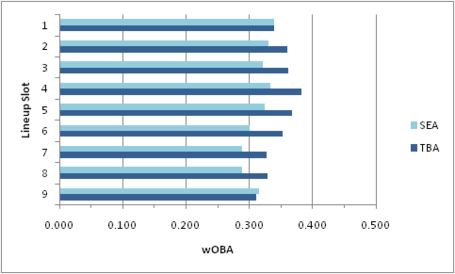 Clearly the Rays hold the edge (often substantially) at most spots in the order.  These projections are mostly indicative of reality as well as the Rays have scored 75 more runs than the Mariners so far and have a 44 run edge in runs created (RC). 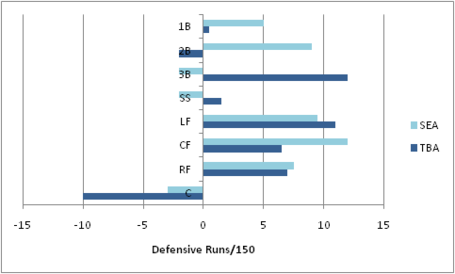 shows that both teams were projected to be well above average defensively (even given current injuries).  In this look, Seattle does have the edge in the aggregate, but it's not an overwhelming edge like they would have against most other teams.  Of note, I haven't updated the defensive projections to reflect and data form this year yet like I have with the offense and pitching.

The final part of the equation is pitching.  The following chart breaks down the Matchups for the series using the CHONE context neutral (ie no defense or park adjustments) ERA and current xFIP. 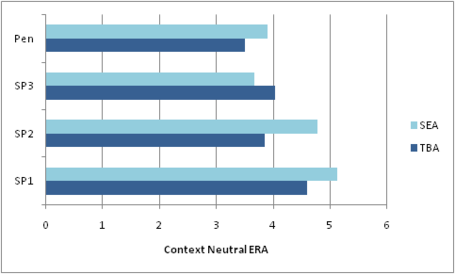 The edge goes to Tampa Bay except in the game that Cliff Lee is slated to pitch (SP3).

What happens when we add all of that up?  I've devised a methodology which I've outlined here and here that I can use to simulate series and get a distribution of results.  Applying that methodology using the inputs outlined in the charts above yields the following 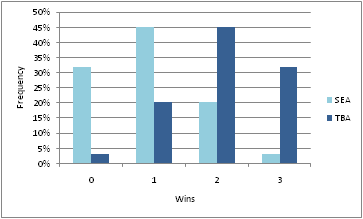 Tampa's offensive advantages make this series appear fairly lopsided on paper, but that's only on paper.  Even looking at the chart above Seattle will still win the series about 1 in 4 times.

Finally, feel free to drop suggestions for next weeks series in the comments