Share All sharing options for: Batting Average and BABIP

Last Friday I had a post published at ESPN's TMI blog looking at Robinson Cano and his chances of putting up a batting average above his BABIP this year. Lefti had a FanPost about the concept recently as well, so I'll try not to rehash things too much. When you're looking at BA > BABIP - if you exclude sacrifices - you basically get down HR / HR + K > BA. That means that the players that are able to pull the trick - 11 a year, on average, since 2000 - tend to be guys that have some pop and don't strike out too often. After the jump is a neat graph of the home run and strike-out levels needed for various batting averages and some of the players who accomplished the feat this past decade, along with the answer to the following trivia question:

Which one of these batters managed a batting average above his BABIP (FanGraphs calculation) in the most (qualified) seasons since 2000:  Eric Byrnes, Jay Gibbons, Paul Lo Duca, Larry Walker. 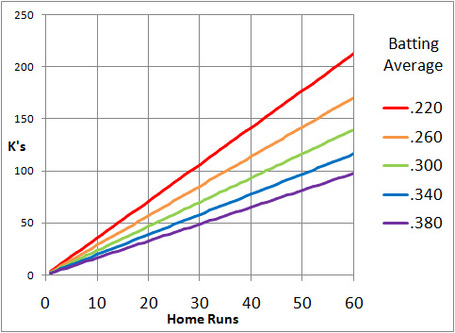 For each number of home runs a batter hits with a certain batting average, you can see the (approximate) maximum number of strike-outs he can have. You can see how much harder it is to pull it off with the higher averages.

By my count, there have been 110 qualified player seasons with a batting average above BABIP since 2000, though the number has lower in recent years due to the decreased frequency of home runs. Several players have done it multiple times, including Albert Pujols (8), Gary Sheffield (7), Barry Bonds (5), Carlos Lee (5), Rafael Palmeiro (5), and Vlad Guerrero (5).

The highest batting average seasons to do it:

One of the neater aspects is the biggest differences between batting average and BABIP:

Barry Bonds (2001) - .328 BA, .266 BABIP, 73 HR, 93 K. The 62 point difference is the highest I've found all-time. Didn't do a complete study, but the closest I saw was Roger Maris' 60 point disparity in his 61 home run season. For any reasonable number of home runs you almost have to strike-out less often than you go yard, and I didn't find any season that worked. Just a crazy year. He walked in almost 27% of his plate appearances, and that's still only the fourth highest mark of his career. The third of four straight years with a wOBA over .500. Absurd.

Bonds obviously displayed tremendous power and didn't strike out very much. I guess sometimes when you set some big records, you manage some lesser records in the process.

The list of best seasons (by wOBA, for example) pretty much mirrors the above. Lots of Bonds, a few sprinkles of Pujols, and a Todd Helton and Luis Gonzalez (his 57 home run season - yes people, that actually happened) mixed in.

Most of players that managed to post a batting average above their BABIP had good seasons - the average wOBA for the group of 110 is .393. That doesn't mean that it's a certainty though. One of the amusing things about the piece at ESPN is that they added in the line "if a player's BA is higher than his BABIP, it means he's showing true hitting prowess." Depending on how far you stretch the definition of "true hitting prowess", that may or may not be true. For example, in his 2003 season, Eric Young posted just a .323 wOBA.. There's also:

Hey look; Randall Simon and Barry Bonds both managed the same elusive feat! I guess that means they're equally awesome hitters! I'd like to see Bonds take a couple of swings at a running sausage to make sure though.

Generally speaking though, if a player posts a batting average (especially a good one) above his BABIP, he's probably had a pretty darn good season.