Which Batters are More Likely to Pull the Ball

Share All sharing options for: Which Batters are More Likely to Pull the Ball 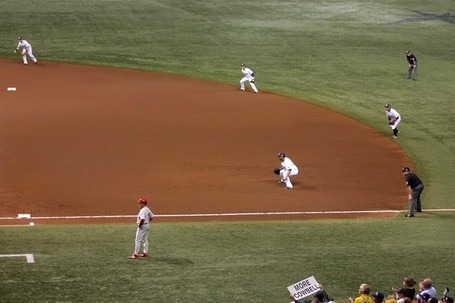 In Spring Training, I saw the Royals put a shift on Jack Cust and was wondering which hitters were the most prone to hit to one side of the field than the other. I was going to use MLB Gameday hit data to determine a couple of other pieces of information, so I used it to help determine where a player bats a ball on average. While I was at it, I found a comparable average distance for each ball hit for each player.

The Gameday data is in X-Y coordinates, that correspond to a certain number of pixels. Peter Jensen at the Hardball Times  took this data and figured out where home plate was for each park.  I averaged these numbers out for a home plate placement of:

Also I tried to use his values for the batted ball distances, which averaged around 2.67. I found this value way too high. Derek Jeter had several 600 ft blasts. I found that the value of 2 to be a little closer, but not perfectly exact. Since all players were adjusted the same, the exact distance doesn't matter to see who hits the furthest on average.

I wanted the data in polar coordinates, distance and angle, for ease of manipulation. I took the distance each ball was from home plate and the angle it was from the center line of the field. The angle is set up so that 0 degrees goes from home plate, through the pitchers mound to center field. All negative angle are towards right field and all positive angles are to left field. I removed the foul balls caught behind home plate. All other batted balls made it into the data as home plate positioning was not know for sure.

I noticed that all the switch hitters didn't really favor a field because they split time from each side of the plate. I had no easy way to know the batter's exacted handedness, so I created another data set for each batter against RH and LH pitchers.

What the data does say:

What the data doesn't say.

With all that said, here are the players that pulled the ball the most. The players near 0 are the batters that bat from one side of the plate and didn't a noticeable split. Negative values are to the right side of the field and positive values are the left side. A minimum of 200 batted balls in play from 2007 to 2009 required for this list (complete list of players on Google Docs).

Besides players that pull the ball the most, here are the leaders and laggards for batted distance. A minimum of 200 batted balls in play from 2007 to 2009 required for this list (complete list of players on Google Docs).