There Aren't Any Great Pitchers Anymore

Share All sharing options for: There Aren't Any Great Pitchers Anymore

I was talking to a friend of mine early last week about active potential Hall of Famers - notably Phillies players such as Chase Utley and Roy Halladay - when something struck me. Going through all the guys in the majors who are locks or near locks to get in (Pujols, Griffey, Rivera, Jeter, Chipper, Pudge Rodriguez, Hoffman, A-Rod/Manny if the steroids thing doesn't hold them back, Ichiro, Thome, Sheffield, Vladdy, Rolen, Andruw Jones, Helton), there weren't any starting pitcher in the list. Sure there are a lot of great starters in the game today, but nobody* with a body of work so good that it seemed they had already punched their ticket to Cooperstown (reasonably speaking). I couldn't remember a time when that was the case.

And apparently neither could Tim Kurkjian over at ESPN, who posted an article on the exact same point - minus advanced stats, plus player quotes and story line - on Friday. I guess you could say that I'm the Isaac Newton to Kukrjian's Gottfried Leibniz. (Yeah, I went there - although to be honest, I'm a Leibniz fan myself sans the monads.)

First, some of the active candidates. Current leaders in Wins, with seasonal age in parentheses:

300 wins is probably out of the question for anyone here, but even 250 might be a stretch (not including Moyer). Pettitte said he may retire after this season, though it's possible the Yankees provide him with enough run support to win 21 games. Wakefield has a shot at 200, but unless he's still floating 'em up there at age 50, 250 isn't happening. Livan, Millwood, and - further down - Suppan are way too fair into their declines to get to 200. Doc can get to 250 with 20-21 win seasons through age 38 or 15 win seasons through 40. Lefties Mark Buehrle and CC Sabathia have a good base from which to start and are pretty young/durable - I suppose those would be the two I'd bet on to reach 250 wins.

Wins, of course, aren't a great way to judge pitchers. Here are the active WAR leaders, from Rally's invaluable database:

(I know Mo isn't a starter, but he leads all active pitchers. How about that?)

Most of the same names, if not in the same order. I thought it might be interesting to take each pitcher's 2010 CHONE projection, work in a half win yearly decline through age 35 and a .75 win decline thereafter (otherwise guys would be pitching until their mid 40s), and see where each starting pitcher might end up*.

* For entertainment purposes only.

CC and Doc both look solid, but that's about it. The mid 50s is Chuck Finley/Bret Saberhagen territory (plus some HOFamers like Red Faber). Javy probably wouldn't have a good chance due to public perception, but he's a pretty darn effective pitcher. Anyway, back to the original issue; how long has it been since the no starter in baseball had a really strong body of work behind him (as proxy for Hall of Fame potential).

Looking at it by season, here's a graph of the highest career WAR by a (starting) pitcher coming into a given year in which they pitched at some point. The active career WAR leader, if you will. 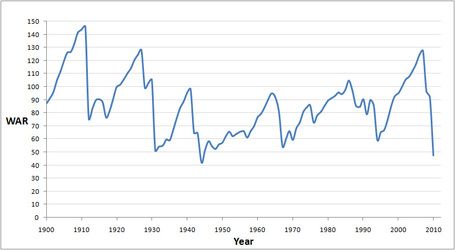 You can see Roy Halladay is the last point to the right at 47.4. The only time - since 1900 (and even going back to 1884) - that there's been a season without such an established pitcher was 1944. That was right after Carl Hubbel retired and Red Ruffin wasn't in the league at the time - and Indians right-hander Mel Harder was king of the mountain with his 42.1 career WAR. Harder was 34 that year, well away from his peak seasons, and would retire at 37 with 42.5 WAR. If you exclude the WWII years - with many players serving in the armed forces and thus not being eligible here - then at no point in history* has there been a season like the 2010 one. By the way, if you want to use Mo's 49.9 WAR then the point still stands.

* Also excluding the very early years where it obviously wasn't possible for a player to have built up a career since the league just started.

The list of starting pitchers with the highest career WAR going into the given seasons:

Every single person on that list is either in the Hall of Fame, or will be (fingers crossed for Bly) - except for Mel Harder and, of course, possibly Roy Halladay.