Working Off The Plate To Get A Called Strike

Share All sharing options for: Working Off The Plate To Get A Called Strike

I'm very excited to be joining Beyond the Box Score. A lot of fantastic baseball writers have called BtB home, so it's very cool to be in that group (the latter, if not necessarily the former). For those interested, you can find my Orioles coverage at Camden Crazies and follow me on Twitter at (surprise!) CamdenCrazies. Hope you enjoy my miscellaneous ramblings.

I was looking at some Pitch/FX data a couple weeks ago and - as will sometimes happen - Tom Glavine popped into my mind. Specifically, the way Glavine was said to have worked the outside corner, getting a called strike and then throwing a pitch a little farther outside, and then another a little farther, and so on. As the announcers would tell it, before long Glavine would be getting strikes called on pitches a foot outside. I asked around and it seemed that no one had looked into this previously (correct me if I'm wrong), and Eric Seidman from Baseball Prospectus was kind enough to help me lay out how to go about things. (I didn't do exactly what Eric suggested, but I wanted to thank him for the assistance.)

So here's how it worked; I took all of the pitches thrown in 2008 and 2009 off the outside edge of the strike-zone and looked at the called strike percentage for the ones taken in that area. Then I looked at the called strike percentage in that zone depending on where the previous pitch was thrown (with the same pitcher/batter), assuming that it too was taken (and whether it was called a ball or a strike).

* It should be noted that the strike-zone already extends outside off the plate, so the "outside edge" zone is actually right off the plate but mostly in an area were pitches are called strikes more often than not. I suppose the zone could have been called "off the plate" and "well off the plate" instead.

This is a graphic of the zones I'm talking about (to a left-handed batter, in this case), with the orange area being the pitches farther outside the zone and the blue area the pitches on the outside edge of the zone. 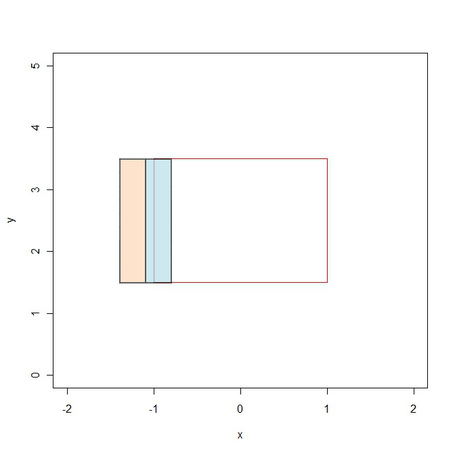 To the results... Here's a table of the various called strike percentages for pitches in the orange zone, for left-handed hitters and right-handed hitters:

You can see how much more often lefties get that outside pitch called against them than righties in general. When a batter took a previous pitch (Pitch 1, let's say) - regardless of the call or the location - the called strike percentage on the subsequent pitch off the plate (Pitch 2) was lower than overall rate. When Pitch 1 was thrown off the plate outside, Pitch 2 was called a strike more often - especially to right-handed batters (relatively speaking). On the other hand, when Pitch 1 was thrown on the outside part of the plate then Pitch 2 was actually called a strike less often. Perhaps seeing a pitch there allowed the umpire to more clearly focus on the dividing line between a ball and a strike.

Did it matter what Pitch 1 was called?

As expected, if Pitch 1 well outside the strike-zone was called a strike then Pitch 2 was more likely to also be called a strike. (Consistency!) Against right-handed batters there was a particularly big jump, though those sample sizes were relatively small. For pitches on the edge though, getting a strike called actually made it less likely that Pitch 2 was called a strike, as well as being less likely than if Pitch 1 was called a ball. The differences aren't tremendous - and I don't want say that there was certainly a causal relationship - but perhaps the umpires would occasionally throw in a make-up call if they think they missed one. And when Pitch 1 was taken for a strike not on the outside part of the zone, then having Pitch 2 called a strike off the plate was far less likely.

I thought that maybe the general rate at which different umpires called strikes in the orange zone had an effect, but when splitting things out by those that had a higher than average called strike percentage in the outside zone and those that had a lower than average called strike percentage, the relative differences were similar to the overall numbers. I wanted to do it by individual umpires, but the sample sizes where way too small.

Wouldn't say this was conclusive, but I thought it was interesting. It does look like being able to hit your spot off the plate repeatedly might get a pitcher an extra call or two.