The New "Big Three" By The Bay

Share All sharing options for: The New "Big Three" By The Bay

After the San Francisco Giants announced that they re-signed right-hander Matt Cain to a contract extension that will keep him around through 2012, Giants beat writer Andrew Baggarly made an interesting point about the state of San Francisco's future starting rotation: it will be really, really expensive.

As of right now, the Giants have $19M due to lefty Barry Zito and $15M committed to Cain for the 2012 season. Under the basic arbitration system, players are given roughly 40%, 60% and 80% of their actual value during each of the respective three arbitration years. That means that ace Tim Lincecum is due roughly $19.5M for 2012, his final arbitration season, after making $8M this season and $13M in 2011.

To add that up, between those three pitchers, the Giants will have an astounding $53.5 million committed to just three starting pitchers. To put things simply, teams have never really spent that kind of money on their top three starters. Well, I mean, teams other than the Yankees haven't.  After the jump, I have a quick and dirty chart up (once again, blurry as hell; if anyone could help me with that, I'd really appreciate it!) comparing the Giants' 2012 top three starters to the respective top three's of each team for 2010, based on salary. The salaries are roughly adjusted for inflation, as well. 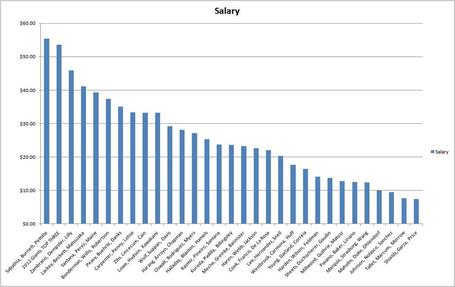 You can click on the image to open up a window with a clearer view. These are the total salaries of the three highest-paid starting pitchers in each organization, accounting for inflation.

-The Giants' 2012 Top 3 would be one of the most expensive ever. The Yankees' 2010 Top 3 is more expensive after adjusting for inflation, but then again, they're the Yankees. One thing I can tell you about the Giants, is that they aren't the Yankees.

-You gotta feel for Mets and Tigers fans. Each team is currently employing one of the five most expensive Top 3's in the game, but neither team is getting even close to that kind of production. It's never good when your three most expensive starters are battling for the No. 4 and No. 5 spots in your rotation. I'm still trying to figure out what Dombrowski was thinking with the Willis and Robertson extensions.

-Brewer fans should probably be a tad disappointed, too. For nearly $30 million, one would expect to get more than Randy Wolf, Jeff Suppan and Doug Davis. Hey, that Yovani Gallardo is awfully good, though, right?

-Of the Nationals' top 3 starters in terms of salary, only one of them is in the Opening Day rotation, Mr. Jason Marquis. Right-handers Chien-Ming Wang and Stephen Strasburg (not sure if you've ever heard of these two) are expected to arrive in Washington later this season, but they're currently Washington's second- and third-highest paid starting pitchers, respectively.

-At the bottom, I'm still blown away by everything that Tampa Bay does. They have the cheapest starting rotation in the game, but I can promise you that most teams would kill for a rotation of Shields/Garza/Price/Niemann/Davis. Did we mention that Jeremy Hellickson, Matt Moore, Alex Colome, Alex Torres, Jake McGee and Nick Barnese are on their way as well?

So while I don't really have any sort of major conclusion to come to here, I think that it's interesting to note the path that the Giants are set on. Maybe they trade Cain before 2012, or maybe Lincecum breaks down and ends up getting a pay cut in 2012, rather than another raise. But as things look right now, San Francisco is on its way to employing one of the most expensive trios at the top of a rotation ever.