Do Long Plate Appearances Affect The Next Batter?

Share All sharing options for: Do Long Plate Appearances Affect The Next Batter?

Does a lengthy plate appearance have any effect on the subsequent batter? The question was asked by Dave Moran and passed along to me by RJ Anderson, who's been doing a public service with his recent Twitterverse giveback posts at FanGraphs recently. So that's an interesting idea. My intuition was that there was no effect, or - if anything - that the next batter would hit slightly better.

To check it out, I looked at all of the plate appearances in my Pitch/FX database - which encompasses 2007 through 2009 - and ordered each by how many pitches the previous batter saw, while excluding them if the pitcher wasn't the same (since I assume that's where the effect would be). Defining a long plate appearance as having 10 or more pitches, I came up with 1,758 such cases. So how did those batters do?

Here's are OPS figures based on number of pitches in the previous plate appearance: 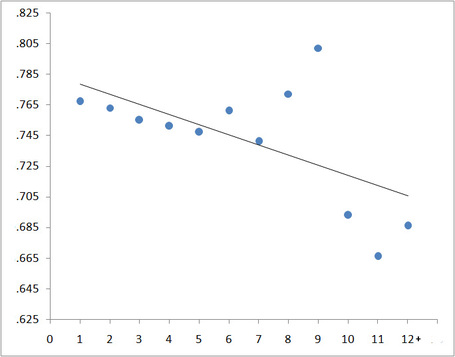 As you move to the right, the sample sizes are getting smaller. The last point is for 12 and more pitches, and the R-squared for the trendline is .355. That's a pretty clear looking trend, especially with the shorter plate appearances where the sample sizes are quite large. The R-squared of the trendline for just 1 through 5 pitches is .982, with a drop of about 4 points of OPS with each extra pitch.

Grouping things together a little, here's some more broken down data: 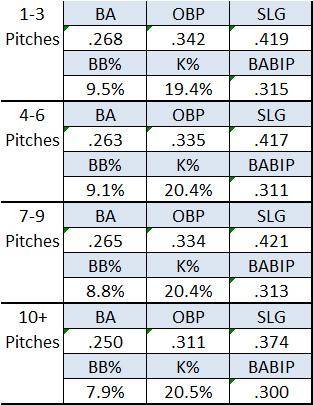 You can see that the primary reasons for the falling OPS are the decreased walk rate and the relatively hefty drop in BABIP. The home runs per plate appearance also fell from 2.5-2.7% in the first three groups to 2.1% in the last group. After a long PA, the next batter just hit worse all around.

I thought that maybe there was some selection bias involved, but in each grouping both the batters' OSP and the pitchers' OPS against were similar across the board (around .750). It wasn't a matter of good pitchers dominating poor hitters after throwing a bunch of pitches to the previous guy.

It really does look like something may be going on, and I'm hoping to look into it further in the near future. One theory suggested to me was that perhaps the outcome of the previous plate appearance has some effect, but I'm certainly open to other ideas to potentially investigate.