How to Make Contending Difficult: Have Jon Niese as Your Second-Best Starter

Share All sharing options for: How to Make Contending Difficult: Have Jon Niese as Your Second-Best Starter

This afternoon, David Lennon of Newsday (hat tip: MLBTR) reported that the Mets were considering signing recently released right-hander Chad Gaudin, presumably with the idea of using him in the bullpen and as rotation fodder. This got me looking at the sad state of New York's rotation; something that I do from time to time to make me feel better about my team's rotation.

And I noticed something that seems really odd for a team that expects to contend: the projection systems expect New York's second-best starter to be left-hander Jon Niese, he of the #77 ranking on BA's 2009 Top 100 and 39 innings of MLB experience. Now, Niese certainly is a good young pitcher. He's pitched well in the upper minors, and most scouts have regarded him as a high-probability prospect with good odds of becoming a solid mid- or back-of-the-rotation starter.

But we're not talking about some Spring Training competition for the fifth starter's spot. We're talking about what amounts to being the No. 2 starter on a team with a roughly $140-150M payroll (How does Cots not have projected payrolls for 2010 up yet?) and expectations of contending for a divisional crown.

And right now, CHONE, Marcel, ZiPS, Bill James and the Fans are all in agreement that Niese looks to be their best starter going forward behind Johan Santana. For a team that spent tens of millions on their bullpen and Oliver Perez before 2009, and then tens of millions on Jason Bay, Alex Cora, Gary Matthews Jr. and Henry Blanco before this season, that's just not acceptable.

I know that building a good rotation is tough. But this is a team that opted to skimp on the draft for years, committed massive money to an ace with a lot of mileage on his arm, and decided to commit to Ollie the Folly (New nickname, anyone? Anyone?) as their No. 2 starter. What else could they really expect but a pathetically shallow starting rotation? When Omar Minaya loses his job (it's really no longer an if anymore, right?), people will present a multitude of reasons for why it happened. But quite frankly, many of those reasons simply wouldn't have mattered if Omar had been able to build a solid pitching staff.

Also, I tossed up a little chart with CHONE's projected FIP's for each of New York's starters. It's nothing special, I just thought I'd toss a graph on here. It's after the jumptacular jump. 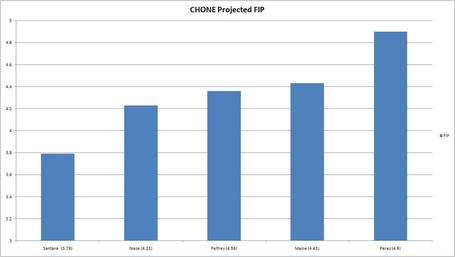 Sorry it's tiny, for some reason I can't get the images to come out very clear on the computers at my high school. Alas, you can click on the image to get a clearer view. Needless to say, the Mets' rotation could use some help.