Share All sharing options for: Pitcher and Hitter Friendly Umpires

I always liked looking at pitches that players and managers argue over with the umpire (Milton Bradley, Shane Victorino and Zack Greinke).  In every case the umpire was correct in that they called a consistent zone throughout the game.  This season I am going to try not to nit pick pitches, instead give a general sense of it an umpire is hitter or pitcher friendly.  There have been several articles (one for example) on the ratings of umpires, but I wanted to simplify it to umpires that are just hitter and pitcher friendly.

First, I wanted to look at how many walks and strikeouts each umpire allowed.  So I took the total number of plate appearances, strikeouts and walks over the past 3 seasons and figured out the number of K and BB's for every 27 ABs (this number could be changed, but it won't matter in the analysis).  I found a cut offline for umpires that worked regularly and took those that had been behind the plate for 3750 plate appearances over the 3 years.  I only used these umpires for the analysis.

Then I calculated the league average for the 2 rate stats (4.7K/27PA, 2.2W/27PA).  Using these values I then found the percentage that an umpire was over or under these values.  For example if an umpire average 4.5K/27PA, he would have a K% of 95%.  Finally I subtracted the new K% from the BB% to get how pitcher or hitter friendly is the umpire.  A positive value is pitcher friendly and a negative value is hitter friendly.  Here is a link to these stats.

Here I used Pitch FX data to determine the number of balls called inside the strike zone and the number of strikes called outside the strike zone.  I wanted to use a variable zone that was different for each combination of right and left handed pitchers and hitters like I started in this article.  I have not had time to complete all the work, so instead I am just going to use the official zone of 1.5 ft to 3.5ft tall (adjusted for batter height) and -1 ft to 1 ft wide.  I followed the basic procedure as I did with the strikeouts and walks above.  For the last 3 years, I got the percentage of balls called in the zone and strikes out of the zone.  Then I found the league average and converted each pitchers values to 100% scale.  Finally I subtracted the 100% scales to get an overall value with a positive percentage being pitcher friendly.  Here is a link to these values.

Combining Values to get an Overall Ranking 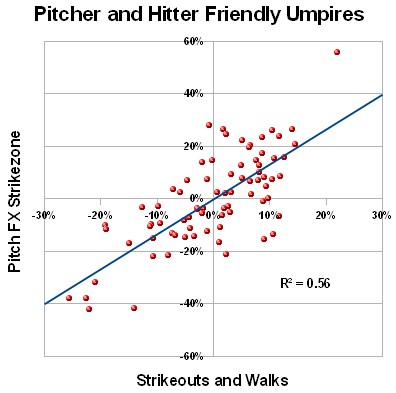 As it can be seen that most umpires are bunch together, while there are a few outliers.

Here is a list of the umpires with both the percentage differences averaged together to get the most hitter and pitcher friendly umpires:

As it can be seen there is one umpire that the pitchers love (Doug Eddings) and 5 that the hitters love (Randy Marsh, Gerry Davis, Jerry Crawford, Paul Schrieber and Tim McClelland).  This chart should give a person a good quick reference if an umpire is generally tight or loose with their zone in the past.

Finally here is a comparison of the two umpires at the extremes, Tim McClelland and Rich Eddings, using a heat map to compare the umpire's strike zones.  The area is divided into 2.5 inch squares and the scale on the left is the decimal value (0.5 = 50%).  The value is the number of called strikes in the area, versus the total number of called balls and called strikes.  The perspective is from the catcher/home plate umpire and is divided up for left and right handed hitters.  The box is the official strike zone and the circle is added for reference (it has no real meaning).  I have also created an animated gif for easier comparison. 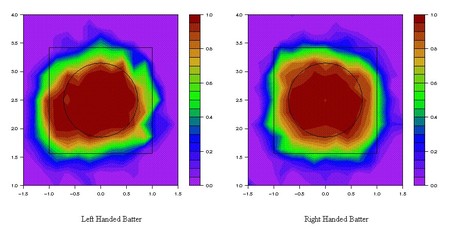 I have not been able to get the animated .gif to work in the SBN software, so here is a link to the comparison.

Though it is not completely obvious, but Eddings really expands the zone inside on left handed hitters and calls more high and low strikes.

I hope that will be it for my umpire rants this season and feel free to ask any questions.