When Joe Mauer signed his eight-year, $184M deal with the Minnesota Twins, many people pointed out that it was the fourth largest contract in baseball history. Well, it's also the largest contract ever given to a catcher...   by far.

Below is a chart of the ten largest contracts ever given to catchers, based on guaranteed money. To put things lightly, Mauer's contract is pretty special. 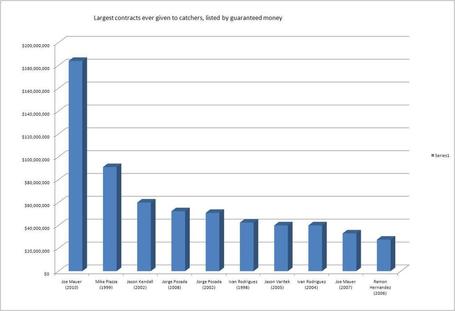 Sorry that it's a bit grainy, you can click on the image to get a bigger, clearer view. But even so, it's not hard to recognize that Mauer's deal isn't just big for a catcher. It's freaking insane, based on what other teams have spent on backstops. No catcher has ever received even half of the guaranteed money that Mauer just signed on for, and only Mike Piazza's six-year, $91M contract with the Mets from 1999 is over $60M guaranteed.