Share All sharing options for: Spring Cleaning – WPA - Looking at Wins and RBIs

I have several article/projects I began previously, but never published/finished. This week I will publish several as I don't see myself going back to them to finish them to original level I wished. I was thinking of just deleting them, instead I am hoping someone may find the partial work useful.

A while back in a thread I mentioned that I didn't like WPA (win probality added) as a stat because all it measured was RBI's for hitters and wins for pitchers and I really preferred using WAR added. I looked at the data then and now finally publishing it. First I would like you to answer the poll question:

Of a pitchers' win total or a batters' RBI, which one correlates more to WPA (data of qualified Pitchers and Hitters from some point near the end of last season)? 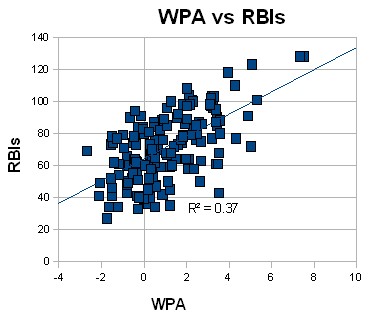 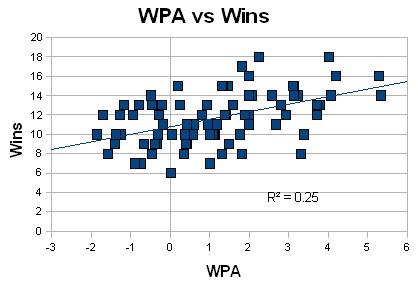 While I was at it, went ahead and mapped WPA vs RAR for this same pitchers and hitters 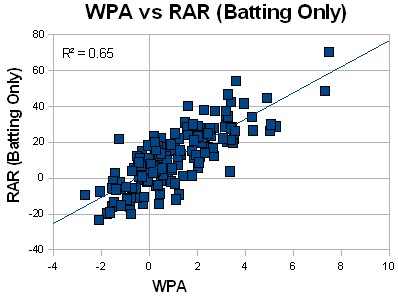 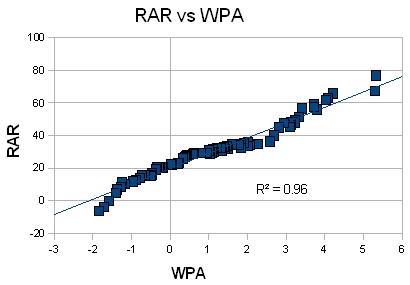 WPA given to pitchers almost directly collerates with WAR (r-squared of 0.96). Hitting WAR and WPA do somewhat correlate (r-squared = 0.65), but not as much as pitching for this sample size.