The past two days have seen a lot of nice retrospectives on the impressive careers of Nomar Garciaparra and Brian Giles, as they've each announced their retirements this week. Now, I already looked at Nomar's impressive peak years, and Matthew Pouliot of HardballTalk took the time to acknowledge Giles' brilliance while playing in the relative obscurity of Pittsburgh.

But I had so much fun reflecting on Nomar's greatness that I thought that it would be prudent to delve deeper into what made Giles "an unappreciated superstar", as Pouliot called him. I'm not so much going to look into why he wasn't properly acknowledged for his greatness, the reasons for that are fairly simple, it would seem. Namely, he was the best player on consistently awful teams, and his impressive numbers were overshadowed by the power boom of the era. Why pay attention to Giles when Sosa and Bonds were doing their thing?

But for a while there, Brian Giles wasn't just a good hitter. Hell, he wasn't even a very good hitter. During his prime, Brian Giles was a freaking awesome hitter. But what I want to look at is where he places among the great hitters of that period. There were so many brilliant offensive performances during that period that it's difficult to gauge which were most impressive. I'd like to see where Giles fits in.

After being dealt to the Pirates following the 1998 season by the Indians for Ricardo Rincon (yeah, Giles was already worth nearly four wins in 1998 according to Rally, but it's Ricardo Rincon!!), Giles immediately established himself as an elite power hitter.

For the next four seasons, Giles absolutely terrorized the NL Central in a way that only Sammy Sosa and Jeff Bagwell had been, and in a way that we haven't seen since with the exception of Albert Pujols and the occasional monster year from the likes of Lance Berkman or Derrek Lee, for example.

(Note: the below graph is for RAA, and NOT Wins Above Replacement. I knew I would make that mistake somewhere. What a knucklehead.) 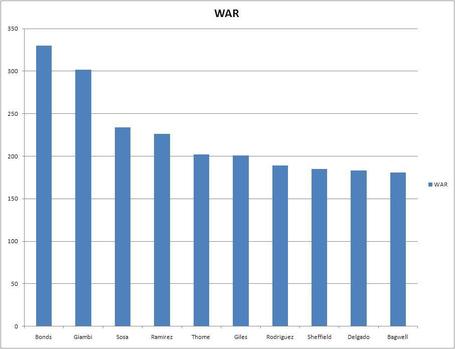 First off, let's marvel at what Barry Bonds and Jason Giambi did during that time period, even if it wasn't done the all-natural way. Posting 300 runs above average offensively over the course of a four-year period is unreal. Over the past four seasons, Albert Pujols has been 253 runs above average offensively. Bonds and Giambi easily outpaced that mark. If you consider Pujols to be a great hitter, and I can't imagine that anybody doesn't, then I'm not sure how to classify what those two did.

Here's a bar graph look at how each hitter did, going year-to-year, with WAR on the y-axis: 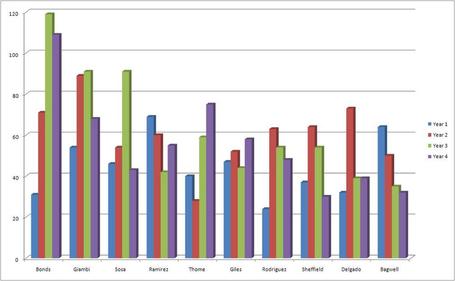 Bonds saw a massive climb after 1999, posting some of the greatest offensive numbers in the history of games involving sticks and balls. You'll also notice that other players, such as Thome and Rodriguez, had some relatively underwhelming offensive years.

But Giles doesn't have any peaks or valleys really during this period. He never had one of those seasons where you would look at the numbers and think, "What the hell happened there?" (Ahem, Luis Gonzalez, ahem). His lowest RAA total was +44, his highest at +58. Only Giambi and Giles posted RAA's of 44+ in every season from 1999 to 2002.

So what exactly does all this mean? I'm not really sure, but to me, it means that next time we delve into the great sluggers of the steroid era, it would be silly to exclude one of its most prolific producers, and that's exactly what Giles is. Giles may not have been particularly good in the field (TotalZone has him at -20 for his career), and he wasn't anything special on the bases. So nobody is going to confuse Giles with any of the greatest players of his generation.

But when we're talking about hitters, I think that it's time to give Giles his due. Because for a few years there, he was absolutely tearing up the league.