How Good Was Nomah's Prime?

Share All sharing options for: How Good Was Nomah's Prime?

In case some of you managed to miss it, Nomar Garciaparra announced his retirement yesterday after agreeing to a one-day contract with the Red Sox so he could finish his career in the same place he started it. Of course, I was right on the news considering I've been home in bed with the flu all week (that's what I get for not getting a flu shot, I suppose..).

Now, I think that we can say pretty comfortably that Nomar just isn't quite a Hall of Famer. His career WAR (from the Rally database, as if I'd get it anywhere else) is 42.6, surrounded by players such as George Foster, Tony Oliva and Brian Giles. All very good players who had great years, but not exactly worthy of Hall of Famer status unless we make Jim Rice the standard.

But in the early portion of his career, Garciaparra truly appeared to be on his way to Cooperstown, as part of the brilliant triumvirate of the late-90's/early-00's that included him, Derek Jeter and Alex Rodriguez. The latter two appear to be locks for the Hall now, as they continue to churn out star-quality numbers, but we haven't seen Nomar's best days since 2003, back when the Curse of the Bambino hung over the entire franchise. And if you don't believe in curses, then to put it simply, back when the Red Sox luck really sucked.

But what did seriously impress me about Nomar's numbers was his prime. From 1997 to 2003, he was undoubtedly one of the best players in baseball, he posted WAR marks above 5.9 in every season with the exception of 2001, when he only posted 91 plate appearances due to injuries. It got me thinking about how his prime compares to that of the other great shortstops in history, because at first glance it's awfully impressive.

So to compare, I thought that I would look at the best seven-year periods for the other great shortstops of baseball lore. I looked at his performance compared to that of the 11 shortstops that made Rally's All-Time WAR Top 100 for position players: Honus Wagner, Alex Rodriguez, Cal Ripken, Robin Yount, Arky Vaughan, Barry Larkin, Derek Jeter, Alan Trammell, Pee Wee Reese, Ozzie Smith and Ernie Banks. Now, I know that a few of these guys, namely Yount, Rodriguez and Banks, didn't play shortstop for their entire careers, but they played there during their primes and are undoubtedly remembered as shortstops, for the most part. 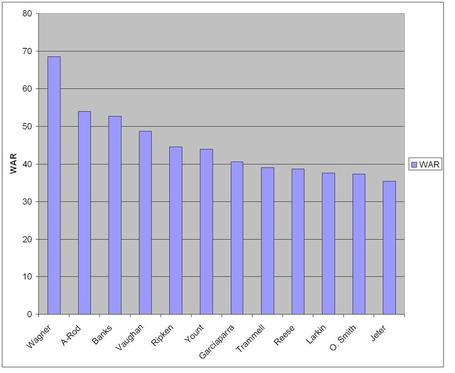 To put it simply, Honus Wagner was a freak. His seven-year peak of 68.5 WAR is otherworldly, with an average per year WAR closing in on double-digits. And what's even crazier? His peak contributed the second lowest percentage of his total career WAR among all the players, reflecting how Wagner really is one of the four or five greatest players to every play the game. Nomar is sandwiched nicely in the middle, his prime fits right in with the other historical greats.

Something else that really impressed me about Nomar's prime was his consistency. Other players saw big jumps in their performance followed by big drops, such as Robin Yount's jump from a 5.2 WAR in 1981 to a 11.5 WAR in 1982, then back down to a 7.5 WAR in 1983. Nomar didn't have those kind of fluctuations. That is, excluding injuries. 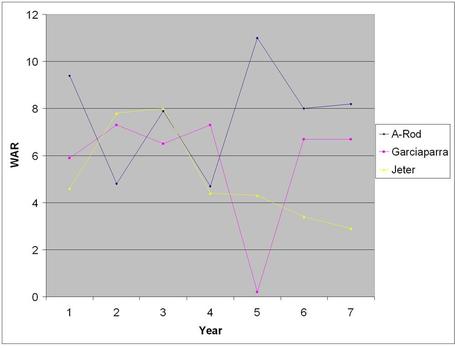 Nomar's WAR was always within the 6-8 WAR range, of course with the exception of his injury marred 2001. Meanwhile, Rodriguez's prime included some absolutely monster seasons, but he also had two years worse than Nomar's worst healthy season. Jeter, on the other hand, peaked slightly higher than that of Garciaparra, but as his defensive numbers began to take hits, his WAR gradually declined during the latter half of the seven-year span.

Unfortunately for Nomar, that seven-year span was essentially the only legitimately productive period for the player, although he would go on to be a solid short-term starter for the Dodgers at first base later in the decade. But when looking back at his career, he'll be remembered for what he did in a Red Sox uniform, and it's pretty obvious why. 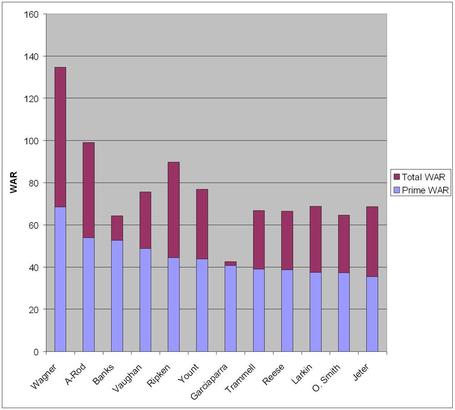 The only other player whose decline phase is remotely similar to Nomar's is that of Mr. Cub, Ernie Banks. Both were elite shortstops before injuries forced them to move off the position, and both of them quickly declined. But Banks' prime and his total WAR are markedly better than those of Nomar, and he was a part of the 500 Home Run Club back when it actually meant something truly special, so his status as a Hall of Famer would seem to be a no-brainer.

Going forward, I think that we can say pretty comfortably that Garciaparra didn't quite do enough to find a place in Cooperstown. But even without the HOF-quality career, we should at least acknowledge his HOF-quality peak.