The Pitching DiamondView is here.

Share All sharing options for: The Pitching DiamondView is here.

The cost of all great combined statistics is both understanding and context. Gross Domestic Product, for example, offers a combined look of various economic measures of consumption, investment, and spending, but overlooks sustainability, quality, and distribution. It's a nice stat that those that understand can glean meaning from, but generally doesn't help the average person understand what is really happening, other than "bigger is better, right?"

Having exhausted what little knowledge my Economics for Administration class and risky use of wikipedia provides, we can look at any statistical approach and see somewhat glaring omissions or oversights in combined one-for-all statistics. Still, the natural human tendency is to look for the one combination of all things known into a single description that tells us everything we need to know about a particular subject. For the NFL, we have QB Rating (ugh), for Physics, string theory, and for social networkers, the still unnamed "# of unwanted comments from ancillary friends per post."

The same need exists for baseball fans. The conclusion I came to after some extended consideration (beer and videogames), is that perhaps the best way to describe some total package of talent is visually, rather than numerically.

Thus, the DiamondView was born. 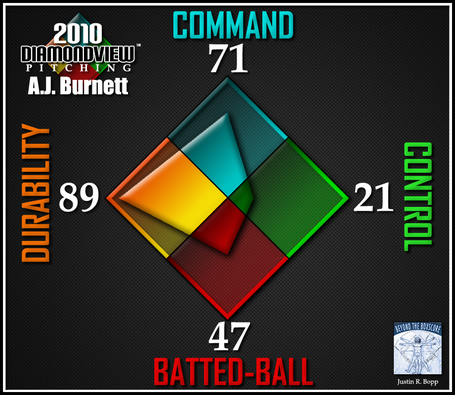 The Pitching DiamondView tells exactly what kind of pitcher we're looking at.

The DiamondView, as you may already know, is a visual way of describing the classic 5-tool set of hitting, power, running speed, arm strength, and fielding. Combining arm strength and fielding into one point on the graph, the results are something that works for both sabermetricians and the average baseball fan as a single-view tool to understand the type of player he or she is observing. The benefit (and goal), other than looking at the pretty colors, is the ability to look at an unlabled DiamondView and be able to guess which position that player plays. The cost, and why we're here, is the glaring omission of the other half of the game: pitching.

The Pitching DiamondView is this author's attempt to fill that need.

The first step was establishing exactly what needs to be observed of pitchers to determine his "type" while remaining somewhat sabermetrically sound. To my knowledge, there is no "5-tool set" for pitchers, so I had to approach it from the perspective of best data available while capturing the biggest picture possible.

So, what do we need to know?

1. Command: Can this pitcher strike people out?

2. Control*: Can this pitcher prevent walks?

3. Batted-ball: When a pitched-ball is hit, where does it go?

4. Durability: How long can this pitcher last in-game and throughout the season?

*I do realize I'm taking some liberty with the definitions of both Command and Control, but I believe both are intrinsically linked, so I'll explain. For this purpose, I'm using the idea that command is the ability to throw strikes, while control is the ability to stay ahead in the count and keep batters off-base. If this is too controversial, brings my audience to tears, or is a catalyst for torch-bearing baseball purist zombies to tear down my door, I'd be happy but reluctant to change it to some other less alliterative word(s).

The answers to these questions are as follows: we can measure the ability to strike people out with K/9 and the ability to prevent walks with BB/9. Easy enough (see above). Batted-ball is the question of whether the ball goes up (fly ball) or goes down (ground ball), and sure enough, we have a stat for that - Ground Ball / Fly Ball ratio (G/F). Durability is an interesting one, because the best measure of what a pitcher can do is by looking at what he just did, so to properly capture starters that go 8 innings and relievers that barely get one, we'll go with the easily acquired Innings Pitched (IP). This obviously overlooks some latent ability of young relievers attempting to get a starting role, but I argue that talent usually rises to the top and starters almost always make themselves known.

Visually, the method has already been established with the evolving DiamondView for batters. It takes the four statistics and puts them into two perpendicular axes in an attempt to output a describable "player shape," and it works. We'll stick with that.

For the data, I'm using the award-winning Fangraphs.com database and combining several pages of data for both starters and relievers. The result is a shockingly large combination of data that I've pared down to 222 players from the 2009 season*. Each player then has a percentile fuction applied to his data set that tells us exactly where he ranks in each skill set.

K/9 is arranged top from the top down, with the player(s) with the highest at 100 and the player(s) with the lowest at zero. A negative function is applied to BB/9 and the set is then arranged from least negative to most negative and shows the player with the smallest BB/9 at 100. GB/FB is arranged from biggest to smallest, and the visual result is nice--the better the groundball pitcher, the lower his DiamondView will stretch as it approaches 100. Finally, durability is IP arranged from most to least, with the most prolific and longest-lasting starters at 100 and LOOGYs and one-out relievers closer to zero.**

*For projection purposes (not attempted here), a different data set will be required--probably CHONE. I have yet to see G/F on any projection but believe the ratio is more of a career asset (or liability) and will probably use each player's career number for that point of the graph. Suggestions for this aspect welcome and wanted.

**The visual assumption will be that the larger the durability, the better. Similar to the G/F ratio, the result will be something that tells a story instead of necessarily making a conclusion. Combined with the other stats, the result is something that truly tells us everything we need to know about what type of pitcher we're looking at.

Preambles aside, I present to you the DiamondView Composite Pitcher Evaluation. It's a visual representation of the most relevant stats available that tells a relatively complete story of pitcher type. It attempts to answer the questions: "Is he a starter or a reliever? Can I count on him to strike a guy out? Can I count on him not to load up the bases? If I bring him in with someone already on base, will he give up a pop-fly or a ground out?"

For presentation purposes I chose a few players at or near the top of the each metric. Take a look:

AJ Burnett is a decent starter who gets a fair number of strikeouts but tends to walk a number of batters. Compared to his peers, his batted pitches are just as likely to pop up as they are to be grounders. 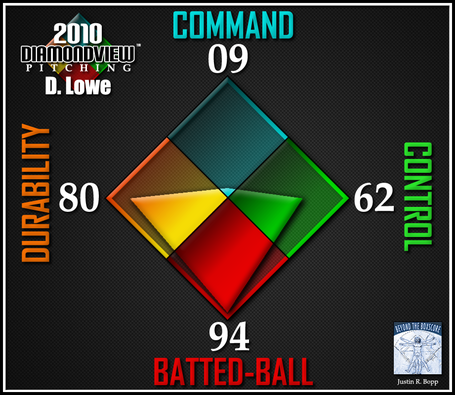 Derek Lowe is a classic ground ball specialist that, according to 2009 results, rarely gets strikeouts but eats a high number of innings. 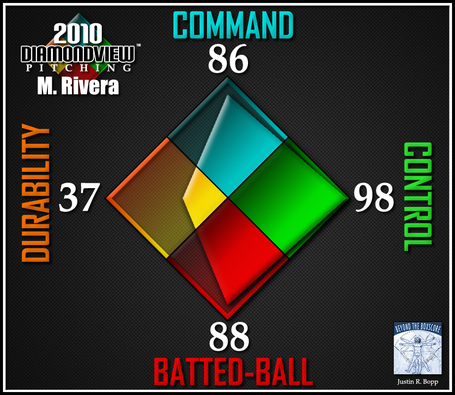 Mariano's DiamondView not only shows the value of the presentation for identifying relievers, but his value to the team as well. He strikes a ton of guys out and induces a high amount of grounders--and the last time he walked somebody was probably some grandma while crossing the street (all Yankees are clean-cut good samaritans, remember?). 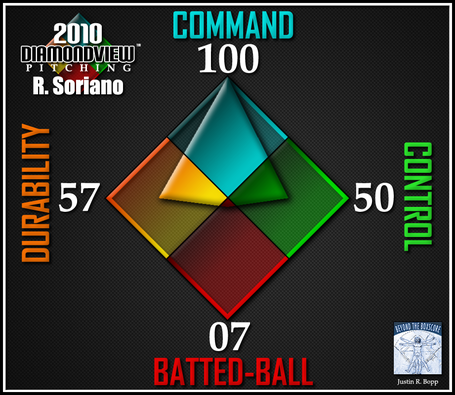 Rafael Soriano looks much like we would expect--a high powered strike out guy that creates a lot of pop-ups...and home runs. 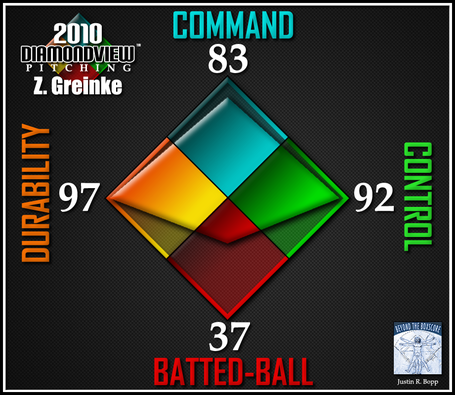 Zack Greinke is my favorite player in all of baseball and he should be yours too. He strikes out almost everybody and rarely walks anybody--all while going further into the game and pitching more innings than nearly everybody in the league. That command and control comes at a cost, though. He's vulnerable to pop-ups, and in the wrong house, the long ball.

Let me know what you think. I know there has been quite a bit of anticipation for this from both of us. If we can establish the meaning of the visual together and have a shared experience in its interpretation, I think we really have something quite valuable. I look forward to your thoughts and comments. Have at it.

I'd like to thank Satchel Price and Walter Fulbright for their consultation on this project, and to everybody else here at BtB for their continued support. Together, we can all bring a deeper understanding of sabermetrics and make them easier for everybody to understand.