If you've been paying attention to this series (or are somewhat of a masochist), you know that the 2009 DiamondView series ended with the Los Angeles Dodgers with calls for something a little less in the past and a something a little more in the future, predictive if possible. One thing lead to another, and blammo, the DiamondView 2.010 series was born.

Rather than go straight back to LA, the new series stayed in the NL West and began with the Colorado Rockies, and continued with the Arizona Diamondbacks, the San Francisco Giants, and the San Diego Padres. To make each of these even better, we invited our favorite writers from each team site to provide guest commentary for each highlighted player, and the combined results have been absolutely fantastic.

It is with that in mind that the final DiamondView stop in the NL West is with the Los Angeles Dodgers, and I couldn't be more proud of how this compares to the 2009 version. It really is impressive if you look at both side-by-side. On top of all that sweetness, I am excited to announce that one of my absolute favorite writers on all of SBN, Eric Stephen of True Blue LA, is here to offer guest commentary for the Dodgers edition. His comments follow each graphic. Let's begin. 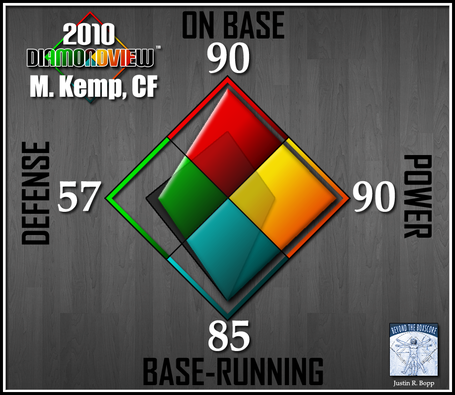 Kemp is the envy of mere mortals.  He has power and speed, won a Silver Slugger and a Gold Glove, and topped off his offseason by dating a pop star.  He made great strides in 2009, but 2010 looks to be The Year of The Bison, as Kemp moves up the ladder of stardom. 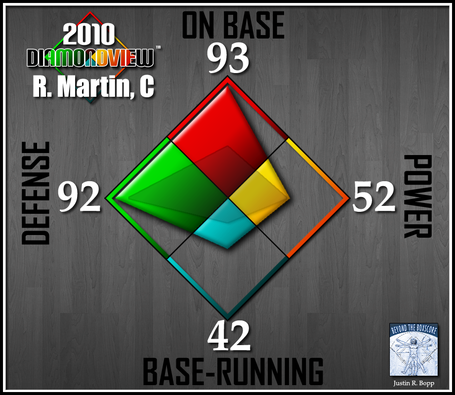 Among the many things lost when the Yankees moved from Yankee Stadium II to Yankee Stadium III was Russell Martin's power.  Heading into his second straight All-Star game in 2008, at the previous home of the Yankees, Martin had a career line of .289/.373/.450, with one home run every 38 PA.  In the season and a half since then, Martin is a shell of his former self, hitting .253/.358/.331 with a homer every 85 PA.  A rebound by Martin is sorely needed by the Dodgers if they plan to win their third straight division crown. 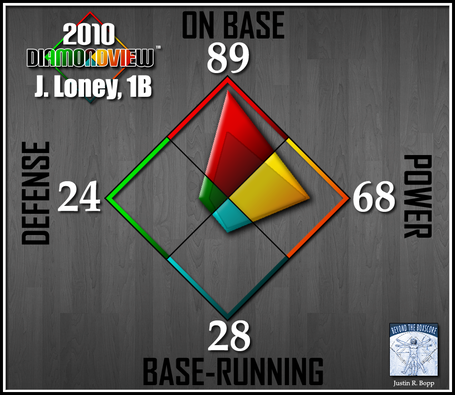 Loney has struggled mightily at Dodger Stadium, which has dragged his overall production down into the nearly-unacceptable-for-first-base realm, but on the road he remains a productive hitter (.309/.387/.475 on the road in 2009; .320/.375/.524 career).  Fun fact: between August 2008 and September 2009, Loney went 343 plate appearances without hitting a home run at Dodger Stadium. 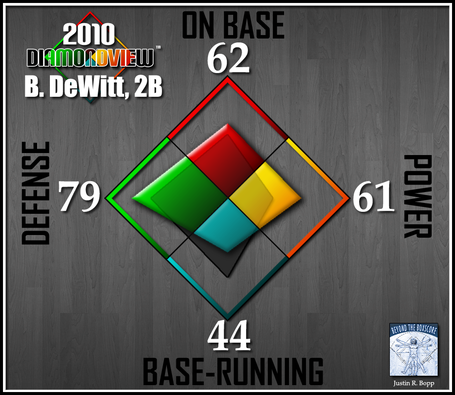 His best asset is his plate discipline, which was intact (48 walks / 44 strikeouts) in the Pacific Coast League despite his otherwise subpar offensive season.  When evaluating his 2009 season, keep in mind DeWitt was optioned to Albuquerque on six different occasions last year.
(ed. - Carroll and Belliard (just signed) will both be competing for time at 2nd) 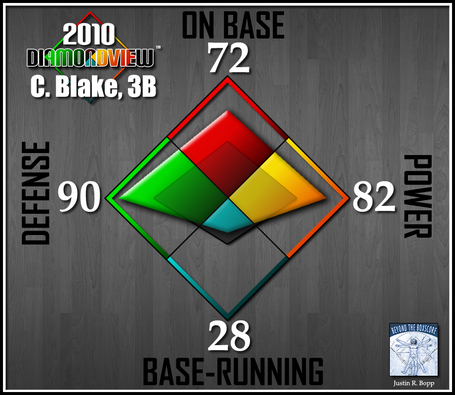 Will Blake, coming off a career year at age 35, be able to repeat a 4.2 WAR season? Probably not, but I wouldn't put anything past The Beard­®. 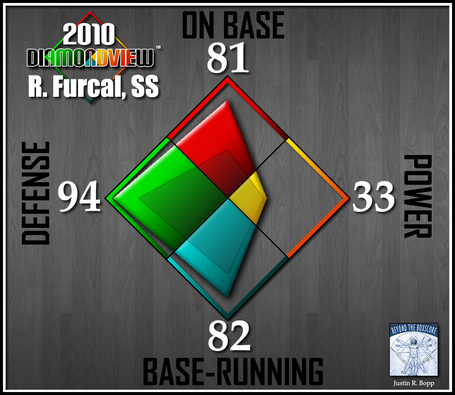 I would like someday to be able to tell my grandchildren that I witnessed a healthy full season from Rafael Furcal in a Dodger uniform.  Worst case scenario: I can always lie. 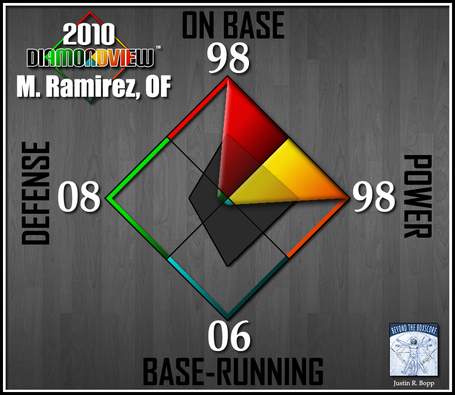 In 2010, we will get the answer as to whether Manny's second half decline was due to his hand injury or due to age and/or a lack of fertility medication.  At any rate, having Manny in the lineup for 130-140 games will be better than the 104 games he played in 2009.  Offensively, the Dodgers will go as far as their outfielders will take them. 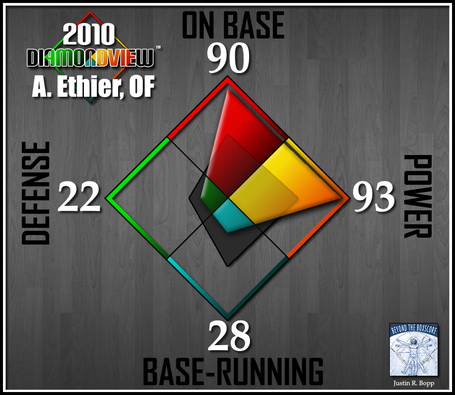 Ethier's progression as power hitter has been a pleasant surprise, and he has transformed himself from "3.5" (the nickname given to him early in his career, implying he wasn't quite everyday outfielder material) into Silver Slugger.  Also, I'm not sure Ethier is as bad defensively as some of the advanced metrics say he is, but perhaps a full season of not having Orlando Hudson hawking every fly ball into short right field will help.
LA Dodgers Team Composite 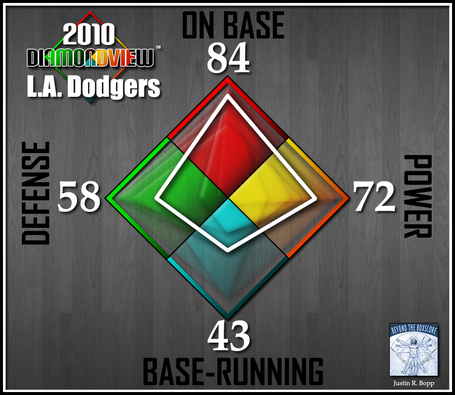 The DiamondView reminds us of what we already kinda thought: the Dodgers have a lineup that is the absolute upper echelon of teams that can get on base and their power is certainly fertile ground and will stand up against nearly any team. That said, team defense isn't anything to write (or throw) home about, but holy cow look at that base-running--clearly in the getting-outrun-by-the-hotdog-suits territory. Combined with an eventual look at pitching, LA will be aiming for the title yet again, but will be getting tough competition this year from Colorado (again) and increased attention on Arizona will be required. - Justin

Thanks again to Eric Stephen again for his contributions. If you're not familiar with his work, he's the manager and lead writer over at True Blue LA--and it looks like he just announced he contributed to the 2010 Maple Street Press Dodgers Annual. Check it out.

Next up: The DiamondView takes on the AL Central!