Active Multi-Gold Glovers: Do they deserve their reputation?

Share All sharing options for: Active Multi-Gold Glovers: Do they deserve their reputation?

While I usually feel at home writing about catchers or relief pitchers, I recently published one of my favorite posts—one about seeing if historical WAR data justified the induction of Hall of Famers who were primarily inducted for their defense. You know, guys like Ozzie Smith and Brooks Robinson (yes) or Ray Schalk and Bill Mazeroski (no).

One of the great things about historical WAR is we can use it to confirm (or sometimes contradict) what our eyeballs told us (or previous generations) about a player's range, arm, ability to turn two, catching skills, etc. Instead of Hall of Famers, I'm going to focus on active Gold Glovers. Specifically, I generated a pool of players who have been awarded three or more Gold Gloves (with the giant assumption that these players are widely considered great defenders) and have played ten or more years (because I wanted players with an established body of work to see where they begin to stand in Hall of Fame talk). I also added Ichiro because, well, he's awesome and he obviously has a well-established body of work. Here is the pool (all data from Rally's database):

Let us start by graphing how many runs above (or—gasp—below) average they were on defense according to Rally's metrics: 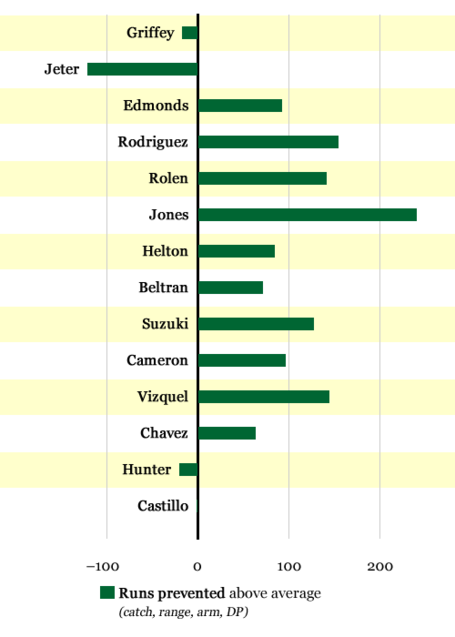 Well, then. Two things stick out like sore opposable thumbs.

But beyond that, let's take a brief look at each guy on the list:

Ken Griffey won ten Gold Gloves despite a career TZ of -67. His arm made most of that back, rating at +50. What's the popular consensus? Did he get those Gold Gloves more for his arm or for his range? Worth noting is that through 1997, Griffey was +48 in TZ. His last two years in Seattle and his time spent in Cincinnati really pulled down his career total. With his offense at +471, though, there's no question that Griffey is a first ballot Hall of Famer.

Jim Edmonds is well known for his highlight reel range, but his arm was just as impressive. Erik Manning was the first in my network to start banging the Edmonds in 2014 drum. I've gone from "nah, really?" to "wow, yeah". His numbers are Hall-worthy. Period. He reminds me of Larry Walker—slowly and quietly providing ridiculous amounts of value.

Ivan Rodriguez's spot in the Hall has been cemented for what seems like a long time. He has a reputation as one of the best defenders behind the plate of all time. The numbers completely back that up. While not a dominating player on offense, he was above average for a long time. Combine that with legendary defense and there's no question he'll be a Hall of Famer.

Scott Rolen is another surprising one. Would you have guessed that his career WAR is better than Hall of Famers like Ryne Sandberg, Yogi Berra, Dave Winfield, and Wilie Stargell? He rides a ridiculous +141 TZ to get there, but also appears to be very underrated on offense. I believe Rolen has absolutely no chance of being inducted. I still have a hard time accepting he's Hall-worthy, but damn. Those are some good numbers.

Andruw Jones' defense was out of this world. With range of +182 and an arm at +58, words really cannot express how good Jones is... or was. Over the last three years, his range is -10, so the longer he plays the longer he's going to hurt that amazing career mark. But is he going to be a Hall of Famer? My guess is no. He's currently providing too little value and will be remembered for this stretch of his career. Hard to induct a guy who was basically done at 30.

Todd Helton's numbers feel a bit low to me. I guess playing your entire career with the Coors park adjusment will do that. Helton is the only first baseman on this list. First basemen are tricky. It is really hard for a first baseman to provide so much defensive value that he overcomes the positional adjustment. Helton comes relatively close (-28 runs after adjustment) but he still gets docked a bit. His offense was awesome, even after park adjustments. I feel as though he'll get in, however, while guys like Edmonds and Rolen don't. According to WAR, Helton is very similar to Will Clark. Personally, I think Clark was screwed by getting dropped after one ballot. I'm not sure he's a Hall of Famer, but he deserved better. Helton will be very interesting.

Carlos Beltran does everything well. His arm is a bit above average, but is range is excellent. Offensively, Beltran added to his bat with great work on the bases and a knack for avoiding the double play. He has certainly worked his way into the Hall discussion, and his defense has helped him get there. At seasonal age 32 last year, he still has a lot of baseball left.

Ichiro Suzuki has managed to make quite a name for himself already. His offense is great—what he doesn't accrue by walking he makes up with tons of hits. He adds to it with his speed and ability to avoid the double play. On top of that, he's been well-deserving of his nine Gold Gloves. He shows a ton of range while also having a very valuable arm. Like Beltran, Suzuki has built a lot of value rather quickly by excelling in every facet of the game. Even with his late start, he's already passed 50 WAR, so he is very much in the Hall of Fame discussion even if you ignore his Japanese career. Amazing.

Here in Red Sox Nation, the Mike Cameron move has been widely panned by the media. I don't have to explain to this crew that defense is valuable, and Cameron's is. While is arm is average, his range is top notch at +97 runs. That's more valuable than he was at the plate (+72). Cameron's speed and baserunning boost his overall offense to +126 (lower than many guys on this list but ahead of guys like Andruw Jones and Ivan Rodriguez) while is defense + positional adjustment comes in at +115. At 46.6 WAR, he's probably not a Hall of Famer. But hey, he's got a better total than Jim Rice. Tell that to a stat-ignorant Red Sox fan.

Omar Vizquel is someone I've seen a bit of Hall of Fame support for. Those arguments cite his eleven Gold Gloves and state he's one of the best defenders at his position of all time. Well, with a TZ of +139, there's clearly something to that. When you add his range, double play skill (negligible at +5) and positional adjustment (a whopping +142 for playing so long at shortstop), you get defensive value of +286 (ahead of Jones and just behind Rodriguez on this list). His defense is Hall-worthy. But what about his total value? At the plate, he was worth -205 runs. Ouch. His total offense was -204. Over a long career at a premium position, that comes out to 43.1 WAR. While that total isn't jaw-dropping, it occasionally will get you in the Hall of Fame.

Who is comparable to Omar Vizquel? I would argue that he is remarkably similar to Hall of Famer Rabbit Maranville:

I mean, they are really similar. For Vizquel, the good news is that Maranville is a Hall of Famer. The bad news is he's generally considered a very poor selection.

Wow, remember Eric Chavez? We can keep Chavez out of the Hall of Fame talk, but one thing we can acknowledge is that he earned his Gold Gloves. His TZ of +61 isn't Rolen-like, but it was still very good. I was surprised his bat (+108) rated higher than many others on this list.

I don't really get Torii Hunter. He's had some good TZ seasons (+16 in 2001, +12 just last year) but a lot of negative ones (worst was -12 in 2007), leading to a career total of -25. This is a guy with nine Gold Gloves who always goes crashing into walls on SportsCenter. What gives? Fangraphs has Hunter at -14.5 since 2002 (they use UZR). In that time, he's -34 in TZ. But the two metrics are very inconsistent. Despite Hunter's nice year in TZ last year, his UZR was below average. A Twins fan told me Hunter tended to play deep to get those balls at the wall. Perhaps he wasn't getting to many balls in front of him that other center fielders got to? I suppose that's possible. Either way, we can end Hall of Fame talk for Mr. Hunter before we start it.

Finally, we have Luis Castillo. Not much to say besides the fact that he won three Gold Gloves while being a league average defender for his career. But what did those three years look like? He posted TZs of +12, +16, and +10. You know? Those are Gold Glove years. The rest of his career? -36 runs. Like Jeter, they actually managed to give him Gold Gloves during his best defensive years. The only other time he posted a positive TZ was his rookie year. He managed +8 runs that year in just 41 games. Again, no Hall debate with Castillo.

I'll leave you with one more bar graph–this one attempts to show career value, but in runs above average instead of wins above replacement. In this case, the defensive runs include the positional adjustment, since that really contributes to defensive value. I like this because you can see the value of a player's defense in relation to his offense. 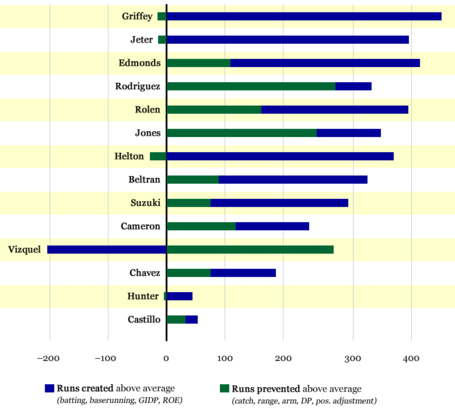