Where in the World are the Olympic Medals Going?

Share All sharing options for: Where in the World are the Olympic Medals Going?

It is time again for my bi-monthly look at some sport other than baseball.  The other night on the news, I saw the top countries in the medal count at the Winter Olympics and noticed that no Scandinavian countries where on the list.  I thought remember them dominating Winter Olympics in the past.

I went back and looked at all the previous Winter Olympics and looked at what percentage of medals were won were by various regions around the world.  Instead of using exact medal count, I weighted each medal (3 points for gold, 2 for silver and 1 for bronze).  I grouped the countries into the following regions:

Here is a chart of percentage for each year.  The years are not evenly spaced, it is just the years that Olympics occurred. 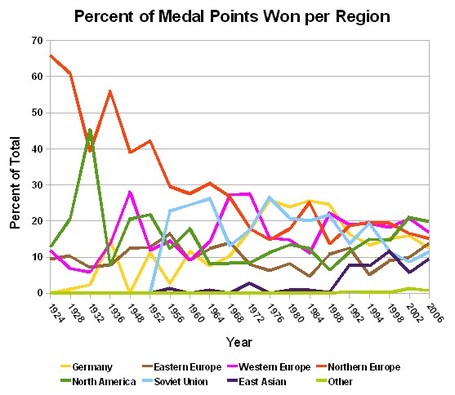