Welcome back to the BtB Mailbag, where every week we take our best shot at your best questions. Send your questions to btbquestions@gmail.com and include your name for inclusion.

With my Orioles blog currently in limbo, I was sent quite a few questions about the team's moves and potential moves this week. The O's may have finished the season below .500 for the 13th year in a row - and they may do some things I disagree with - but the situation isn't completely hopeless.

What are your thoughts on the Mark Reynolds trade, the purported shortstop acquisitions, and bringing Koji Uehara back?

On Reynolds' Matt Klaassen already looked into the slugger's value, pegging him as a 2-2.5 WAR player for next year. That seems pretty reasonable enough to me, and that relatively low total is why I wasn't at all excited about the trade rumors before the deal went down. Sure the home runs and walks are great, but he strikes out so much that his offensive potential is capped, and his glove-work leaves quite a bit to be desired. Reynolds being under contract already less than even arbitration rates is a plus, and leaves his excess value to the O's at somewhere around $10 M.

In return for Reynolds, the Diamondbacks picked up a couple of hard-throwing relievers in David Hernandez and Kam Mickolio. I never became as high on Hernandez as others did after his transition to the bullpen - when he started K'ing more than a batter an inning - since I didn't think the success would last and that his spotty control and extreme flyball tendencies would limit him to being a solid reliever instead of a closer-type. Mickolio also throws hard, but has even worse control than Hernandez. Giving up all those cost controlled years is tough, but I think it's a fair deal. If Hernandez settles in as a 0.5 WAR reliever and Mickolio contributes a bit here and there, then that's right around $10 M going the other way.

It's doubtful that Reynolds - and his 35 HR and 250 K's - are going to take the O's to the playoffs, but trading relievers for a position player isn't terrible and the move does give Josh Bell some more time in the minors (hopefully - the guy was clearly not ready last year, but trading him now would be selling mighty low). Still, the philosophy behind the move is a tad troubling (it seems like a continuation of what brought Mike Gonzalez to Baltimore for $12 M).

Trading Nolan Reimold for Jason Bartlett would have been pretty dumb, and then the "news" that the O's were including Alfredo Simon in the deal (as opposed to having the Rays throw in another player) was crazy. Bartlett's a fine player, but he's only under team control for one more year while for Reimold it's five years. Baltimore should be doing the exact opposite right now - trading guys heading toward free agency for cheap young players - and this deal would have been a much stupider version of the Reynolds trade. Luckily the swap has been kiboshed, and Bartlett ended up getting dealt to the Padres.

The team is also looking into J.J. Hardy, who is my preferred target. I was hoping that the Twins would non-tender him, but no such luck. Despite falling off offensively in the last couple years, Hardy's glove-work (career +11 UZR/150) makes him a still valuable - and potentially slightly underrated - player. Even if Hardy's only a 2.5 WAR player next year (which is about what he did in 2010 in just 101 games), it's doubtful he'll get more than $7-8 M in arbitration. That would leave the O's with around $5 M in excess value, assuming a going rate of $5 M per win. Then there's the upside of Hardy bouncing back to his 4+ win self, which is a non-trivial possibility (if not extremely likely).

The deal supposedly in the works (and possibly completed by the time this posts) is Hardy and infielder Brendan Harris in return for minor league relievers Brett Jacobson and Jim Hoey (both of whom throw hard, but neither of whom is likely to be a top-notch major leaguer). The deal looks like a clear win for the Orioles, but Harris is already under contract for ~$2 M and one can only hope that he is even replacement level. That cost cuts into Hardy's value and evens things out some (though the $500 K the Twins threw in mitigates that somewhat), but I still think Baltimore comes out ahead on value (they were already well ahead on talent). My preference would be to immediately lock the 28 year-old shortstop up to, say, a three year deal (including 2011), in order to help bridge the gap until Manny Machado is hopefully ready.

The Orioles re-signed Koji Uehara, who was great in relief last year - featuring an 11.0 K/BB ratio - (and pretty good when he was on the mound as a starter in 2009), which raises the question; why didn't the team off him arbitration? Worst case scenario was that he would have come back on a slightly more expensive deal, but Koji was reportedly getting multi-year offers anyway and at least if he had left the O's would have received a draft pick. The one-year deal for $3 M with some incentives and a vesting option looks pretty solid to me, and if he's healthy for even most of next season there's a good chance he'll help the team lock down some late inning leads. And have you seen the dude's sideburns? Awesome.

All these moves probably still keep the O's in 5th place, but if enough of the younger players on the team start to reach their potential then they have a chance to finally break the streak of losing seasons. Maybe.

Tangentially Orioles related, but Jordan asks "What's the big deal about Rafael Palmerio doing steroids? He was an outside shot at best anyway, wasn't he?"

I don't know what the big deal is (people like being sanctimonious), and Raffy's defense seems a little more reasonable in light of Miguel Tejada getting caught. Still, when a player that's considered good but not an all-time great is an elite company with Hank Aaron, Willie Mays, and Eddie Murray (that would be the 3,000 hit / 500 home run club), it makes some sense that people would look for an easy way to bring him down. Without the steroids issue, it's not crazy to think that Palmeiro would have had a decent chance of getting elected to the Hall of Fame. The previous mile-stones look pretty good on paper, and his 65.7 rWAR puts him close to the borderline but above - amongst others - Willie McCovey (65.1), Tim Raines (64.9), and Ernie Banks (64.3). Palmeiro didn't have the highest peak though, and never finished higher than 5th in MVP voting. Still, here's Raffy vs. Steady Eddie in career WAR courtesy of FanGraphs: 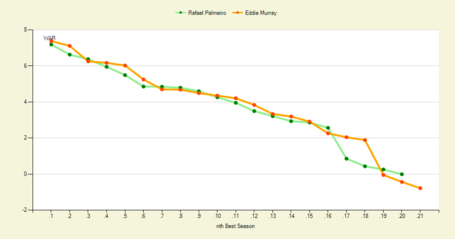 So, maybe not an outside shot at best (without the PEDs). And if some voters give him extra credit for having one of the sweetest swings in memory, he may still get in anyway (eventually).