Amidst the flurry of deals that have gone down over the past week (and those that will continue throughout the Winter Meetings), I'd like to focus on two that brought versatile relief pitchers to new leagues.  On Saturday, the Brewers traded Carlos Villanueva to the Blue Jays for a player to be named; earlier in the week, on Thursday, the Angels signed former Met Hisanori Takahashi to a two year, $8 million contract.

Although Villanueva was strictly a reliever in 2010, he made 27 starts in addition to consistent relief work for the Brewers from 2006-2009.  Takahashi, an MLB rookie in 2010, filled pretty much every role over the course of the year.  He was an innings-eating middle reliever at the beginning of the season before being moved in the rotation in May.  He returned to the bullpen in August and took over as the Mets' closer in September.  I've chosen to examine both Villanueva and Takahashi in this post because they have quite a few similarities beyond the fact that they both switched leagues this week.

While it appears that both pitchers are going to be spending the majority of their time in their respective bullpens next year, they both have significant experience as starters and don't profile as "typical relievers" based on their stuff and pitch selection.  I'll look at Villanueva first, then Takahashi.

I detected four pitches from Villanueva - a straight four-seam fastball, a straight change that gets a few different looks to it (maybe another type of changeup in there as well?), a slider, and a curveball.  (Note that there may be a few two-seam fastballs lumped with the four-seamers.)  The graphs (click to enlarge) shows the spin deflection from the catcher's perspective for each pitch, and the charts show some results for each pitch. 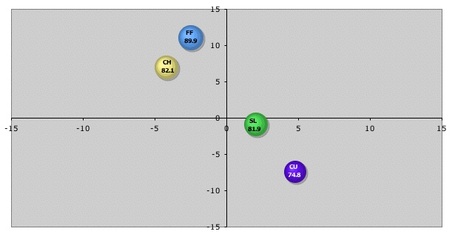 Villanueva's overall whiff rate of .324 ranked 7th in the majors among pitchers with at least 200 opposing plate appearances.  The slider is elite, and the change doesn't look bad, either.  There were a ton of liners, particularly off of the fastball, which is not good news.  What's particularly interesting is that, as you can by the pitch percentages, Villanueva throws the four pitches with more or less the same frequency.  Another way to show this is by looking at what Villanueva throws in each count: 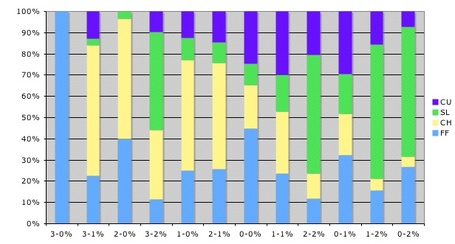 I was surprised by the ridiculous amount of changeups in hitter counts, both to lefties and to righties.  He's definitely in the "crafty" category and could best be described as a pitcher with unusual patterns.  Let's move on to Takahashi. 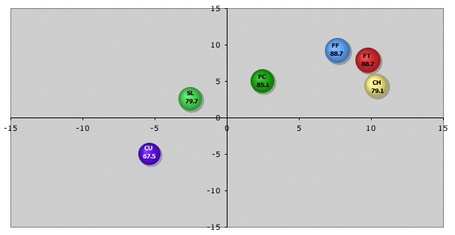 The curveball is slow and he'll sometimes drop it into the low 60s.  The cutter was only used a handful of times, so disregard the rate stats for it; also, the four-seam/two-seam split is shady.  Like Villanueva, Takahashi didn't throw a whole lot of fastballs last year.  The change looks like a really good pitch, and Takahashi used it with great frequency.  Like Villanueva, Tak has a reputation as a pitcher without patterns; let's look at the count-based data (encompassing Takhashi's entire season, both as a starter and as a reliever): 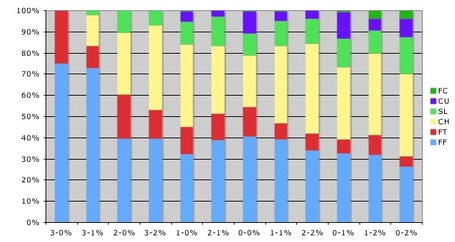 So, I guess my takeaway would be that neither of these guys throw very hard, they don't appear to have very effective fastballs, and they have to rely a lot on their offspeed stuff to succeed.  Though they'll be pitching in relief in 2011, they both have starters' repertoires and probably would be able to easily slot into their team's rotation if needed.

The data in this post are courtesy of Joe Lefkowitz's tool.