Share All sharing options for: Ted Simmons vs. Hall of Fame Median

Today, we'll hear another announcement that Ted Simmons was not inducted into the Hall of Fame. And it's too bad, because he deserves it. 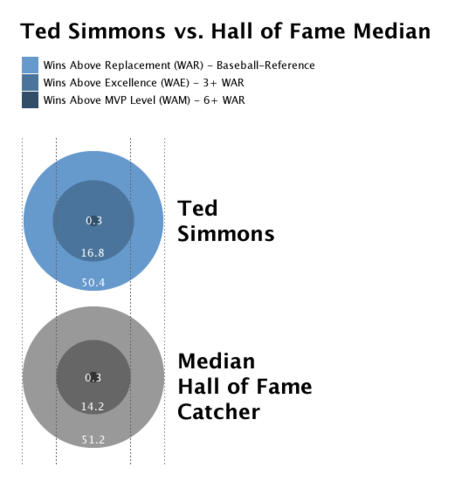 Now, allow me to overanalyze…

There are currently 13 catchers in the Hall of Fame. Here they are, by WAR (thanks to Baseball-Reference):

The Hall of Fame Catcher median of 51.2/14.2/0.3 probably most closely resembles either Bill Dickey or Mickey Cochrane. But, to me, the Hall of Fame catchers are clearly split up into three tiers of four players each and one "wild card".

The "wild card" I spoke of, of course, is Roy Campanella. His total WAR puts him in the "Meh" Tier, but his WAE and WAM make it obvious that if he was given the opportunity of a full major league career, he would be among the better catchers ever, statistically.

So, let's go back to SImmons. He obviously fits right there in that "Median" Tier quite perfectly. That, to me, makes him an easy choice as a Hall of Famer. He's clearly better than a full third of the catchers in the Hall of Fame and on the same level as another third. I'd make the argument that he's better than Hartnett and right there with Dickey, Cochrane, and Ewing. So, we're talking one of the eight best Hall-eligible catchers ever. Clearly, that's Hall of Fame territory.

Now, I said "Hall-eligible" catchers because we have some pretty good ones that haven't hit the ballot yet. Specifically, Mike Piazza will be up for induction soon and Pudge Rodriguez and Joe Mauer are still active. Yes, Joe Mauer. I went there. I'll already call him one of the best catchers ever. And in a few years, I'll be ready to call him the best catcher ever.

Rodriguez and Mauer will go in that "Elite" Tier. Piazza could, though his defense brings him back closer to the "Median" Tier. You could put him in either. So, this makes Simmons one of the 11 best catchers ever, in my opinion. Still Hall-worthy stuff.

But wait! Simmons surely isn't the only catcher to be snubbed, right?

In several past articles, I've come up with a list of six catchers I routinely talk about in these types of debates:

Torre is destined to join John McGraw in the "Players with Hall of Fame careers that were forgotten when they were inducted as Managers" club. He fits nicely with the "Median" tier. One problem is that Torre didn't quite catch half his games. But that positional difference is already reflected in his WAR. After Simmons—and a few wins before the rest of the pack—is Tenace. Tenace also fits nicely in the "Median" tier, though the overall WAR lags a little behind the rest of the group.

I like Schang, Munson, and Freehan. They are pretty clearly better than Schalk, Ferrell, Lombardi, and possibly Bresnahan. It's tough to put them all in the Hall of Fame for that reason, though. That's the tough thing about Hall mistakes. You want to put players in that are better than existing Hall of Famers, but in some cases there's just so damn many players that are better. I mean, if you're gonna put in catchers who are better than Ray Schalk, start making the cases for Lance Parrish, Jim Sundberg, and Mickey Tettleton (all of whom I happen to love).

Once again, back to Simmons. He's better than a bunch of guys who are in the Hall of Fame. And with the exception of possibly Torre (though he's a bit of a special case), he's better than anyone at the position who is not inducted.

Give the recent track record of the Veterans, we may not see anyone get inducted today. But if we do, Simmons deserves to be among the inducted.