Today we're going to focus on two findings I found while looking at AFL data this year.  The Arizona Fall League, for those who don't know, is a winter league between 6 teams that takes place during late october and early november in Arizona.  Major league teams send AA and above prospects (and each team can send 1 A-ball prospect) to the AFL to get extra work.  Two ballparks in the AFL, Surprise and Peoria, which house 3 of the 6 teams, have had Pitchf/x installed over the last two years.

Now it's known this year that the hitting prospects in the AFL were of a higher caliber than the pitching prospects.  So our results overall should be at least somewhat hitter friendly.  Still I was curious how curveballs did against players who were essentially minor leaguers and came upon another topic, Defense in the AFL, as part of my look.  We'll start with a look at defense in this league after the jump.

In reality, people really shouldn't care about Defense in the AFL.  And teams almost certainly do not.  The question isn't really about fielding the best teams (kind of hard to do that anyhow, given that each AFL team has players from multiple MLB franchises), but rather about sending prospects to get some extra work (and to be seen by scouts).  There are instances where its a prospect's focus (for example, Mets 1B/LF Daniel Murphy tried out 2B in the AFL after being in the major the year before), but those situations aren't really likely to result in good defense either.

Why do I bring this all up?  Because I want to call to attention an important thing to remember when looking at AFL data...the defense behind the pitchers really isn't good.  At all.

For example, lets look at the Average Run Values for each type of batted ball type in the AFL compared to the MLB averages in 2010:

Table 1: Comparing AFL and MLB results on different batted ball types.
Legend:
BACON:  Batting Average on Contact: Basically it's BABIP, except it includes Home Runs
SLGCON:  Slugging on Contact: Similarly, this is basically the SLG of these batted ball types
*NOTE:  For various reasons of how i tab-up batted ball results, these results may not perfectly match others' results.  The point remains valid, however.

Note that in the AFL, batters have less power and can't hit as many HRs as MLB Batters.  The HR/FB in the AFL is only 7.98%, while in MLB it's at 11.55% (excluding pop-ups).  That's somewhat of a big drop.  And yet, this is compensated for by an increased amount of triples, doubles, and just a decreased out-rate in general.  As a result, the average (run) value for a fly ball in the AFL is worth DOUBLE as much as the average value for an MLB fly ball, despite the lower frequency of HRs.  Ground Balls and Line Drives show a smaller, but still decent-sized, improvement in run-scoring value in the AFL as compared to MLB (Pop Ups are basically irrelevant).

A clear cause for this can be seen in the BACONs of these batted ball types.  Now yes, some of this can be caused by what we think of as better hitters (compared to pitchers) hitting the ball harder, such that ground balls and fly balls are closer to line drives, while line drives are hit harder.  But the difference here is too large for that and it shows up even on ground balls, which shouldn't see too much change and really shows up on fly balls (though some of that may be stringer based).

The conclusion seems to be simple:  AFL batters may be better than AFL pitchers, but they benefit at least a bit (and probably a lot) from shoddy defense preventing a bunch of ball in play from turning into outs.

Back to the Usual Stuff: Curveballs in the AFL

I decided to take a look at curveballs in the AFL for two reasons:
1.  Pitchers in the AFL probably have their fastballs somewhat down, but their secondary stuff is probably still developing, and thus it provides us with a look at a developing pitch that could be essential for future success.
2.  Minor leaguers, like AFL players, tend to be said to have an issue, upon being called up, dealing with breaking stuff as it's not the type of pitch that they see too frequently in the minors.

So my thoughts were the following:  We'd see curveballs with less developed movement, which should result in less effectiveness, but this should be countered by batters having an increasingly hard time with these curveballs.

Well so here were the results:

So here we see that increased whiff rate, and an identical GB Rate for AFL Curveballs, showing how these batters perhaps find it harder to hit the pitch.  But when they did make contact, they crushed the ball.  Now what caused this?  After all, the ground ball rate was virtually identical for both leagues!  Two things to note of course: 1.  This is a smaller AFL Sample size (128 curveballs were hit into play) and 2. As we said above, AFL defense is not good.  Still, this is a large difference that is odd.

So perhaps the difference is that the AFL curveballs aren't moving as much?  Doesn't seem to be the case, when I took a look.  Are the release points clearly differentiated in AFL pitchers?  Not so much.  Are curveballs being thrown at different times in the count?  Nope.

Well how about location?  Well, AFL curveballs are in the strike zone less frequently (46.8%) than MLB Curves (53.8%).  But this doesn't seem to help us understand this...after all, the less often in the zone the pitch is, you'd think it would result in worse contact.  How about the exact locations in the strike zone?  See the graphic below: 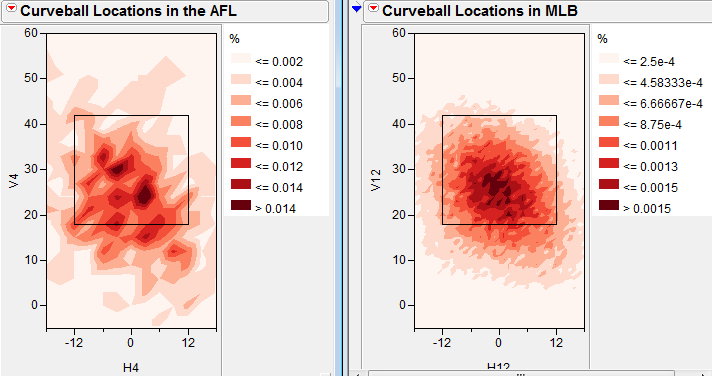 Figure 1:  Heat Maps of Curve ball locations in the AFL (Leftmost Graph) and MLB.  The Black box is the strike zone.  The darker the color red, the more frequently did curveballs hit that location.

I apologize for the quality of the left-most heat map (The small sample size resulted in me having to use larger buckets to collect the data), but you can see here that the general curveball locations seems to be basically the same in the AFL and in MLB. So this doesn't solve our mystery either.

My best guess is this is the result of sample size and defense issues.  But it's interesting to see that the AFL batters do have the higher whiff rate we'd expect from minor leaguers against curves.  Of course, this effect may be partially caused by the fact that AFL curveballs are in the zone less frequently, but it's still interesting.

COLUMN NOTE:  I really would appreciate ideas for future posts, and would love to try and answer questions.  If you guys have any pitchf/x questions post them in the comments or tweet them to me @garik16.  Thanks.