Laying It Down, Part 1

Share All sharing options for: Laying It Down, Part 1

I've been thinking a lot about bunting recently.  Considering all of the information we have about offensive statistics, it's surprising to me that we don't have more data on bunting readily available - Fangraphs has data for bunt hits and sacrifice bunts, but it's much more difficult to find information for bunts that aren't hit into play.  Certainly, one of the most important aspects of being a good bunter is being able to consistently get the ball in play, so I believe that it's just as important to look at foul and missed bunts as it is to look at fair bunts.  Combining the Fangraphs bunting splits leaderboard with PITCHf/x data can give us a more detailed look at who the league's better and worse bunters are.

There are three main things that I was able to quantify with the data I was working with - the frequency with which a batter attempts to lay down a bunt, the frequency of bunts put into play, and the overall quality of the bunt.  Before I get more in depth on the metrics I've been working with, I think it would be best to show some generic bunting benchmarks for the 2010 season.

Who attempts to bunt the most? 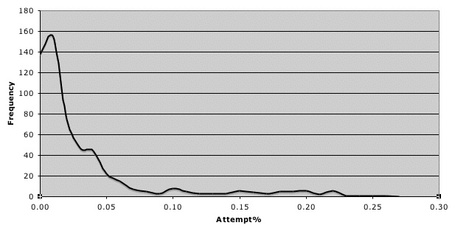 Of the qualified hitters, there were 138 without a single bunt attempt, and a few more with an attempt percentage between 0% and 1%.  Approximately 90% of the qualified players had rates under 10%, and the vast majority of the players over the number were pitchers, with Tim Lincecum (.252), Aaron Cook (.247), Livan Hernandez (.234), Zach Duke (.223), and Dave Bush (.218) leading the charge.  Raising the minimum number of swings to 200 (and thus eliminating pitchers) gives us these leaders:

On a counting level, Juan Pierre was the clear champion of bunt attempts with 111; he was the only player with more than 100.  Next closest were Nyjer Morgan and Erick Aybar with 95 and 94, respectively.

One more thing on attempt percentages.  Common baseball sense would tell us that the guys who are less offensively adept would be the players resorting to bunting most often.  Based on these data, that would appear to be the case.  Keeping the 200 swing minimum, here is attempt percentage plotted against linear weight runs per 100 pitches (the numbers aren't exact, so don't consider 0 to be the exact 2010 league average). 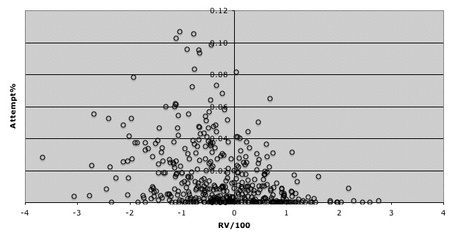 For the most part, the frequent bunters are to the "below-average" side of the chart.  If you were wondering, the outlier with a bunt percentage of just over 6% and and an 0.69 runs per 100 is the Tigers' Will Rhymes.

Who gets it in fair territory?

As I showed in the benchmarks, the league average rate for fair bunts was just over 50%.  For the purpose of looking at season leaders and trailers, I've set a minimum of 20 bunt attempts, which leaves 70 bunters from last year.  The tables below show the fair bunt rates for the 10 leaders and trailers.

Since this metric only judges whether the bunt was in play or not, its best use is probably to determine which players would be good in sacrifice situations.  There are plenty of pitchers sprinkled throughout the list (including three in the top 10 and four in the bottom 10), and the pitcher's role is almost exclusively to sacrifice.

Who does the most damage?

But what about what happens once the ball is in play?  There are a number of possible ways to quantify this; Fangraphs has bunt average, which is a good way to show how productive non-sacrifice bunts were.  In this post, I will use hits over all fair bunts as opposed to non-sacrifices (detailed in the glossary).  Below are the 10 leaders for hit%, out%, and sac%, with 10 fair bunts as the minimum.
The sacrifice column is interesting because it is composed entirely of pitchers except for the leader, Red Sox outfielder Darnell McDonald.


The last thing I'd like to look at in this post is a way to tie in all of the facets of bunt attempts into one metric.  Using run values is typically the best way to do this.  For bunts in play, I'm using the following weights (with "0" representing a neutral outcome):

In the overall value, I'll also include failed bunt attempts.  The run values for these pitches are dependent on the count and are similar to the ones shown here.


There will be two sets of leaders and trailers for this metric, which for now I'll refer to as bunting runs - there's bunting runs as a counting stat, and there's bunting runs per 100 attempts.  I don't really like using 100 because it doesn't really have much meaning when it comes to bunting, but it's a nice, round number and is commonly used for rate stats.  According to my numbers, the league average bunt runs/100 in 2010 was -3.46 (-2.95 for bunts not in play and -0.51 for bunts in play), which would mean that overall, attempting to bunt leads to a below-average outcome.


I think it's fair to say that Gregor Blanco was the majors' best bunter in 2010.  As notable is Juan Pierre's number of bunting runs, which shows that lots of mediocre bunting might not be a good idea.


Hopefully, this post provided some answers about bunting; in addition, it certainly raises some more questions.  Next week, I will expand to data from 2008 and 2009 in order to look at larger sample sizes and year-to-year correlations.