This is the second contribution from Bill, and it might just be it's better than his last. Added this to the front page, where it belongs. -ed.

As a life-long Mets fan who has lived South Jersey since 2001, I have been (un)fortunate to observe the very different paths taken by my favorite team and my (newly) sworn enemy. Here are my observations of both teams based on their team data from 2001-2010.

The visualization charts each team's run differential and wins since 2001. The thicker the line, the more wins for a team that year. The Phillies by far were the more consistent team of the decade, with a positive run differential in nine out of ten years and an average RunDiff of +73. The performance of the Mets, on the other hand, was more volatile. The team started off the decade with four consecutive years of negative run differential, followed by four years of positive RunDiff, and ended with two subpar seasons. The team managed an average RunDIff during the decade of -1. Since the Mets first place finish in 2006, the Philies have averaged 91 wins and a RunDiff of +97, while the Mets have only averaged 85 wins and a RunDiff of +32. It's clear the two teams are moving in opposite directions. 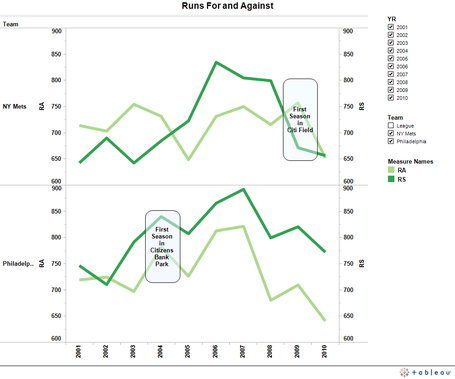 If we look at the relationship between payroll and wins the story becomes even more interesting. Over the past decade, the National League as a whole saw a neutral to negative correlation between payroll and victory--basically, higher payrolls did not generally lead to more wins. (Note: given the small n, this is directional but not necessarily significant). The Mets certainly followed this trend, spending an average of $114M per year and $1.45 per win. However, the Phillies managed a positive trend between payroll and wins, spending an average of $89M and only $1M per win. While the Mets were never quite sure what they were going to get for their money, the Phillies' performance held close to the trend line in just about every season. 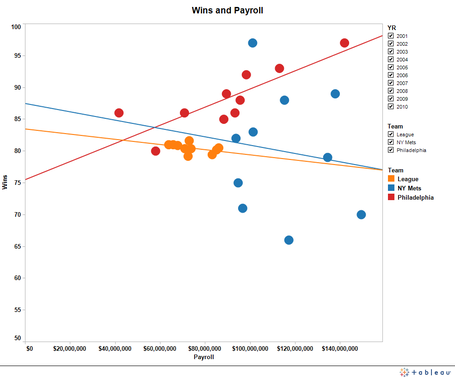 Bottom line: between injuries and bad signings, the Mets have gotten far less for their money than the Phillies, who have done a better job of cultivating young talent and signing productive free agents. The variance in player performance has been much less for the Phils than the Mets, particularly their young stars. And while the Phillies have had another solid off-season, signing Cliff Lee and further improving their pitching staff to counterbalance their declining offense and the loss of Jason Weth's production, the Mets must completely rebuild the organization from the farm system up. The strategy of signing expensive free-agents to long-term deals has not brought about more wins, and given that their pitching was one of the best of the decade last year the only way for them to improve their run differential is to improve the offense. Given the derth of young hitting talent in their farm system, this could take a while.