Benefit of the Doubt: Odd Patterns in Umpire Compensation

Share All sharing options for: Benefit of the Doubt: Odd Patterns in Umpire Compensation

In this installment of Benefit of the Doubt we take a look at the effect of the ball-strike count on the strike zone. This is not a new area or analysis; several sabermetricians before me have done top-notch work on the subject, including Dave Allen and John Walsh. Moreover, both Mr. Allen and I have successfully tested this effect statistically, albeit using slightly different models and methodologies.

Nonetheless, I've uncovered something that I don't believe has been discussed in the past. First, let's review: we know--both intuitively and empirically--that the strike zone changes in response to the count. Take a look at the following heat maps for empty and full counts. 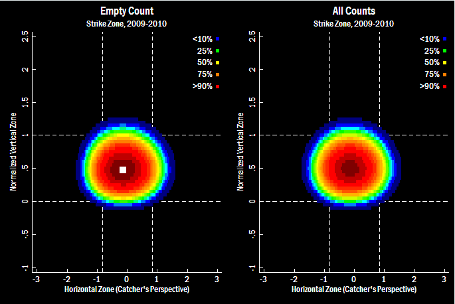 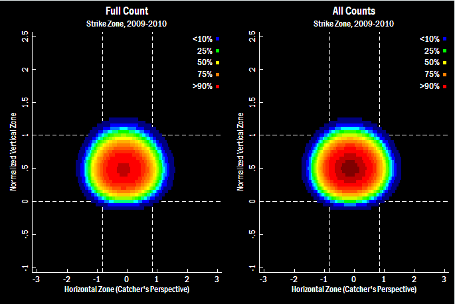 For the unfamiliar, the charts above indicate how likely a pitch is to be called a strike if thrown at a given location. The warmer the color, the more likely a called strike. The strike zone--theoretically the break even boundary between called strikes and balls--is roughly outlined in yellow.

As you can see, both the full count and empty count zones (left) differ from the generic zone (right). More specifically, we know that the zone tends to get smaller in pitcher's counts and larger in batter's counts. Observe: 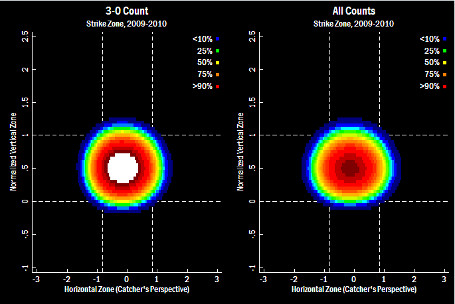 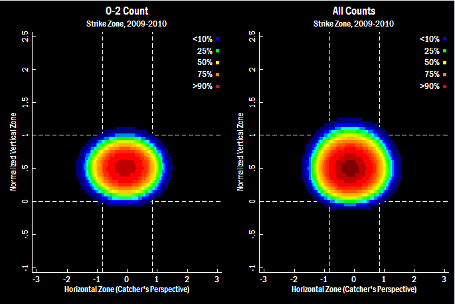 In the ultimate batter's (3-0) count, the zone is white-hot down the middle and significantly wider on the edges. Likewise, the zone for a pitcher's (0-2) count is noticeably smaller and generally cooler. This corresponds with the theory of the compassionate umpire, if I may steal Mr. Walsh's phrase.

So, we should see these results reflected in the Zone Advantage ratings, yes? Well, as it turns out, the answer is more like "yes, but..."

Over the last two seasons, the 0-2 and 3-0 counts were not the most extreme examples of bias. In fact, both the 0-1 and full counts have favored the batter more than the 0-2 count, and pitchers have done somewhat better with the 2-0 count than the 3-0 count.

This does not contradict Mr. Allen's finding that the strike zone is largest at 3-0 and smallest at 0-2. In fact, when it comes to the topology of the zones, our findings are consistent: the expected zone is in fact larger at 0-2 than at 0-1 and smaller at 3-0 than 2-0. 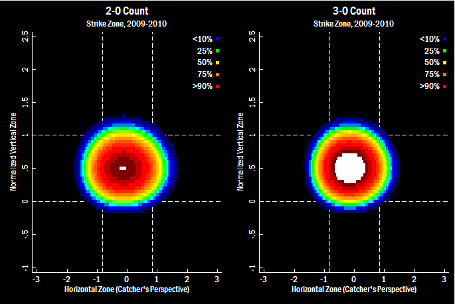 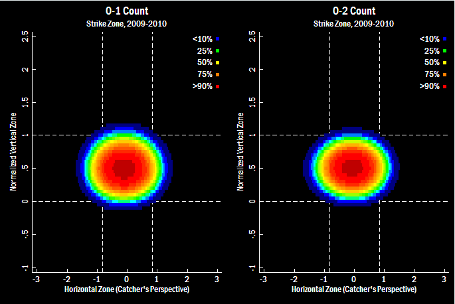 So what gives? Keep in mind that, as the count changes, the zone is not the only thing that changes with it. Perhaps more importantly, pitcher and batter behavior--and thus the distribution of called pitches--changes. Moreover, the distribution of pitches is at all times uneven and, at the micro level, random.

The takeaway: due to the intricacies of player behavior and random variance, the size of the expected strike zone does not always correspond to real-world bias. Both, however, are important in measuring how the umpire's call changes depending on the context of the pitch.

Previous episodes in the Benefit of the Doubt series