So, Joe Posnanski revealed his break-out pitcher for 2011 recently: the Brewers' Yovani Gallardo. Given that Poz picked Ubaldo Jimenez* for 2010 and Zack Greinke for 2009, could we be seeing Gallardo go from very good pitcher to Cy Young candidate (possibly even upstaging the team's newest acquisition - Greinke himself)?

* Jimenez wasn't really much better in '10 than he was in '09. His fantastic start this past season and somewhat overlooked previous season made the difference seem larger, I think.

There is one area where Gallardo is already elite, and that's in whiffing batters. He finished second to Tim Lincecum* in strike-out rate amongst NL starters in both 2009 (9.9 K/9) and 2010 (9.7 K/9).  While he also showed improved control in the latter season - dropping his walk rate from 4.6 BB/9 to 3.7 BB/9 - there's still some room for further improvement there, which I imagine is one of the necessary steps for a break-out 2011.

* Lincecum's fastball velocity has gone from ~94 mph to ~91 over the past three seasons. His rank in strike-out rate amongst all (qualified) major league starters: #1, #1, #1. Dude's ridiculous.

Does Gallardo possess the arsenal of an Ace?

I'm not a pitch f/x guru or visuals wizard like some of my BtB co-bloggers are, but here's a look at what Gallardo was working with in 2010 (data courtesy of Texas Leaguers): 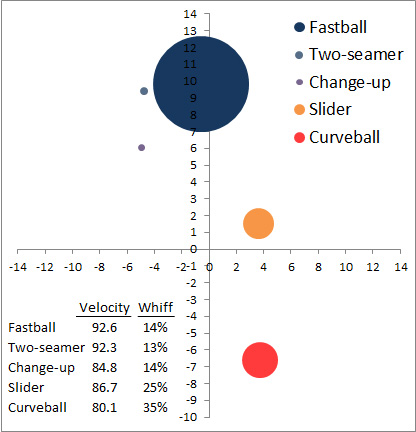 The location of the circle represents the pitches average "movement"/spin deflection. The size of the circle is proportional to usage (bigger=more). The table on the lower left has average velocity and whiff rate (swings and misses over swings) for each pitch.

Gallardo largely uses just three pitches: a fastball and a pair of breaking pitches. His heater appears to be only a pretty good. He threw it a tick harder than average, but missed bats with it a little less often than average. It rides a bit more than your standard four-seamer, and also has a fair bit more cutting action (or less tailing action, if you'd prefer). The slider is a relatively hard one, with more sweeping movement than average. Given that, it's a bit surprising that in both 2009 and 2010 his whiff rate on the pitch has been a fair bit below average (more in the 30-32% area). His curve, on the other hand, is a real swing-and-miss pitch. It's more of a 12-6 bender, but it comes in pretty hard and generates whiffs at an above average rate.

This repertoire - though obviously only seen through the lens of some basic pitch f/x work - doesn't exactly scream overpowering starting pitcher to me. How has Gallardo been able to post such high strike-out numbers then?

First off, he was a little better than average at getting to a two strike count - in part due to batters being willing to take a strike (perhaps owning to Gallardo's reputation as not having the best control). When he got batters to two strikes though, Gallardo was very, very good at punching them out. That's when he'd turn to his curve (32% of the time, and 35% of the time when there were less than three balls), and he was able to turn 48% of his X-2 counts into K's (the NL average was less than 40%).

Going forward, if batters begin to start going after early strikes a bit more often, it's possible that Gallardo won't find himself in quite as many two-strike counts - and it would then cut into his strike-out totals. Even if he was only average in that area though, his ability to send batters straight back to the dugout when given the chance would keep his strike-out rate quite high (at least in the 8.5-9 K/9 range). Such a change would also potentially have the side effect of decreasing the number of free passes Gallardo would give up, so there wouldn't necessarily be a drop in overall production.

Though he walked fewer batters in 2010 than in 2009, I'm not sure there's much more room for significant improvement. It seems like Gallardo started to use the fastball more in early in at bats - especially when behind in the count - and that helped him avoid those 3-0 and 3-1 situations where his less than excellent control put him in a poor position when it came to not giving up the base on balls. On 3-2 counts, Gallardo walked batters about as often as the average NL pitcher in 2010 (an improvement from the previous season), but struck batters out at a well above average rate (31% of PA vs. 24%). I think that there are some more marginal gains to be made in getting into more good counts and fewer bad counts, but I'd be a little surprised to see Gallardo's walk rate get to 3 per nine next year unless he just gets better at hitting his spots.

To the third leg of the FIP stool; as pitcher with a fairly neutral groundball to flyball rate, the expectation would be that Gallardo would post close to league average home run rates. He's (supposedly) given up a higher than average rate of line-drives in his career though, which combined with a slightly lower HR/FB rate was kept his home run rate lower at 0.8 HR/9.

If we expect most of Gallardo's strike-out rate to carry forward (say, 9.5 K/9); a slightly improved walk rate (3.5 BB/9); and a still slightly suppressed home run rate (0.9 HR/9) then he'd post a FIP around 3.50. That's not exactly a break-out performance, even if he manages to stay healthy enough to pitch 200+ innings for the first time in his career.

The problem is that with the K's already more or less at their max, Gallardo would need somewhat reinvent himself in other areas (much better control, many more groundballs) or get pretty lucky to take a major step forward in 2011. Good thing for Milwaukee that he's already really good.