Ground Balls and Pitch Speed: What should we expect to see from Brandon Webb if he returns to MLB this year?

Share All sharing options for: Ground Balls and Pitch Speed: What should we expect to see from Brandon Webb if he returns to MLB this year?

Brandon pitched for the first time competitively (in 17 months) in September and October in three instructional games. The first game, Webb threw 80% and was 78-80 mph. The second game Webb was closer to 90% and was 81-83, and the third game, Webb, still laying back a bit, was 81-85.  The reality is that Brandon showed good pitchability (he had strong movement on his signature sinker, plus plus change, and plus breaking ball).  What he also had was some rust on location.  Brandon's velocity is of very little concern to those that watch a lot of games.  His arm strength is indeed coming back, and honestly, he pitched at 87-90 all of 2008 (when he won 22 games) and that is only 2-5 mph off where he was in October.

One concept that is pretty easy for people to understand is that the more velocity a pitcher has on his pitches, if everything else is the same, the better off a pitcher's stuff is.  After all we're willing to love the guy who can throw in the high 90s right from the start, while the guy who throws low 90s/high 80s needs to win us over.  And if a guy can hit 105?  Well, it's a highlight. After all, it's incredibly fun to see a batter swinging and missing at a 100 MPH fastball!

But what people don't seem to understand as well is the effect of a pitch's velocity on the ability of that pitch to get ground balls.  You can see this in the quote at the top of this article.  Admittedly, the quote is from an agent who has an incentive to exaggerate his players' abilities.  But you can see the idea in the bolded part of the statement, which I've seen echoed by people discussing Webb this year:  Losing velocity doesn't matter as much to a ground ball pitcher (sinkerballer) as it does to a strikeout pitcher.  Is that true?

No.  It is Not True.  So what does that mean for Brendan Webb - how would a loss of a few miles per hour affect his amazing ability to get ground balls?  After the jump, I'll show how velocity affects a pitch's ability to gain ground balls and what we should expect from Brendan Webb if he returns to MLB this year. 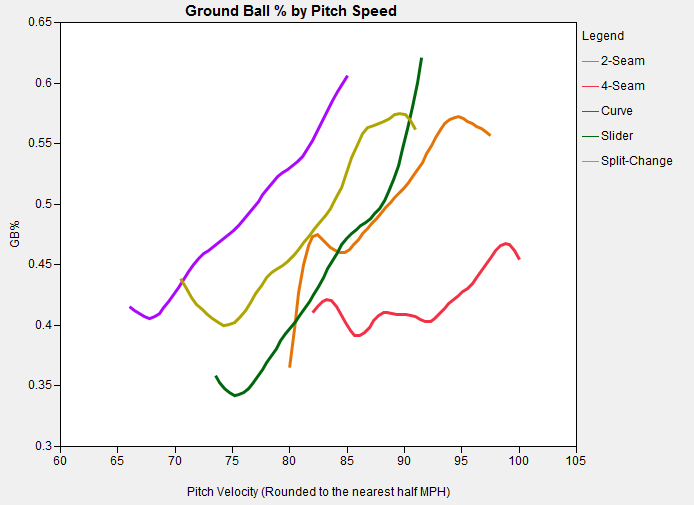 Figure 1: A graph showing the relationship between GB% and pitch velocity for 5 basic pitch types.  All Classifications are done using MLBAM Classifications.

Figure 1 shows how in general for every pitch type, the increase in pitch velocity results in an increase in the ability to get ground balls.  This relationship seems pretty clear for every pitch type except  for four-seam fastballs, where the relationship still seems somewhat clear.  Still this graph should be noted to not be a great representation of this effect of pitch velocity.*

*Figure 1 should be taken somewhat cautiously due to how MLBAM's pitch classifications work.  The distinctions between two-seam fastballs and between other pitches such as four-seam fastballs and change-ups are hard for the system's algorithms to work out.  The system does do a good job classifying curve balls and sliders and thus you can clearly see the relationship between GB% and pitch velocity for those pitches, whereas the other curves are more irregular.

So you can see there's clearly a relationship between speed and ground balls by pitch type, except for four-seam fastballs, though I suspect this is partially due to pitch classification problems (you can see this partially as removing half of the lower velocity fastballs from the sample size doubles the R Squared).

Now this type of analysis is of limited worth because one pitcher's two-seam fastball can be completely different from another pitcher's two-seamer.  After all, how do we know this analysis will stand if we have one pitch with a clear greater amount of movement than another of the "same type."  Well, taking a look at the relationship between speed and ground ball rates, holding acceleration in the z-plane (vertical movement) constant, we once again see this same positive relationship between pitch velocity and ground ball rates. (Take my word for it, it's too much to show every graph).

Well we're still not accounting for pitch location: what happens if we keep  that pitch constant? Well up to around the high part of the strike zone, the answer is yes: once again, we see that an increase in velocity results in an increase in the ground ball rate of a pitch.  The fact that areas higher in the zone and just plain high don't share the trend, but I would suspect that's because those pitches are hard to hit into the ground anyhow (the ground ball rates are tiny as well).

So our conclusion is simple:  It would seem that the faster a pitch, the better that pitch is at getting ground balls, with the possible exception of four-seam fastballs.  Thus a sinkerballer can't simply shrug off the loss of some velocity on his pitches....just like a strikeout pitcher, he'll find the loss of speed will reduce his effectiveness, but in the sinkerballer's case, it'll be because of a loss of ground balls.

What does this mean for Brandon Webb?

Remember, Webb's agent said that he might have lost 2-5 miles per hour.  How much would that affect Webb's ground ball rate?  Well, Webb had a 64% GB Rate (Yes that's insane).  Most of that came from his two-seam fastball (66% GB Rate), which he threw 68.7% of the time against LHBs and 73.4% of the time against RHBs.  The pitch had a vertical acceleration between -32.03 to -28.77 feet per second 50% of the time.  To understand what that number means: the pitch has a vertical spin deflection of +1.07, which means that it had 5 inches more sink than the typical two-seam fastball.

The pitch's location was basically throughout the strike zone...Webb didn't rely upon hitting the bottom part of the strike zone to get his ground balls, rather he seemed instead to be able to make sure that his pitch never really missed low or high (he did miss inside and outside, just not low or high too frequently). 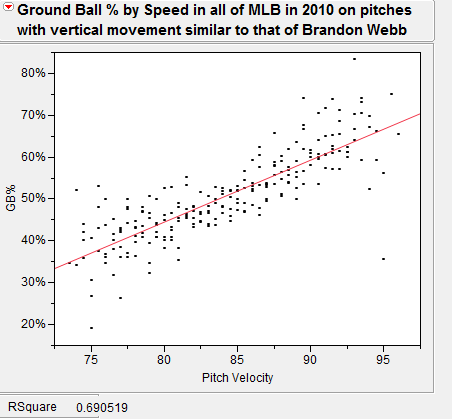 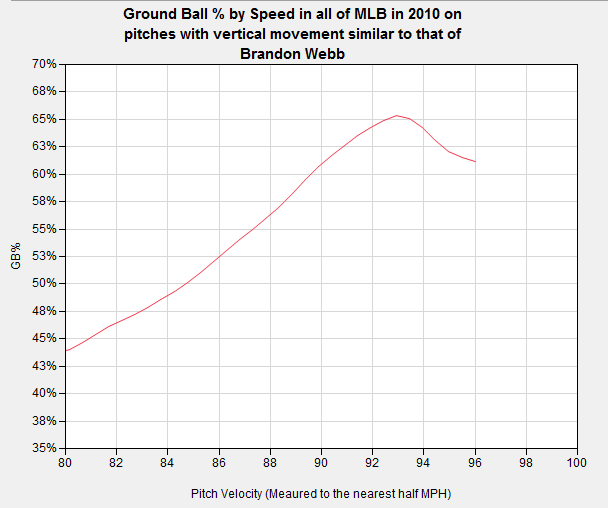 Figure 3:  Another graph showing the relationship between pitch velocity and ground ball rate of pitches in all of MLB in 2010 that have the vertical acceleration of a Brandon Webb Fastball.  This graph shows not the correlation but just a smoothed line of the data points.  The dip at the end is due to the one outlier visible in Figure 2.

These graphs show how velocity impacted the ground ball rate of pitches that sink similar to a Brandon Webb fastball in 2010.  Here, we can attempt to use them to try and guesstimate the effect of a drop in velocity on Webb's GB Rate:

Webb's fastball averaged 88.1 MPH in his last full season.  Using Figure 3, we can guesstimate that the average pitcher's pitch with similar movement would result in a ground ball rate of 56.5%.  This is lower than Webb's actual rate of 66%, but is still a pretty high ground ball rate for a fastball (In 2010, a GB Rate of 56.5% would be the 24th best GB Rate for two-seam fastballs out of 93 qualifying pitchers).

Now then, let's suppose the average pitcher loses 2MPH on such a fastball.  The Ground ball rate would thus drop all the way to 52.5% (I know it says 53% on the graph, but there's a rounding error and each mark on the y axis shows an increase of 2.5%), a drop  of 4%.  This rate would drop our hypothetical pitcher from having the #24 best sinker to the #41 (out of 93) best sinker, a drop from pretty good to barely above average.

Okay, but Webb's agent said the drop was 2-5MPH, so how about a 5MPH drop?  Well once again looking at figure 3, this would seem to drop the GB Rate of the pitch to 47.5%, so that now all of a sudden our hypothetical pitcher has lost a whole 9% off of his ground ball rate of his sinker.  This would make our hypothetical pitcher suddenly below average as he'd have the #63 (out of 93) best ground ball rate on his sinker.  Not good at all.

Now of course, Brandon Webb didn't have a 56.5% ground ball rate, he had a 66% GB Rate on the sinker (which would place the pitch at #4 out of 93 qualifying two-seamers at getting ground balls).  Well, totally guesstimating here (don't take this calculation too seriously), for our average pitcher a 2MPH decrease resulted in a 7.08% drop in GB Rate (percent drop, not actual drop) and for a 5MPH decrease the result was a 16.07% drop in GB Rate.  Applying these percentages to Webb's own GB rate of 66% and we find that a drop of 2-5MPH would result in a GB Rate between 61.33% and 55.39%.  61.33% is still really good (It would be #13 out of #93 last year) but would clearly represent a step back for Webb, while the 55.39% rate is a catastrophic drop that would signal the end of Webb's status perhaps as even a decent starter in the major leagues.

When talking about ground-ball pitchers, one shouldn't act as if velocity is unimportant.  Keeping all-else the same, an increase in velocity increases the ground ball rate of a pitch, and a decrease in velocity likewise results in a decrease.  One should not try to treat even a 2MPH lightly because a pitcher doesn't rely upon strikeouts to get out batters and a 5MPH should certainly not be treated as negligible.

Regarding Brandon Webb, the team that eventually signs him needs to be awfully careful and do their due diligence.  Webb has dominated based upon an amazing ground ball rate and an amazing change-up that resulted in decent strike-out rates, along with not-bad accuracy.  Even a small drop in velocity will reduce the effectiveness of Webb's best method of getting outs, and this is ignoring the fact that drops in velocity would also likely reduce the effectiveness of his pitches at getting swinging strikes.  A one-year contract is probably not too risky, but one should not have high hopes if the reports of a velocity decrease are proven true.