Zack Greinke has undoubtedly been the talk of the baseball world following Sunday's Royals/Brewers trade that sent Greinke to Milwaukee for four Brewers prospects.  Since 2008, Greinke has established himself as one of the best pitchers in the game; his 19.6 wins above replacement (Fangraphs' implementation) is fourth best in the majors over that time behind Roy Halladay, Cliff Lee, and Tim Lincecum.  Since Greinke is the "hot topic," I'll give a brief look to the pitches that Greinke throws and what results they got in 2010.

Greinke throws a four-seam fastball, a two-seam fastball, a hard slider, a changeup, and a few different types of curveballs (more on this later).  He fed hitters with a near-even mix of four-seamers and two-seamers last year, and threw all three of his off-speed pitches about 13% of the time.  The charts below show the spin deflection from the catchers' perspective for the five pitches and the velocity distribution for each pitch.  (click to enlarge) 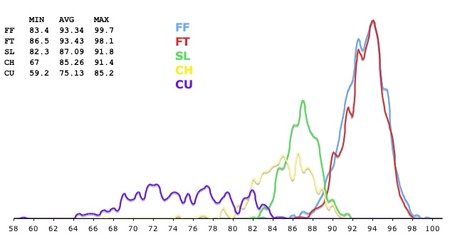 As the velocity distribution shows, Greinke covers a lot of different of speeds.  His fastball can reach the upper 90s, and he'll drop his curveball down to around 60.  He even threw a 67 mph eephus changeup this year in an at-bat against the Braves' Kris Medlen.  The curve, in particular, is very interesting --- as Harry Pavlidis showed us last year, the curve looks like three distinct pitches that have similar movement.  Splitting the curveballs by game into three different speed buckets, you get a "slow" curve at ~70 mph, a "regular" curve at ~75 mph, and a "fast" curve that borders on slider territory and averages ~80 mph:

I'm not sure if it's more effective to think about the curve as three distinct pitches or as one pitch that gets a lot of speed variation.  (Thoughts from those who get to watch Greinke more than I do: your thoughts would be appreciated.)  In the tables below are some pitch results for Greinke's pitches, with all the curves lumped together.

Zone rate - pitches in the strikezone divided by total pitches

RV/100 - linear weight run values per 100 pitches, a stat that John Walsh (among others) popularized in February 2008.  These values (kindly provided to me by Dan Brooks) do not perfectly reflect the 2010 run environment.

Judging from these numbers, it would look like his two best pitches are his slider and his four-seamer.  The two-seam fastball is thrown to contact and doesn't get enough ground balls to be an extremely effective pitch, and the change and curve don't look that special (though that is a sweet groundball/flyball ratio for the change).

The next chart shows Greinke's pitch selection in each count.  It's clear that the slider is his go-to pitch with two strikes.

Greinke had a good season last year, though it was nowhere as good as his 2009 - while he maintained his impeccable control, his ERA rose by two runs and his strikeout rate fell.  His whiff rate of .191 last year was unspectacular compared to his 2009 mark of .234 (which was aided greatly by his well-documented slider).  I'd expect his numbers to be better in 2011 with his move to the NL Central.

The data used in this post are courtesy of Joe Lefkowitz's site.