The 2011 Hall of Fame Ballot, Graphically

Share All sharing options for: The 2011 Hall of Fame Ballot, Graphically

As a primer/refresher, these graphs are depicting player seasons not chronologically, but sorted from best to worst according to rWAR (all data are from baseball-reference).  The "Hall of Fame Zone" spans from the average Hall of Fame player down to the 20th percentile.  There are hall of famers below this zone, but it serves as a good cutoff for future inductions--especially given the quality of this ballot.  This is not the be all and end all when judging a player for the Hall of Fame.  But it's a good place to start. 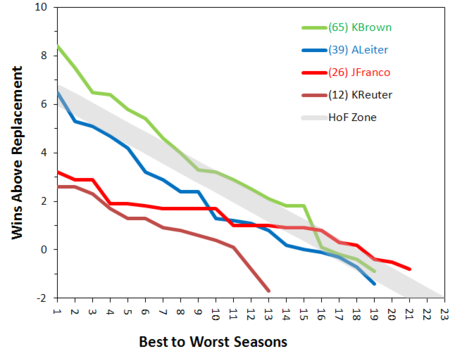 I was pleasantly surprised to see how well Kevin Brown's career comes out.  But at the same time, I'm not surprised.  The guy was amazing for a very long time.  From 1996-2001, he posted a 2.53 ERA in 1325 innings--that's the heart of the "steroid era", folks, with some of the highest run environments in history.  He had 15 productive seasons, almost all of which are at or above the 50% mark for hall of famers.  Seems like a clear Hall of Famer to me--it's really not even close.    Vote for him.

Al Leiter was also a pleasant surprise.  He probably just misses the mark for me, but it was closer than I expected.  He's actually very similar to another pitcher on this year's ballot, Jack Morris (see below)--might even look a bit better, especially at his peak.  John Franco headlined perhaps the second generation of pure closers.  I loved him as a Red, and I love the screwball.  But he falls well short.  And Kirk Reuter should be congratulated on a fine little career, but he's not close and won't get a vote.

Pitchers Returning on the Ballot 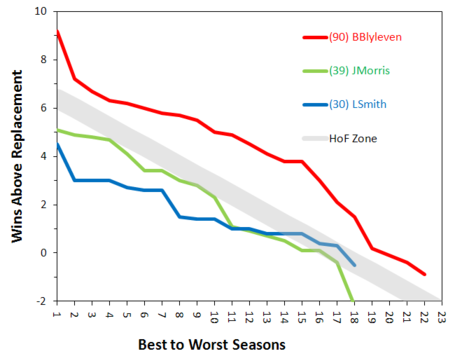 Jack Morris continues to get a lot of print, and I won't claim people are idiots for thinking that he should be in.  But he misses the mark for me.  Lee Smith had a terrific career as a closer, but again it just wasn't enough.

Here are the top candidates once again (Blyleven, Brown, Morris, Leiter), all on the same graph: 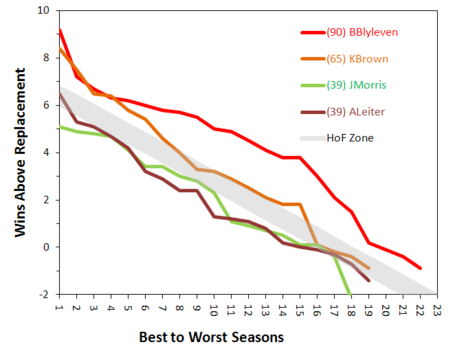 Jack Morris = Al Leiter?  Yeah, you can make that case.

There are more hitters than pitchers as usual, so we'll start with the most recent (arranged by Bill James' HOF monitor at B-Ref) and then work back through players on more distant ballots. 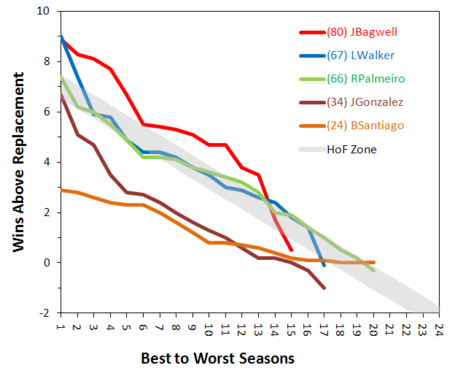 Jeff Bagwell leads the new class of hitters, and he has a very strong case--perhaps the strongest on the ballot aside from Blyleven.  His career wasn't as long as some, but he still played 15 years, and was a better than an average Hall of Famer in almost every single year.  Rookie of the Year, MVP, 0.408 career OBP, 0.540 career SLG while playing in the Astrodome....the list goes on and on.

Also with strong cases, at least by the numbers, are Larry Walker and Rafael Palmeiro.  Walker had the better peak, but often battled injuries throughout his career and hovered somewhere near the lower-middle region of the Hall of Fame Zone throughout most of the rest of his career.  The primary knock against him is that he played for many years at Coors, but these data account for that run environment.  Given his magnificent peak (his MVP year was a 9 WAR season!), and the fact that he was a plus fielder at his position (Total Zone likely underrates plus fielders), I think it's appropriate to give him the nod.

Palmeiro, on the other hand, had a shallower peak, but had superior (enhanced?) longevity.  His numbers probably hall of fame worthy.  But it's close, especially with so many other strong candidates on the ballot.  And then there's the PED issue, which might be a tiebreaker with me.  I'm on the fence about him.  It will be interesting to see if he gets the requisite 5% to stay on the ballot moving forward.  I'd guess that he doesn't, despite the 569 homers.

Juan Gonzalez never really materialized like we thought he might, and probably was overrated because of his home run totals and relatively low OBP.  Benny Santiago was a fun catcher with a fine career.  He was the first guy I personally remember seeing throw guys out from his knees, and I remember being thrilled when he signed with the Reds for a year.  But he's also a no. 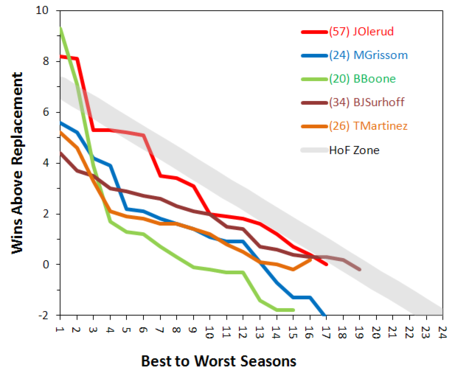 John Olerud was stronger than I remember him being: .398 career OBP, superb contact skills, nice power, great glove.  And my goodness he had a couple phenomenal years.  I also love that he wore a helmet in the field, as I think all infielders probably should.  But he probably just misses with me, as the rest of his career is more Hall of Very Good.  Also interesting is Bret Boone, who has the distinction as being the first major league ballplayer I ever personally met.  Boone had a 9 WAR season, a 7 WAR season, and a 4 WAR season.  But otherwise was never above 2 WAR.  Total Zone also thinks he was overrated defensively, but I'd be interested to see what WOWY or nFRAA thinks about him.  Probably regardless, he's a no.  As are Marquis Grissom, Tino Martinez, and B.J. Surhoff.  Not shown are Carlos Baerga, Charles Johnson, Bobby Higginson, Raul Mondesi, and Lenny Harris, but kudos to them for being around long enough to make the ballot. 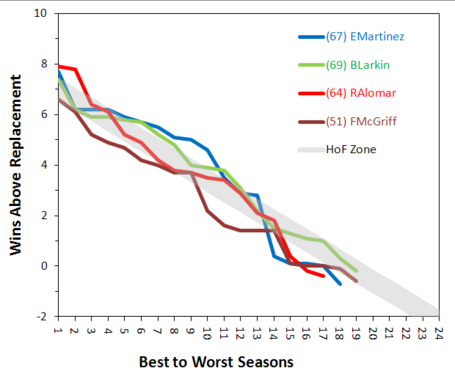 Four players return who were new on last year's ballot.  Roberto Alomar got the most votes of the group, and he has a decent case--looks very similar to Larry Walker's career line as I see it.  But to my eye, the stronger cases here are from Barry Larkin and Edgar Martinez.  Larkin has always been my favorite, and I've written a fair bit about his candidacy.  I'm totally biased, but he deserves it.  It's admittedly hard to know what to do with the DH--I've yet to see a solution that seems well-founded in the data--but I think Edgar was impressive enough to get in with his bat alone.  I'd vote for all three if I had the chance.

Fred McGriff is the one returning player from last year's class who I think just misses.  While they were clearly very different hitters, he's sort of similar to Olerud, with a bit better consistency but a much poorer peak. He was a splendid player for a long time, but he's not quite a hall of famer to me.

Hitters Returning from Earlier Ballots (I) 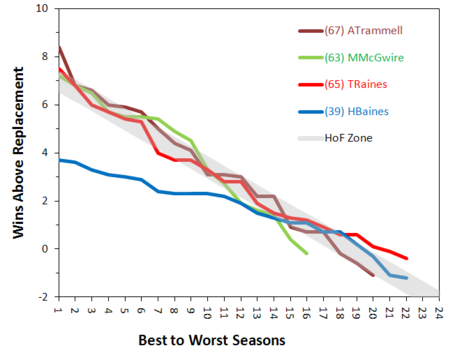 Alan Trammell is close to the same player as Barry Larkin, and both should get in.  Mark McGwire was good enough for about 10 years, but fell off a little bit quickly.  I'd probably vote for him, though.  If it wasn't for the PED thing, I doubt I'd have any hesitation. I'm sort of moderate about that issue.  I care, but I also think there's a huge pool of players who used and haven't been caught, and they probably include some supposedly clean players elsewhere in this post.

I said this last year, but Tim Raines looks a bit underwhelming by this approach.  I know a lot of folks that I respect argue adamantly for him, but he's a bit borderline in my eyes compared to the rest of the competition. His line looks a lot like Rafael Palmeiro's.  I think he deserves it, and I'd vote for him...but he's pretty far down my ballot.

Harold Baines is a no, despite excellent consistency in value for a long, long time. 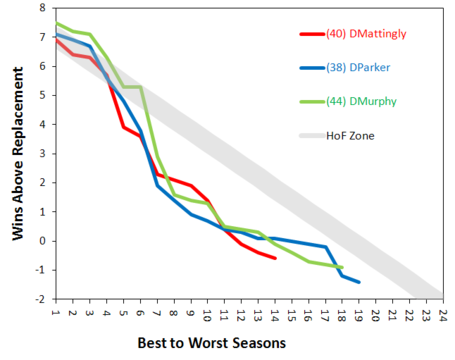 I love that all three of the remaining guys--those on their 11th or greater ballot--had similar career trajectories.  Excellent, hall-of-fame caliber peaks.  But the rest of the career just wasn't in that same territory.  Dale Murphy's the closest of the bunch, and last year I said I'd vote for him.  But this time around, I think the answer is no from me for all of these guys.   I love hall of famers with outstanding peaks...but to me the magic number is somewhere around 10 hall of fame-caliber seasons, and these guys didn't put up that many.  This will be Dave Parker's final year on the ballot, regardless of whether or not he is voted in.

Finally, here's a graph showing some of the more interesting comparisons on the ballot among the borderline players: 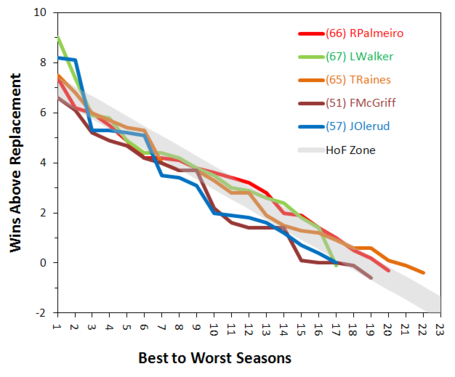 All of these guys are pretty close, which makes the graph a jumbled mess. But if you stare at it long enough, there are essentially two groupings.  On one hand, there is Fred McGriff and John Olerud.  On the other, there is Palmeiro, Raines, and Walker.

My Hall of Fame Ballot

So, based on all of this, here is what my ballot would be (if I had one), in a loose order.

Goodness, that's a lot of players.  But every single one of them is in the Hall of Merit, so I'm not alone here.  I hope we get a big class going into the Hall this year, as I'm running out of room on this thing...