There's a 30% chance your starter will hit the DL next year. Or Worse.

Share All sharing options for: There's a 30% chance your starter will hit the DL next year. Or Worse. 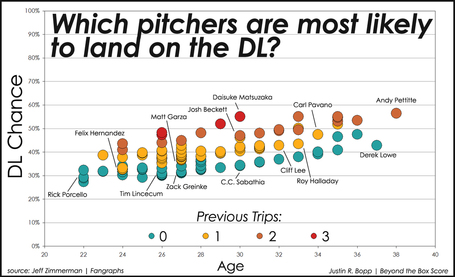 If you haven't already, check out the great exploratory work that our own Jeff Zimmerman is doing with DL projections for pitchers. Part 1 | Part 2

1. I realize that a chance is a chance and probability is a funny thing, but THIRTY PERCENT? But if you put it that at least one of your five starters will go to the DL at least once per season, that doesn't sound that ridiculous.

2. Unless you just assembled the greatest pitching rotation ever to lay foot on this lowly plane, of course. You KNOW Oswalt is 50/50 even without looking at this. But looking closer, Halladay is sitting around 44%, Lee is at 43%, and Blanton is at 40%. Hamels is least likely, at 31% (just above Greinke in the graph).

3. Don't shoot the messenger, but I can see a study like this being used to better target pitch counts for various age and DL-stint ranges.

5. Derek Lowe has never been to the DL, and Andy Pettite only twice. Can you think of anyone younger than 30 that might make it that far while having so few DL stints?