Benefit of the Doubt: How Pitch Speed and Movement Affect the Zone

Share All sharing options for: Benefit of the Doubt: How Pitch Speed and Movement Affect the Zone

As noted in previous episodes of Benefit of the Doubt, the strike zone as called is significantly modified by the behavior of the pitch and the context in which it is thrown. Today we'll look at the characteristics of pitch classification and its components: velocity and break. 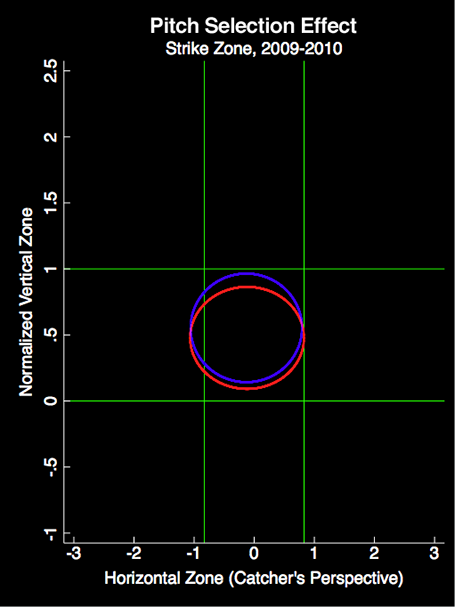 While the off-speed zone is clearly larger than the fastball zone, it is also higher. This is important, as only 25% of pitches thrown in the legal zone arrive in the top third. So while off-speed pitches are gaining more favor in the top third of the zone, they lose favor in the bottom third (which sees over 50% more pitches). Moreover, off-speed pitches left high in the zone are far more likely to make contact or elicit a swing, and thus have no impact on real-world zone advantage.

Below we see the zone advantage numbers for off-speed vs. fastball pitches, as well as pitch classification divided into three velocity categories: slow (under 85.7 mph), medium (85.7-90.8 mph) and fast (over 90.8 mph).

Movement—in both absolute and regular terms—is also significant, albeit harder to discern. To demonstrate this effect, I split horizontal and directional movement values into three categories and calculated the following zone advantages:

And when we plot these variables against each other, we see some obvious trends:

For best results in the strike zone, throw pitches with weak horizontal break and strong upward break—not that the zone itself should be the pitcher's primary concern.

That's all for this week. As always, feel free to submit requests if you'd like me to investigate something specific.

Previous episodes in the Benefit of the Doubt series