Share All sharing options for: Salaries, Aging, and Hot Stove Economics (OH MY!) 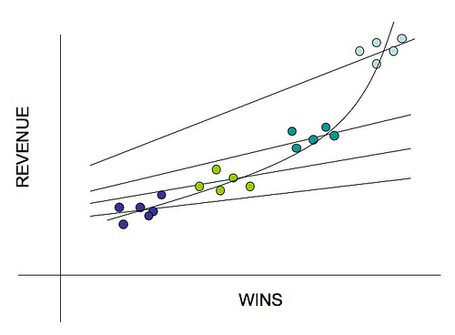 Last week, I posted the most obvious objections I had with JC Bradbury's Hot Stove Economics and his take on the Werth deal. Within the comments section, Sky Kalkman explored the various ways one might arrive at a better analysis, complete with both simple and effective charts showing his thoughts (pictured).

But now Phil Burnbaum throws the whole book at the issue:

JC came up with a model that suggested that every team receives the same revenue for their Nth win, regardless of the size of the market. For instance, if the Atlanta Braves make $X million more when they win 83 games than when they win 82, then the New York Yankees will also value their 83rd win at $X million.

As it turns out, the assumptions that JC's method makes are very different from the assumptions sabermetrics makes. And the direction of the difference is exactly opposite to the difference in the single-season curves shown in the graph. That means that when you look the numbers for a long-term deal, the two methods aren't off by nearly as much as they would be for a one-year deal.

So, my view on JC's methodology is that the reason his method gives reasonable values is mostly coincidence -- his positive errors cancel out his negative errors. Of course, JC would say the same thing for the sabermetric method, but in reverse. He'd say it's *us* whose logic doesn't work, and it's *our* errors that, coincidentally, cancel each other out.

So, how to resolve which version is correct?

This is a high quality read that hits on all the important differences in analysis, and hits some nice notes in both Player Aging and Salary Inflation. We're not at the end of this conversation, but we're certainly making progress.

Credit to Tango for finding this.