Share All sharing options for: Visualizing Projected Payroll and Production

On Friday, Justin issued a challenge to come up with a SaberGraphic showing team contracts & projected WAR. Today, I have an early concept.

Last night I was kind of thrown for a loop by the great work by jmaciel (in the comments of the thread linked above). But since mine was a more simple approach, I figured I'd put it out there for feedback.

The data isn't particularly real... I started with 2011's Fangraphs Fan projection and just kinda faked it beyond that. With some feedback, we could evolve this into something more real. I also only included a few players for starters, just to give the idea. Also, Adrian Gonzalez hasn't signed yet, so I'm using an estimate. 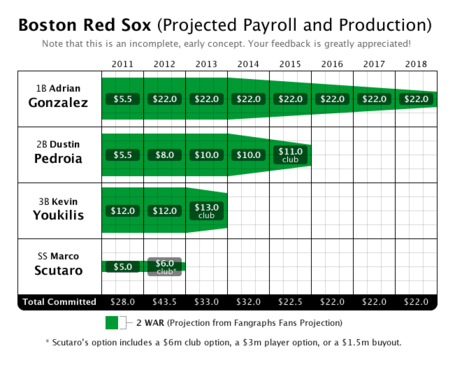 The main goal is that I wanted to get one player on each line. The height of the green bar is projected WAR (each "box" is 2 WAR, so Gonzalez, Pedroia, and Youkilis all happen to be in the 6.0 to 6.5 projected fWAR range). I thought about trying to use color to communicate salary, but haven't come up with anything I liked (particularly because it can change drastically from year-to-year, like Gonzalez).

The "Total Committed" column includes guaranteed contracts and any option buyouts. Should there be a max/min that includes exercised options?