Share All sharing options for: Revisiting the 1894 Temple Cup 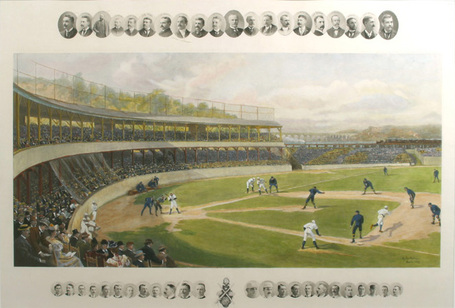 Last week, Keith Olbermann posted six pictures from the 1894 Temple Cup series between the first place Baltimore Orioles and the second place New York Giants. As someone that tries to soak up as much information on 19th century baseball, this was quite the read. The way the game has changed -- and I don't mean just on the field in terms of rules or rosters -- with season ticket holders being allowed to tie their horses up in center field to the wonderful, glorious mustaches really drives home just how far removed we are from that era. A game in the '94 Temple Cup was delayed in the middle because a horse broke free and trotted around the field. Now, we get riled up over some insects.

The Temple Cup was founded by then Pittsburgh Pirates president William Temple and was a 30-inch tall silver trophy. Since this came to fruition after the National League's competitor, the American Association folded, the format just pitted the second place team against the best team from the regular season.

To say that is an absurd notion would be putting it mildly. After playing 130+ games in a season, asserting your dominance of the league and you then must play a team for the league championship that you already beat? It just doesn't jibe with me.

But I'm not here to protest the format of a series that took place 116 years ago which saw the second place team conquer the first place team in three of the four series played.

Lets focus on the 1894 series specifically, as that spawned an investigation by the Baseball Researcher blog - one of my favorite baseball blogs online - that found what could be construed as PED use back then. How much were the Orioles favored in that series?

If we use the Pythagorean records on Baseball-Reference for both clubs, we get a Pythagorean win percentage of 0.664 for Baltimore and 0.576 for New York. If we apply the Log5 formula, we'd expect Baltimore to beat New York 59.3% of the time on a neutral field. Kick in 5% for home-field and you're looking at 64.3% of the time, in Baltimore, the Orioles should beat New York. But that's why they play the games.

The Giants swept the league's best team and took home the Temple Cup - and the chance to take home 65% of the money made on the series, though they agreed to split it 50/50 with the Orioles regardless.

Because the Temple Cup was won by the second place team three of the four years it was played, it seemed to undermine the regular season. The other biggest thing to torpedo the Temple Cup was just how little even the teams participating in it respected whoever won. Consider the cover of the Game Four scorecard from the 1895 series between the (again) first place Orioles and the second place Cleveland Spiders (per Keith Olbermann, again). The Orioles won the regular season title for the second straight year and made it abundantly clear on the scorecard, declaring "Champions: 1894-‘95" despite the fact that they would lose both Temple Cup series in those years, winning just a single game.