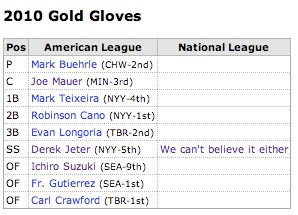 I try not to swear much, but this is deserving of an unfavorable word. @StatMagician

With every Derek Jeter win, the Fielding Grammy's status as a meaningful award becomes even more of a joke @jay_jaffe

Say what you want about the Gold Glove voting, but I think it is a wonderful farewell tribute to Joe Morgan. @devil_fingers

For the record (since I didn't mention this in the blog), my Gold Glove choice is Alexei Ramirez, with due respect to Pennington and Andrus. @robneyer

The only conclusion I can draw from Jeter winning another Gold Glove is that it is too hard to watch a game when you're also coaching in it. @keithlaw

The problem with separate Gold Gloves for the OF positions is that the responsibilities of each position are so similar. @Toirtap

@cwyers It's really hard to fathom that a shortstop could make an extra play over and above the average shortstop every 2.7 games, yikes. @Sky_Kalkman