A Timeline of the Best Players Ever: Now with Pitchers

Share All sharing options for: A Timeline of the Best Players Ever: Now with Pitchers

Last week, I posted a visual timeline of the best position players in the history of the game. Wins Above MVP Level (WAM) is the metric I used. I must say, I was quite proud of that graph. It was pretty… there were no blatant surprises in the data… the timeline couldn't have covered the history of Major League Baseball any better. It was fun.

Of course, as anticipated, in the comments the brilliant and surprisingly attractive readership asked to see what the pitchers would look like. I said "Ah ha! That comes next week!" So, before I turn this post into 2,000 words (meaning a picture, plus 1,000 actual words... get it?), let's show the pretty picture.

The original graph featured 20 players. Seven pitchers had more career WAM than the 20th-ranked position player. Instead of producing a new graph with 27 players on it, I added the next three players in WAM to make a nice round 30 (two hitters—Eddie Mathews and Wade Boggs—and an eighth pitcher). Here's the new graph with everyone shown together: 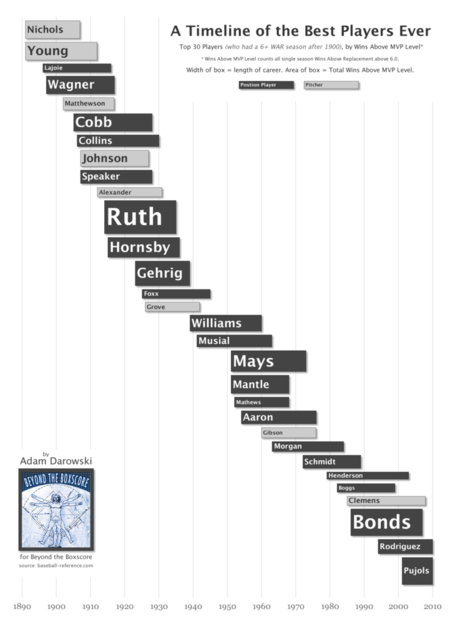 Click to make it bigger or read on for an explanation of the troubles I had with pitchers.

Perhaps you're saying "That's swell, but I wish I could see what the graph would look like with just the pitchers." I've got you covered: 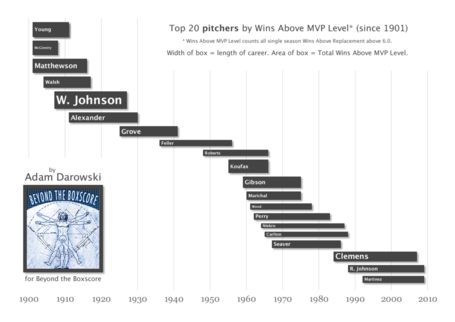 A few notes of… note: 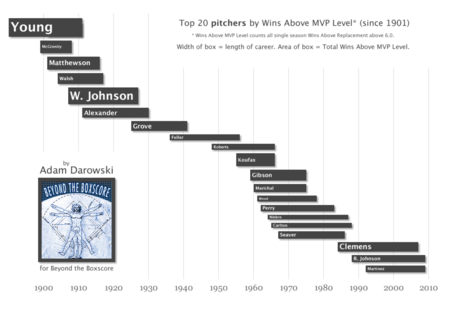 There's the Cy Young they named an award after!

The astute reader will notice that Kid Nichols appears in the very first graph, but not the others. That is because the vast majority of his value came in the 19th century. However, he's a bit "more modern" than guys like Radbourne. In this old post about career Pitching WAM leaders, I counted just pitchers who had at least one 6+ WAR season after 1900. So, I used the same rules here.

So, let's talk about the pitching graph a little:

I don't know about you, but I really like these timelines. They are pretty flexible, too… You could use WAR or WAM. You could do best hitters, best pitchers, a certain position, a certain franchise... really anything. I find it handy for Hall of Fame discussions, where you can see if a certain player was better than everyone else at the time he played. In this graph showing catchers, I've got a feeling that five of the catchers I think are deserving of Hall of Fame consideration are hurt because their careers all overlapped. Wally Schang, on the other hand, looks like he was the best active catcher for a short time and rarely any worse than second.

So, what would you like to see? We've got the easy one—best players ever!—out of the way. I'm curious to see what else we can come up with.