As the Rangers headed into the World Series, I posted a graphic showing just how amazing Cliff Lee's strikeouts per walk were through the first two rounds of the playoffs. At the time, his strikeouts already ranked tenth all time for a single postseason, but his walk total was far less than anyone in the top five.

Fast forward to the World Series. It didn't go quite as planned for Lee and the Rangers. But, as The Ancient Mariner pointed out on these very pages, Lee added thirteen strikeouts and just a single walk. Here's an updated graphic, showing where he now places in history (I've also added Commissioner's Trophies to those pitchers who won it all): 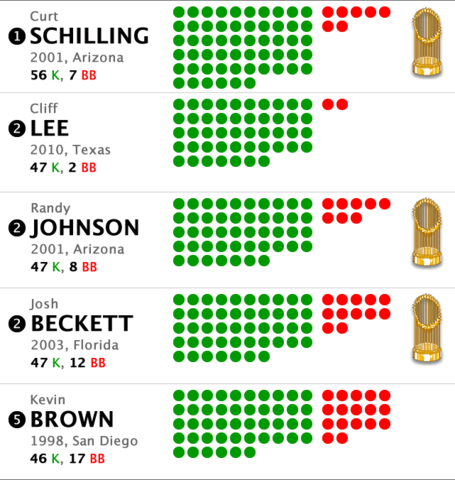 As you can see, Lee's final tally of 47 strikeouts put him in a three-way tie for second place. But not only did he have far fewer walks than the pitchers he is tied with (Randy Johnson and Jose Beckett), but his K/BB rate is also far superior to first place Curt Shilling's (23.5 to 8.0). Simply amazing.