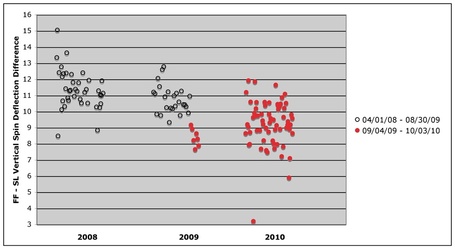 Throughout Joba Chamberlain's major league career, his signature pitch has been his slider.  When he burst on the scene in 2007, it was virtually untouchable.  In 2008, it was an elite pitch again.

However, over the past two years, the pitch has appeared (according to my eyes, watching the games on television) to lose something - it just doesn't seem like he's fooling batters like he used to.  I did some PITCHf/x-digging on the slider, and I noticed an evolution in terms of the pitch's plate location, movement, and velocity. While by objective measures it is still a well above-average pitch, it has become increasingly easier to hit over the past three seasons.

First, though, I would like to examine the three years of Chamberlain's slider with a few metrics that tell us different things.  The first and, in my opinion, most important one is whiff rate.  Whiff rate, calculated by dividing swinging strikes by total swings, is good to look at for a pitch like Chamberlain's slider because he uses it in strikeout situations for a swing-and-miss.

Chase rate is also very telling as it shows the percentage of pitches out of the strikezone that batters swung at, and getting batters to swing out of the zone (and miss) is the goal of Chamberlain's slider.  The third number I'm presenting in the table below is zone rate, which is simply the percentage of pitches that were in the strikezone.  For the slider, it's better for it to be out of the strikezone, but only if it generates swings out of batters.  So, I think it's good to look at all three statistics together.

While the chase rate has only declined a bit, the whiff and zone rates tell us that something's going on.  The whiff rate is still very good, but it is no longer exceptional like it was in 2008.  The pitch has found the zone a lot more over the past two years than it did in 2008, which is not a good sign.  What's causing the declining whiff rate?  The following distribution shows the normalized plate locations of Chamberlain's slider from 2008, 2009, and 2010.  The lines have been (somewhat) smoothed to better accentuate the trends. 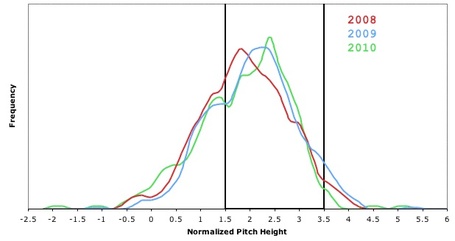 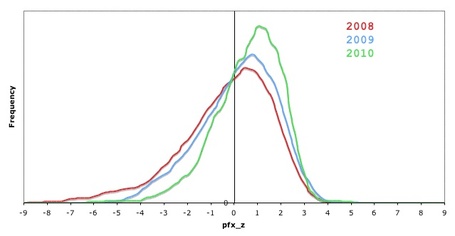 This distribution also peaks higher each year, which means that Chamberlain has lost "drop" on his slider since 2008.  It's important to note, however, that PITCHf/x camera calibrations different from park to park and from game to game, so it's impossible to put utmost confidence into raw readings - though the samples are probably significant enough over a whole season, which is what we're dealing with here.

I also looked at the break of the slider on a game level in order to try to get more information about when his slider started breaking less.  Because of the park effects I mentioned, I chose to display the break of the slider in comparison to his average four-seam fastball break for that game (you could run into trouble if the movement of his fastball had changed, but it appears to move similarly to how it did in 2008).  The chart displays available data from all regular season games since April 1st, 2008.

I identified a point where the slider appeared to begin losing its break, and I have separated the games before and after this into two clusters; it looks like something begins to change on September 4th, 2009 against the Blue Jays.  This was the second game of the "short start" experiment, in which the Yankees kept Chamberlain to a low pitch count in his starts in order to cap his innings.  (If you were wondering, that crazy outlier at the bottom is a May 3rd, 2010 game against the Orioles at Yankee Stadium in which the calibration was really odd.)  The trend continued in 2010, though the slider wasn't consistently as "short" as it was in September of '09.

How about velocity?  The distribution below would indicate that Chamberlain was throwing his slider at an entirely different speed in 2010 than he was previously: 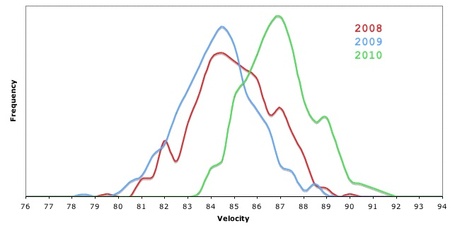 And by individual games? 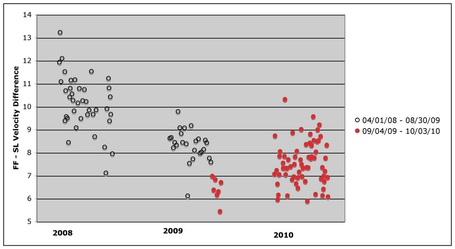 The slider gradually gained speed relative to the fastball throughout 2008 and 2009 and leveled on the September 4th game.  Just to get some more confirmation on the break and velocity of the slider, I've plotted pfx_z difference versus velocity difference by game, and the correlation seems significant: 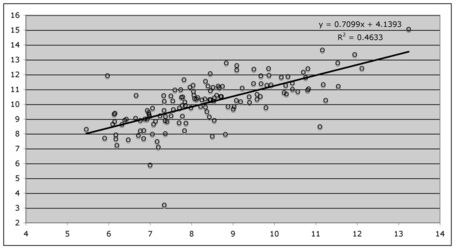 We can only speculate as to what the cause may have been - did he start "overthrowing" in September of '09 because he only had a few innings to pitch?  Then why would he continue overthrowing in the bullpen in 2010 when he wasn't in 2008?  Is it a mechanical glitch?  Is a physical problem causing him to lose command of his slider?  Clearly, I'm filled with more questions than answers on this front.  (You can help me become even more filled with questions in the comments section.)

I'd like to examine one more thing in this post.  In the first paragraph, I mentioned that Chamberlain's slider is still a quality pitch by objective measures; my favorite way to gauge overall effectiveness of a pitch is by using run values.  In addition to standard linear weights (similar to the values on Fangraphs), I also like to look at defense-independent weights, with league-average batted-ball values substituted for actual events.  As you can see, the slider has been effective by both measures (lower numbers are better for pitchers):

So, just a few concluding thoughts.  My suspicions (which I first detailed twice after the 2009 season) were correct, on some level.  The slider has both lost break and gained velocity, and the change has been particularly noticeable since September 2009.  There was a higher percentage of hanging sliders in 2009 and 2010 than there was in 2008.  The difference may appear slight, but as the saying goes, baseball is a game of inches.  All in all, while the slider may not be filthy as it was in the old days, it's still pretty great.

The data used in this post are courtesy of Joe Lefkowitz's tool.