Share All sharing options for: GIDP: The Underrated Production Killer

Earlier in the week, I wrote a post about how grounding into double plays erased 16.5% of Jim Rice's career offensive value. Of course, Rice isn't the only player I looked into, but the story really evolved to go into Rice further. Today, I'll share a few graphs of some other players of interest.

One player who was similar to Rice is Joe Torre. Torre actually was worth more offensively than Rice (300 runs above average to 279) and his double plays were just a tad less damaging (-43 runs compared with Rice's -45). As a result, the double plays cost him 14.3% of his career value, by far the highest total of any player with 300+ batting runs above average (Rocky Colavito was second at 8.5%). 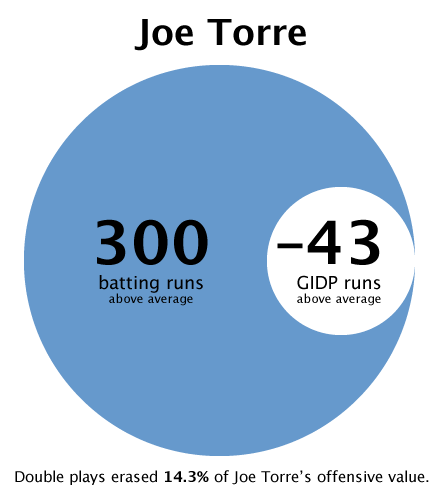 Among the players with the worst GIDP runs in history, George Scott also stood out to me because he had far fewer batting runs than Rice and Torre. As a result, 36.4% of his offense was erased. 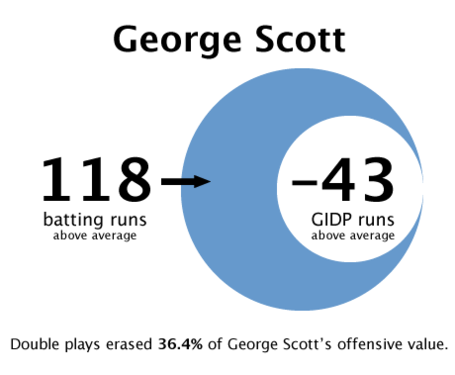 The highest active player (though he did announce he's now retired) is Mike Lowell. 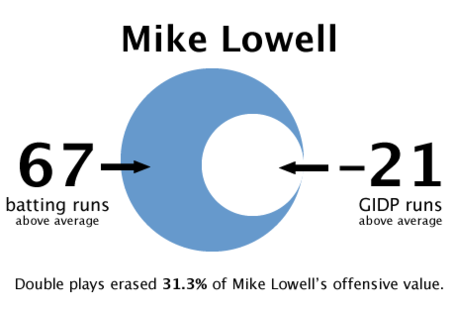 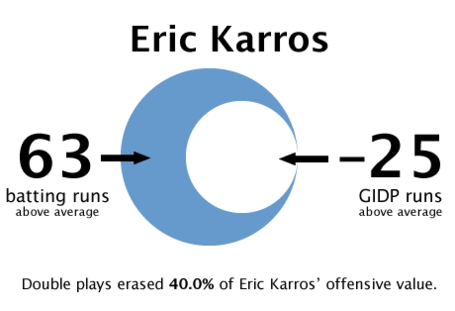 Lastly, this one was even tough to visualize in the same manner as the others. Brooks Robinson, of course, is a Hall of Famer with his glove. But he still collected 2848 hits and 268 home runs, which would make you think he was a pretty darn good offensive player. The problem is, it took him forever to do this, and he didn't have much plate discipline while doing it either. It all adds up to a marginally above average offensive player, according to both batting runs (+20) and OPS+ (104).

Sadly, all of it (and then some!) is wiped away by double plays. The GIDP knocks Brooks Robinson into a slightly below average offensive performer. 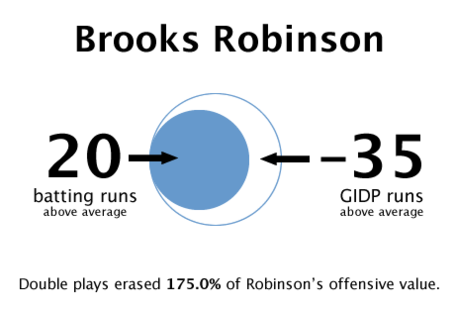 Here's the table that I used (from Rally's WAR database, then hand-updating the active players from Baseball-Reference). I used players with -20 GIDP runs or worse, then sorted by percentage of offensive value erased.