Benefit of the Doubt: Pitchers Who Were Squeezed

Share All sharing options for: Benefit of the Doubt: Pitchers Who Were Squeezed

In my last two posts, I profiled the starters and relievers who earn the benefit of the doubt in the strike zone. On the other side of the spectrum we find the pitchers who weren't so fortunate. Let's take a look at these unfortunate souls and some other pitchers' zones (by popular demand).

Over the last two seasons, Brandon League was squeezed more than any other pitcher (minimum 500 called pitches). See the chart below (the fainter ellipse represents the standard strike zone): 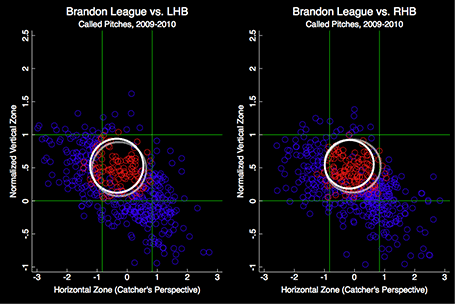 The competent Mariners and Blue Jays reliever was charged an extra 7.7 balls for every 100 called. Note: while in my first two posts I focused only on pitchers with a zone advantage of at least one standard deviation, it turns out that the long tail is longer on the fortunate end.

As for southpaws, Jarrod Washburn—who hasn't pitched since 2009—brought up the rear in terms of zone advantage. Washburn lost nearly 6 balls for every 100 pitches called during his 2009 season. 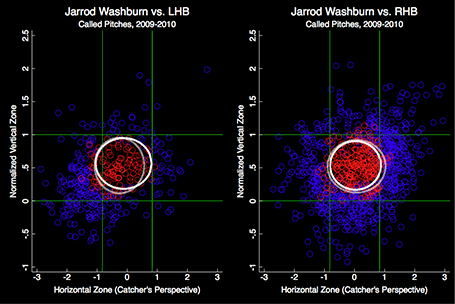 Just like League, the erstwhile M's and Tigers starter suffered against right-handed opponents more than lefties. On the other hand, Mets knuckleballer R.A. Dickey faced the squeeze against left-handed batters. 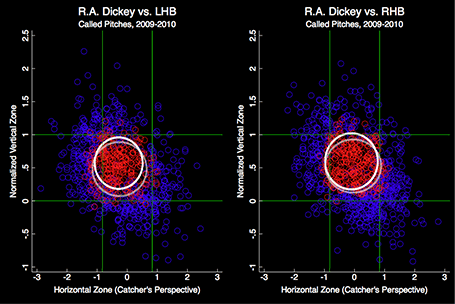 Just as it is for those pitchers who succeed at expanding the zone, the explanation for these pitchers' lack of success lies in the pitch level of analysis. Certain types of pitches in certain contexts garner additional consideration from the home plate official. Reposted from last week's article:

Finally, last week a few commenters asked me to profile a couple of specific pitchers, including Johan Santana, Stephen Strasburg and Cliff Lee. As it was, neither of these pitchers was particularly fortunate or unfortunate in the zone over the last two seasons. 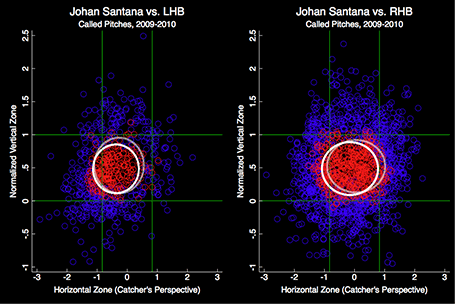 Santana does, in fact, seem to have faced the squeeze against lefties, but gained a slight edge against the average righty. Since the Mets ace has faced more righties than lefties, his overall zone advantage is ultimately positive: he gains an extra non-Pitch FX approved strike about every 100 called pitches. 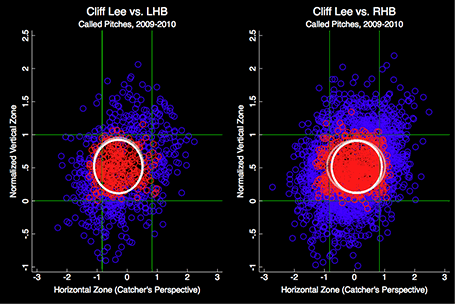 Cliff Lee's zone is also pretty close to average. In my previous research, I had felt that Lee was getting squeezed. And he is, but only a little bit, to the tune of about 2-3 extra balls for every 100 called. 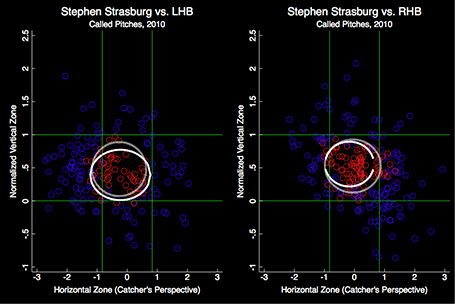 And finally, we have Nationals phenom Stephen Strasburg. The Burg reminds me why I maintain the 1 SD, 500 called pitch criteria in the first place: my zone tool doesn't draw very well with samples smaller than 250. The commenter who suggested I investigate Strasburg's zone felt he was getting squeezed. Again, he was, but only by a couple of disputed balls for every 100 called.

Of course, feel free to shoot along any requests if you do have them, regardless of my own criteria. As we move forward, I'll take a closer look at what makes for an errant strike and an errant ball, and in what situations they're most likely occur. But as for now, I hope that my American readers enjoy a Happy Thanksgiving—and that my international readers enjoy an equally happy Thursday and Friday!