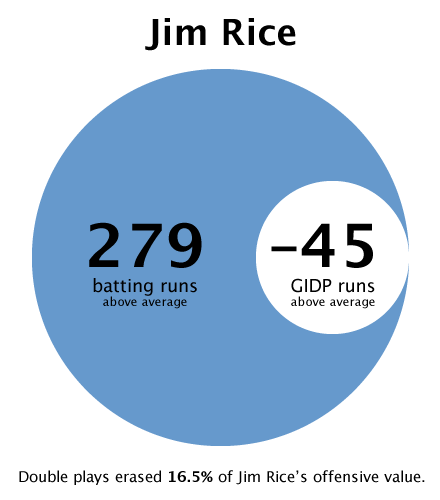 Double plays can be toxic to an offense. Not only are you getting yourself out, but you're also getting somebody else out and either ending the inning or taking a very promising no-out situation to a two-out one. Nobody in the history of baseball (according to Sean Smith's calculations) cost their team more by grounding into double plays than Hall of Famer Jim Rice. However, this major flaw in his game goes essentially undetected to the casual fan because it isn't reflected in his batting average, OPS, or other traditional metrics.

It's not that I love to pick on Jim Rice.

I mean, I'm a Red Sox fan who lives in Massachusetts. So, he's kind of a legend around these parts. But I think he's a wonderful example of a player who's perceived value is much different from his objective value.

Rice looks great at first glance—he had an MVP, hit for average and power, and did it all during a time of depressed offense. So, why does his Wins Above Replacement total (41.5) rank just 258th all time (among position players) alongside the likes of Jose Canseco, Andy Van Slyke, and Lenny Dykstra?

Rice's career counting numbers looked pretty good: a .298 average, 382 home runs, 1451 RBI, and 2452 hits. He's one of only 14 players in Major League history to reach all of those numbers. Yet he ranks at the bottom—and by a wide margin—in WAR among those players.

Why is Rice so far behind?

First of all, any time you make a list like that, your guy is bound to be at the bottom. I'm using all the numbers Rice achieved as the minimums. So, everyone on the list exceeded each of them. But there are also a couple fundamental differences between Rice and the rest of the list.

There's also an elephant in the room. While Sean Smith (and therefore Baseball-Reference) have Rice at 41.5 wins, Fangraphs has him at 56.1 WAR. Of course, I've seen differences between the two before—they use different inputs (but similar methodologies). What really strikes me is the difference in Batting Runs. Sean Smith has 279 to Fangraphs' 336.5. If anyone has an explanation for this, I'm all ears!