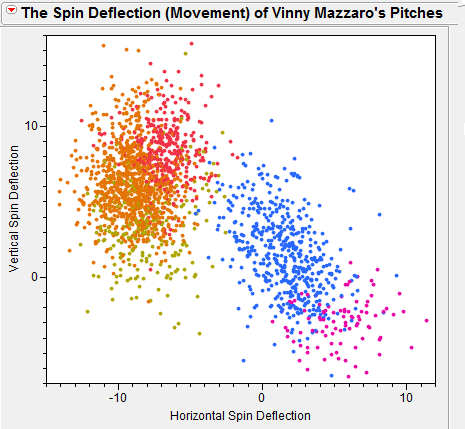 Welcome to the first normal edition of Pitchf/x thoughts.  While I will be doing articles like the ones on Hughes and Chamberlain in this spot every now and then, this column is more for talking about interesting facts picked up in the Pitchf/x data.

Today's topics are the unusual splits of a cutter, the borderline between cutters and sliders, and looking at the sinker of a recently traded pitcher...that doesn't sink.  Read on, after the jump:

The Unusual Splits of the Cutter:

The cutter is a pitch that's been getting a lot of attention lately.  The pitch is basically a fastball that either barely breaks horizontally or breaks the wrong way.  The end result is that the pitch crosses the plate diagonally to some extent away from a same-handed batter, unlike a generic fastball which winds approaches the plate more head-on.

But an odd result of this pitch is how the pitch gets ground balls against same and opposite handed batters.  Take a look at the following table:

For non-cutter pitches, pitches that are thrown to same-handed batters (in other words from a Righty pitcher to a Righty batter) are more effective at getting whiffs and swinging strikes than pitches thrown to opposite handed hitters.  This is also the case with cutters.  But for non-cutter pitches, pitches are more effective at getting ground balls against same-handed batters than opposite-handed batters.  This is NOT TRUE of cutters.

The end result is that cutters are effective against both types of batters, but they're effective in different ways.  For a prime example of this, see Pittsburgh's Evan Meek.  Meek's fastball has a good amount of cut, and extremely demonstrates this type of odd reverse split:

Talk about getting batters out in different ways!
----

What do you call a pitch that's in between a cutter and a slider and what should a pitcher do with it?
So I was looking at a Met pitcher for metsminorleagueblog.com, and I noticed that the pitcher, Robert Carson, had a pitch that was really borderline....it was right in the middle of where we'd call it a slider or a cutter.  Now it's clear that the pitch is thrown with a slider grip, and is used like a slider.  But ignoring what he calls the pitch (as we do with Pitchf/x analysis a lot of the time), how should we define the pitch?  On metsminorleagueblog.com, I called the pitch a Slutter, but well..that doesn't sound good at all.  I'm partial to "Cullider" myself (pronounced Collider), as that sounds snappy.  Thoughts?

On a less trivial matter, a question for the comments:  What do you do with such a pitch?  Scouting reports on the pitcher in question were down on the pitch as a slider and indeed, it didn't show good movement as a slider (it had good velocity for a slider however).  However, what was bad movement for a slider would have been fairly good movement for a cutter...a good amount of sink and a clear difference in horizontal movement from the fastball.  Shouldn't a coach for that player's team suggest trying to use the pitch as a cut fastball (more of an in-the-strike-zone pitch, which can throw off one looking for the fastball) than as a slider?  Why don't guys try this, no matter what the grip?  Assuming of course the pitcher can learn to control the pitch well.

When the Royals recently traded David Dejesus, they acquired Oakand pitcher Vinny Mazzaro.  Mazzaro has been described through his career as a sinkerballer, but well he had a ground ball percentages of just 39.1% in 2009 and 42.9% in 2010, which makes him almost more of a fly ball pitcher (In fact, 2009, Mazzaro gave up more fly balls than ground balls). What's going on here?

Well, first observe Mazzaro's splits: Against RHBs, his GB% is 45.3%, which is, while once again is not great, is not a terrible result for a sinkerballer.  Against Left-Handed Batters however, the rate is only 40.7%.  The reason for this is how Mazzaro's sinker works:  Against Right-Handed Batters, it gets a ground ball 54.8% of the time; against LHBs, the pitch only gets a GB 38.1% of the time.  That's particularly poor.   Now, the movement on the two-seam fastball is NOT different really for different types of batters so what explains this?

Well, the pitch is really a borderline version of what people would call a sinker...on average, the pitch has +6.21 inches of positive vertical spin deflection, which is really not a lot of sink (basically the pitch drops 2-3 inches more than a typical (4-seam) fastball.) 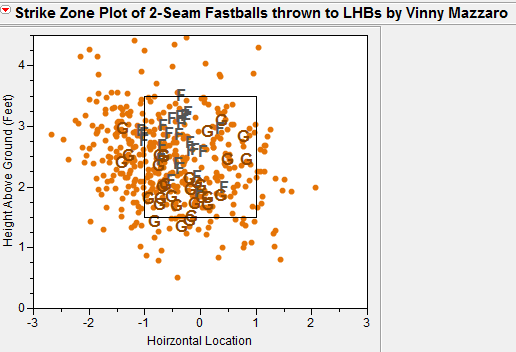 As the graph shows you, there seems to be a clear area in the lowest third or fourth of the strike zone where Mazzaro is able to get ground balls and above this area, balls put into play tend to be fly balls (or other pitch types).  This shows the potential to get ground balls would seem to be there, if Mazzaro would aim lower.  But he doesn't; in fact he locates middle-high, and thus gets poor ground ball numbers.

Interestingly, the pattern doesn't hold true for right-handed batters...the pitch gets ground balls on pitches both up and low in the zone consistently.  I have no clear explanation for why this is, but I'd guess (once again, total speculation here) that the cause of this is either: A.  The pitches movement has the pitch move more in on a right-handed batter than he might expect, resulting in the ball being hit on the bottom side of the bat (whereas moving away would put a pitch on the top half of the bat), and B. same-handed batters do not get as good a look at the ball coming out of the pitcher's hand, and thus can't adjust as well for the pitches sink as opposite handed batters do.

Anyhow, the moral of the story is this:  especially in regards to a sinker with mediocre sinking movement, if the pitch isn't DOWN, it won't be a great ground ball pitch, in particular with regards to opposite-handed batters.

While looking at Mazzaro for this article, I noticed that the MLBAM classifications labeled his curveball as a Knuckle Curveball.  Mike Fast later confirmed this via a picture.  Knuckle Curves, also known as spike curveballs, are a type of curveball that are said to have a greater break downwards than a normal curveball.   According to Mike Fast, that's simply a myth..the knuckle grip doesn't affect the vertical spin deflection really.  And you can see that with Mazzaro's curveball in the image below.

Well that about sums it up for the first edition of how this column is usually going to work.  Please leave any suggestions or thoughts on the column in the comments!