Now that Felix Hernandez has officially been named the American League's Cy Young Award Winner, I can go ahead and publish this post that I've been working on for the last few days.

It's no secret that Felix posted excellent numbers (aside from his win total) in 2010.  He was second in innings pitched behind Roy Halladay, first in ERA, 9th in FIP, and 7th in xFIP.  His contributions earned him 6.2 WAR according to Fangraphs, which is good for sixth best in the majors and third in the league, behind Cliff Lee and the underrated Justin Verlander.  Using PITCHf/x, I've taken a closer look at Felix's 2010 season.

The King went with a five-pitch arsenal this year - a two-seam fastball, a four-seam fastball, a changeup, a curveball, and a slider (in order of pitch frequency).  The graphic below shows three different things: a chart of each pitch's spin deflection, relative to a theoretical spinless pitch, from the catcher's perspective; a chart of the aggregated spin deflection for each pitch; and the velocity distribution for each pitch.  (DISCLAIMER!  Safeco Field looked to have some funky calibration issues for a lot of the season, making it difficult (more difficult than usual) to distinguish four-seamers and two-seamers.  So, definitely take the pitch movement data with a grain of salt.) 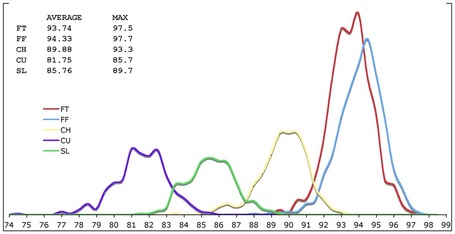 As you can see, that's a hard changeup - he's thrown a few as hard as 93 mph this year.  (By the way, it does kind of defeat the purpose of the changeup if it's only a few mph off of the fastball.  I call it a changeup because Felix uses a changeup grip, but it acts more like a typical splitter.)  Hard curveball, too.  8 inches of vertical drop is substantial for an 82 mph pitch (though the data's probably skewed slightly by the Safeco calibration errors).   Alright, so his stuff LOOKS impressive - but what kinds of results did his pitches get?

Zone rate - pitches in the strikezone divided by total pitches

RV/100 - linear weight run values per 100 pitches, a stat that John Walsh (among others) popularized in February 2008.  These values (kindly provided to me by Dan Brooks) do not perfectly reflect the 2010 run environment.

Well, it looks like we have some confirmation as to the nastiness of Hernandez's pitches, particularly his three off-speed deliveries.  Every one of his five pitches registers above average both in terms of actual run values and expected run values - that's five "plus-pitches."  The changeup is primarily used to get hitters to swing out of the zone, and curveball is swung at very infrequently (including pitches in the zone, which leads to the high watch rate).  The groundball rates, particularly for the change and curve, are filthy.  Also filthy are the whiff rates on the off-speed pitches.  It's impressive to have one pitch near a 40% whiff rate, let alone three.  Comparing them to the league average rates calculated by Harry Pavlidis earlier this year, here's what you get (with 100 as average, a la OPS+):

That gives Felix a lot of different options for a put-away pitch.  Which leads me into my next question: when in the count did Felix like to throw each pitch?  For this next chart, I will steal a graphical idea from Jeremy Greenhouse.  The columns represent pitches against all batters, and the tables are split by batter handedness.

Generally speaking, Felix is most likely to go to the curve as his offspeed pitch with one strike and the change with two strikes.  Also of note is that with two strikes, the four-seamers greatly outnumber the two-seamers.

So, hopefully this gives you a pretty good summary of how the King goes about his work.  To summarize:
1.  He's got velocity and movement on the fastball.
2.  He has three elite put-away pitches.
3.  He'll probably go to the changeup with two strikes, but it would probably work out just fine if he used the curveball or slider.

Oh, right; I almost forgot to mention that he's not even 25 yet.  Batters: beware.

The data in this post are courtesy of Joe Lefkowitz's tool.