Welcome back to the BtB Mailbag, where every week we take our best shot at your best questions. Send your questions to btbquestions@gmail.com and include your name for inclusion.

The first question this week (or set of questions, as it were) comes from Sean:

I have a couple of questions about Isolated Power as an evaluator of power.

My first question is: why is ISO calculated with ABs rather than PAs? Doesn't this give an advantage to players who walk more?

I would also like to know what ISO tells us about a player. In a post on BtB, PWHjort showed that players who a lot of home runs per fly ball do not hit more doubles and triples than players with low HR/FB rates. But ISO lumps together all extra base hits.  So, is ISO a satisfactory evaluator of power? Or, should there be one power stat for home runs and a separate power stat for doubles and triples power?

Finally, how does ISO correlate from year to year?

First up, if we're measuring power then why would we want to include walks? I'm not sure how excluding them by using AB instead of PA gives high walk players an advantage; if you have a player with a line of .300/.400/.500  and another at .300/.350/.500, then they both have ISOs of .200 and the only difference between the two is walks (in a simplified example). Does that mean that the .300/.400/.500 hitter is better? Sure, he's got a 50 point edge in OBP. Does he have more power though? I see no reason to say that he does. Assuming the same number of at bats for the two and the same strike-out rates, they'd have the same number of total bases per ball in play (as well as total bases per hit) - which seems like an intuitive enough measure of power apart from ISO. Perhaps I'm missing something or misunderstanding the question though.

For part two; ISO only measures what it measures. It isn't the final word on power, but it does give you a good idea. There's nothing stopping you from looking at ISO for the general picture and then taking the extra step to check out hit distribution (to see home runs versus doubles and triples*). Another way to measure power that some people prefer is POW (extra-bases per hit - it's what Jack Moore uses for his Four Factors at FanGraphs).

* Baseball Prospectus actually uses a slightly altered ISO, weighing doubles and triples equally based on that idea that the difference there has more to do with speed than power.

Which metric one prefers - with POW = (3 * HR + 2 * T + D) / H and ISO = (3 * HR + 2 * T + D) / AB - depends on exactly what one considers "power" to be. Is it a batter who's going to get the most out of his hits or out of his chances to get hits? My intuition is to use the former, but the majority of the time (especially for the less powerful hitters in the game*) it probably won't really matter. Similarly, if one considers "power" to be very closely linked to home runs then looking at home runs (HR/AB or HR/FB or whatnot) instead of ISO might be better. First figure out what you want, and then use the appropriate metric(s)**. 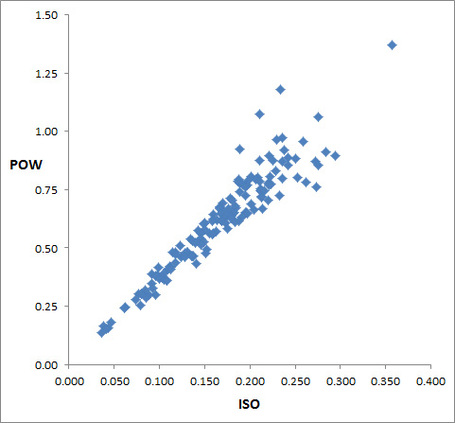 (Jose Bautista had a crazy season)

** Patriot looked into ISO versus Power Factor (total bases per hit instead of extra-bases as in POW) previously, saying most of what I did here, (and better).

On the last part, Eric Seidman did at piece at FanGraphs (referencing a study done by Pizza Cutter/Russell Carlton) looking at when different stats become reliable (number of PA needed in the sample for split-half reliability to come up with r = 0.7). For ISO, the result was at the 550 PA threshold; higher than for the majority of stats (OBP and SLG, among others, were at 500 PA) but lower than for batting average and BABIP. And to answer the question more literally, from 2009 to 2010 for qualified batters in both years, the R² for ISO was about 0.5.

Keane asks: Which WAR system do you like more?  FanGraphs WAR or Baseball Reference?

I honestly use fWAR more since FanGraphs is my go-to spot for baseball stats and it's right there. There's a nice thread at The Book discussing the differences between fWAR and rWAR (r = Rally, who provides B-R with their figures), but it never hurts to at least look at both.

Mike asks: Can I trade my softball team's back-up pitcher for Hanley Ramirez?

Can your softball team afford that contract though? If so, I'd say you've got a shot. This off-season the Marlins have traded away:

Looks like Florida really really wants to improve on a pen that was very middle-of-the-road (at best) in 2010. If they can take leads into the later innings they should be in decent shape, though I'm not sure giving up two up-the-middle talents (one established and one with some upside potential) is really the best way to have gone about that - especially given how volatile relief pitcher performance can be. We'll see what happens, but I wouldn't be particularly thrilled if I was a Marlins' fan.