Benefit of the Doubt: Starters Who Get the Wide Zone

Share All sharing options for: Benefit of the Doubt: Starters Who Get the Wide Zone

Let's start with the most fortunate pitcher over the last two years (minimum 500 pitches), Livan Hernandez. 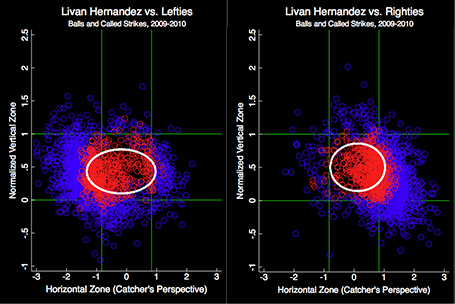 As you can see, Livan makes his living by pounding the outside corner. And he gets it—especially against lefties. Compare Livan's personal zone vs. the typical zone for right-handed pitchers. 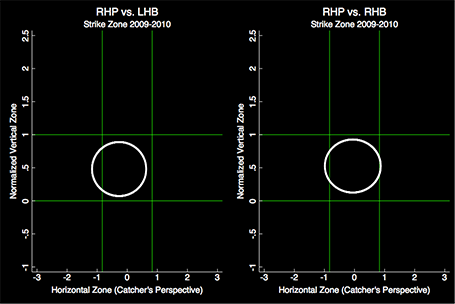 Same as with Mo and Wilson, it's not surprising that Livan gets the corner, but it is surprising that he gets so much of it. Why is Livan so successful here? And for that matter, why is Derek Lowe almost as successful? 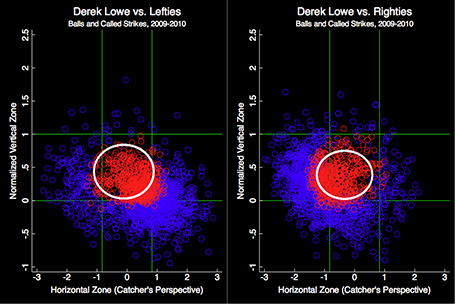 Derek Lowe has a very similar zone to Livan Hernandez: he gets the outside corner, especially against lefties. Aside from the fact that he keeps his pitches lower, he also gets the inside corner on right-handed batters. In sum, they're both veteran, right-handed starters who have been fortunate with the zone, as you can see below.

But why? Before I answer that question, let's look at some more pretty pictures. Spolier alert: it's not just right-handers that get the benefit of the doubt (despite what a quick glance at the chart above might indicate). Case in point, lovable lefty Jamie Moyer gets similar consideration from the blues. 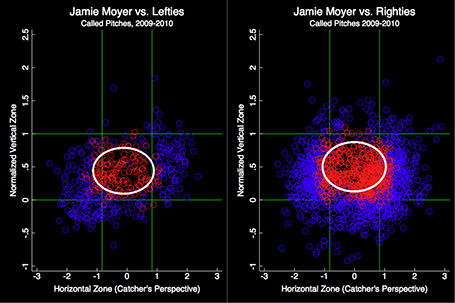 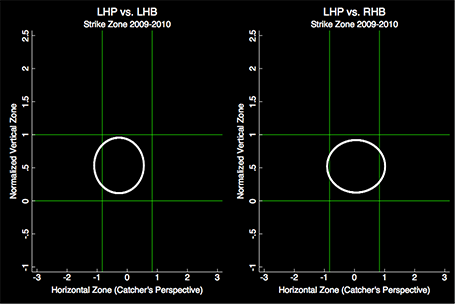 And by far the most interesting chart comes from the most fortunate lefty of 2009-2010, J.P. Howell, who uncharacteristically grabs some extra strikes high in the zone on the left-handed batter's outside corner. 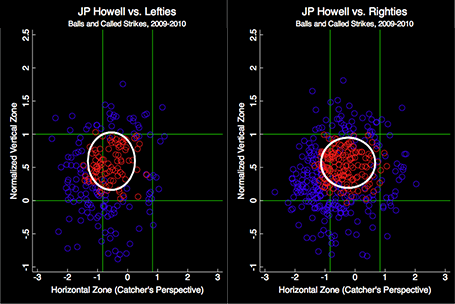 So what's the common thread? This question sparked a discussion over at Inside the Book, where Tom Tango was gracious enough to link to last week's post. I've since crunched the numbers, and the results tell me it's not about pitchers having a specific "skill" in grabbing extra strikes outside the zone relative to less fortunate hurlers: the variance across pitchers is essentially random.*
*Last week, I suggested some characteristics that linked all the fortunate pitchers together. Those characteristics should be ignored, as the most recent models yield different findings in many cases.
The same holds true for hitters and umpires at the individual level. While in any given year a pitcher, hitter, or umpire may have a wider or narrower zone—and while some may duplicate these numbers from year to year—the variance across all three sets of actors is random. In short, the effect occurs not at the individual level but at the pitch level of analysis and the context in which the pitch is thrown.

The table above lists the variables that I have found consistent (and statistically inconsistent) with a favorable call on a specific pitch. Controlling for location, fastballs with strong horizontal or (especially) vertical movement are more likely to favor the pitcher. Contextually, an umpire is most likely to call a strike that the Pitch FX system disagrees with when the pitcher is pitching at home, in the playoffs, facing a left-handed batter, when the there are more outs, more balls, and fewer strikes on the batter, and/or when there are runners on first and/or second, ceteris paribus.

The inning during which the pitch was thrown, the handedness of the pitcher, and the velocity of the pitch were irrelevant when controlling for the aforementioned factors (if you'd like to dig deeper into the findings, and don't mind sifting through raw output from statistical analysis software, feel free to check out the tech notes on my blog here).

When we look back at the pitchers of record with this new information, the results start to make sense. Livan, Moyer and Lowe all throw fastballs with substantial movement, not the least of which is because they don't throw very hard in the first place. As contact pitchers, they also tend to pitch with runners on more than others.

As for our subjects from last week, Mo and Wilson both rely heavily on fastballs with movement.

The reason for the disproportionate RHP representation on the list? Well, first of all, there are more righties than lefties in baseball. But also, RHPs are far more likely to face lefties than LHPs are, and umpires give right-handed batters more leeway.

That, in a nutshell, is what it means to get the benefit of the doubt in the majors. Be sure to tune in after Thanksgiving, as I detail the starters and relievers who weren't as fortunate as their colleagues according to Pitch FX.