-ed. note: I loved this fanpost so much I gave it a new title and some imagery to complement the great work by DBITL. 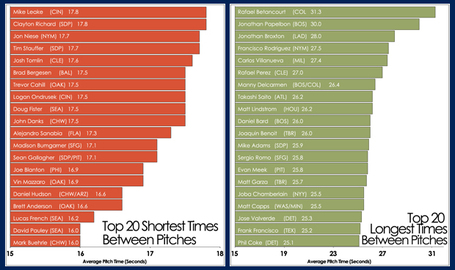 I've always been fascinated by how long a pitcher takes between delivering pitches. It can now be quantified, thanks to the PITCHf/x time stamp. Mike Fast wrote three articles about this topic in 2008, but I'm pretty sure there hasn't been a whole lot since. So, I thought it would be cool to start tracking pitch times in my PITCHf/x data.

At this time, I'm tracking: pitches that are thrown with nobody on base, because I can't track pick-off throws; pitches other than the first of the plate appearance, so that I don't the time between batters; and sets of pitches that have more than zero seconds and less than one minute of difference - the former indicates a PITCHf/x glitch, and the latter is probably related to some kind of game delay.

For pitchers that threw 500 or more qualified pitches (pitches that meet the requirements for tracking pitch times) in 2010, here are the 20 major league leaders and major league trailers for time between pitches. Measurements are in seconds: 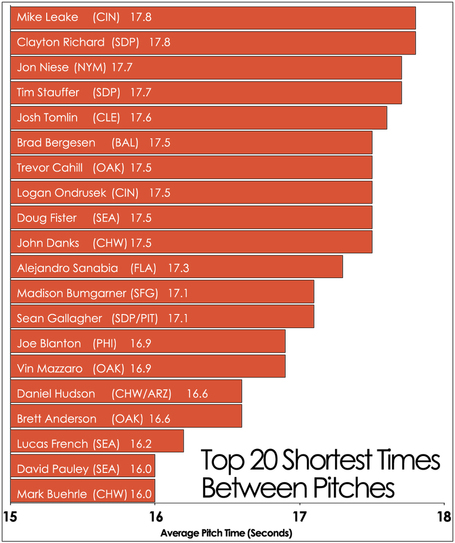 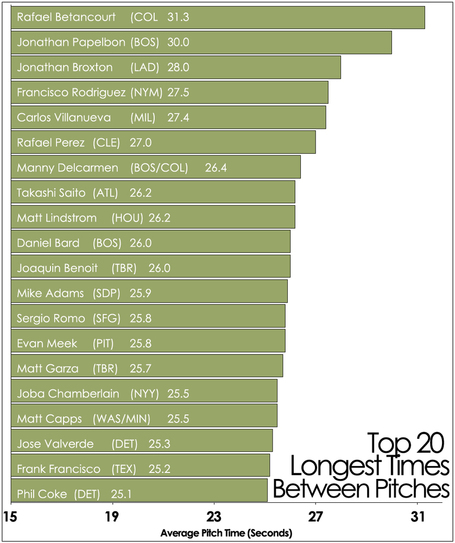 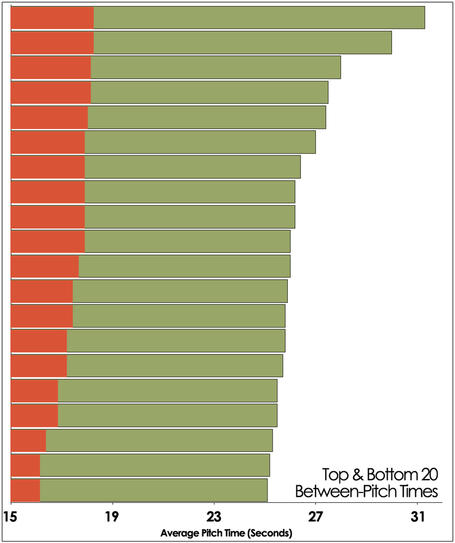 I noticed that in both directions, there were plenty of representatives from the same team - three A's, White Sox, and Mariners on the "quick" side; three Red Sox, two Rays, and two Rockies on the "slow" side; also, there were no A's, White Sox, or Mariners among the slow workers and no Red Sox, Rays, or Rockies among the quick workers. Here's how the list looks, aggregated by team.

The data here are courtesy of Joe Lefkowitz's tool. For further reading, definitely check out Mike Fast's 2008 articles - two on the Hardball Times and one on his blog. I've done a few posts on my blog concerning pitch times. Any comments, questions, or suggestions for improving the methodology are always appreciated.