Benefit of the Doubt: Relievers Who Get the Wide Zone

Share All sharing options for: Benefit of the Doubt: Relievers Who Get the Wide Zone

Okay, to be honest, it wasn't my original plan to write this post. My first idea was for a generic PitchFX analysis similar to my examinations of Barry Zito and Stephen Strasburg from earlier this year. My goal was to find pitch-level data that would explain the (nearly) ageless Mariano Rivera's "decline" from 2009 to 2010. However, when I plotted his strike zone data, I noticed something that I hadn't noticed before: home plate umpires are really—and I mean really—offering Mo a wide strike zone. 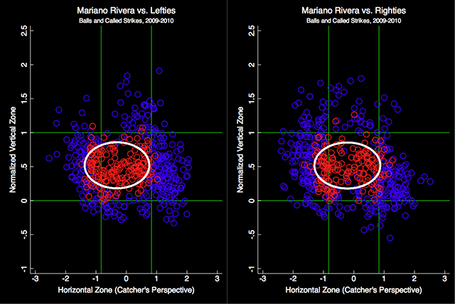 The images above plot Mariano Rivera's pitches (balls in blue, called strikes in red) against the rulebook-defined strike zone (in green) during the 2009 and 2010 seasons. The strike zone that umpires call specifically for Mariano Rivera appears in white. Now, it's not news that the called zone differs significantly from the rulebook zone, or that righties get the outside corner against lefties. What's striking is how different Mo's strike zone is from the typical zone. 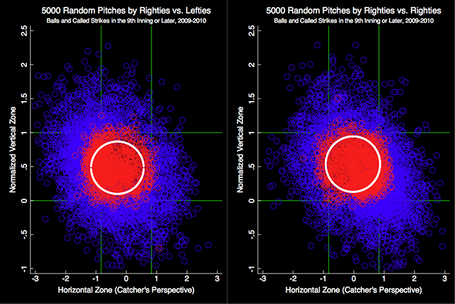 The chart above represents a random sample of 5000 pitches drawn from a larger population of called pitches thrown by right-handed pitchers in the 9th inning or later from 2009-2010. As you can see, the ellipses defining the umpires' zones are far more regular, and a bit more faithful to the rulebook zone.

Exactly how helpful has Mo's extra-wide zone been? To answer this, I counted all the balls and called strikes that PitchFX didn't agree with, divided those numbers by the total number of called pitches, and subtracted the ratio of supposedly errant balls from the ratio of supposedly errant strikes. According to these data, Rivera earned about 7.5 additional non-PitchFX-approved strikes for every 100 called (equal to every ~200 he threw).

That's not a trivial advantage, nor is it a common one: Rivera's net called pitch advantage is third best among all pitchers who threw at least 500 pitches since 2009, second best among relievers, and 1.61 standard deviations above the mean. Who did even better according to PitchFX? None other than The Bearded One: Brian Wilson, closer for the 2010 World Series Champs. 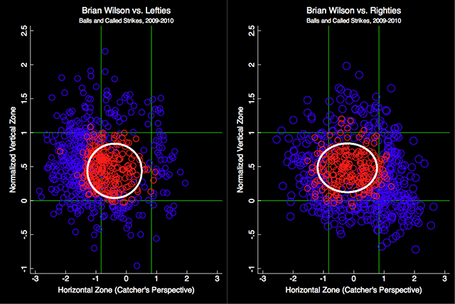 Note that against lefties, Wilson's zone is actually rather close to the typical late-inning zone for right-handed pitchers. Against righties, however, it's a different story. Much like Rivera, Wilson gets both the outside corner against lefties and the inside corner against righties. That advantage earns him 8.9 additional strikes per 100 pitches called, a full 1.91 standard deviations above the mean.

The Ageless Wonder and the Bearded Wonder aren't the only pitchers to benefit from a big zone over the last two years, nor is this advantage solely confined to right-handed power closers with pinpoint control. Below is a list of all the pitchers (min. 500 called pitches thrown) whose zone advantage was at least one standard deviation above the mean during 2009-2010:

A motley crew they are, indeed. What links them all together? According to statistical analysis I'll be presenting later in this series, umpires expand their zone when the pitcher keeps his velocity down, pitches late in the ballgame, keeps runners off base, delivers with a high positive vertical spin deflection,* and happens to be a righty facing a lefty.

*In English, this means that the spin applied to the pitch causes it to reach the plate higher in the zone than we would expect if we ignored the interaction between aerodynamic drag and the rotation of the ball.

Very few of the pitchers listed above share all of these characteristics. For instance, Mo and Wilson tend to have positive vertical pitch deflection, face more lefties than average, get through their outs quickly and pitch late in the ballgame. Wilson also tends to pitch with more runners on base than average, but Mo does not. Neither of them are known for keeping their velocity down.

But take a look at the starters that top the list: Derek Lowe and Livan Hernandez.* These two journeymen are both known for their ability to get by with low velocity pitches. Same goes for Trevor Hoffman and J.P. Howell, the most fortunate lefty on the list.

*Speaking of Livan Hernandez, I remember quite well the first pitch he threw in Washington. It was memorable because it was the first pitch at home in the history of the Nationals. It was so far off the plate it had a chance to hit President Bush in the stands. It was called a strike. It all makes sense now.

We'll talk more about starters next week as this series continues, but I'll conclude this post by bringing it back to Mo. It's obvious that the 2010 model Sandman was a bit off compared to the 2009 edition, although still extremely effective. Well, perhaps his decline in quality hurt his strike zone or vice versa: between 2009 and 2010, his zone advantage dropped from 8.9 strikes to 4.7 strikes per 100 pitches called. Brian Wilson's, on the other hand, grew from 8.5 to 9.4.

Now that's the kind of advantage I'd like to have in the World Series.

Note: Can't believe that I was remiss in noting this earlier. This data comes from Darrell Zimmerman's SQL-based PitchFX database.