A Timeline of the Best Players Ever

Share All sharing options for: A Timeline of the Best Players Ever

Let's take a break for a moment and step back from today's current players trying to reach immortality (in the World Series, of course) and focus our attention on those who already have. Today, I want to talk about the absolute greatest players in the history of the game—specifically, the 20 best position players. I was curious what the very greatest players in history would look like on a timeline. How much overlap was there in their careers? Were there certain eras that had more players? Any major droughts?

The criteria I'm using is Wins Above MVP Level, of course. As a reminder, Wins Above MVP (WAM) Level adds up a player's single-season WAR totals over 6.0 WAR. The goal is to only measure dominant MVP-worthy performances. The guys who constantly did that, for today's graphic, are the best players ever.

And here is the timeline: 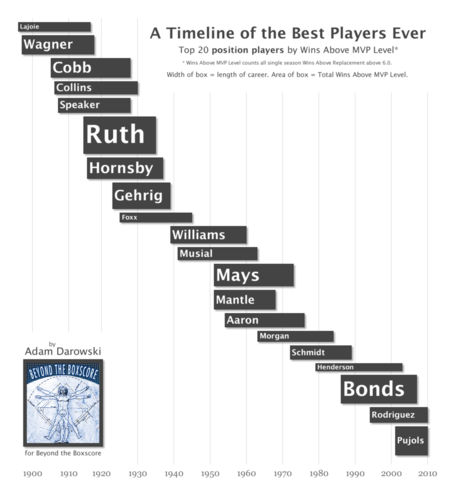 Of course, you can click to make it larger.

The width of the boxes obviously denotes the start and end times of each player's career. The height of the box is calculated from the length of career (i.e., width of box) and total WAM the player accumulated in his career. So, the area (length * width) of the box represents the total WAM. In the full-size image, the font size on each player is actually exactly the same as his total WAM. So, as you'd expect, the biggest boxes and text belong to Ruth and Bonds with Mays, Hornsby, Cobb, and Gehrig behind them.

As for my original goal for this post—seeing how the very best players in history overlapped on the timeline—I'm pleasantly surprised. Basically, if you pushed back the start dates for Willie Mays and Ted Williams, you would pretty much have a perfect staircase. From 1925 to 1928, we had the most players active at once—seven of the twenty players on the graph (Cobb, Collins, Speaker, Ruth, Hornsby, Gehrig, and Foxx—four of the top six all time). From 1954 to 1960, we had an impressive group of five—Williams, Musial, Mays, Mantle, and Aaron (four of the top ten all time). Currently, we have two active (Rodriguez and Pujols), but as recently as 2003, we had four active (Henderson, Bonds, Rodriguez, and Pujols).

But what about World War II? Great question. Those players were still "active", but there were years that they didn't play. Neither Musial nor Williams played in 1945, but Jimmie Foxx did (Foxx missed 1943 and 1944 not for military service, but because he temporarily retired). Williams and Foxx both missed 1943, but Musial played. Williams also missed 1944. So, all three missed time, but each year at least one was active.

Here's the raw list of the players on the graph (with WAM totals in parentheses):