I had to hang onto this post a little before publishing—I didn't want to get too ahead of myself when pondering what Cliff Lee could do in the WORLD SERIES(!!!).

Cliff Lee has already fanned 34 batters while walking just one this postseason. That already puts him among the leaders in single-season postseason strikeouts—tied for tenth all time, in fact. I was curious how those pitchers ahead of him fared in the base on balls column. Instead of focusing on those with (nearly) the same strikeout total as Lee, I picked the top five all time in single-season postseason whiffs.

Here they are, with their walks and strikeouts shown, listed with Lee: 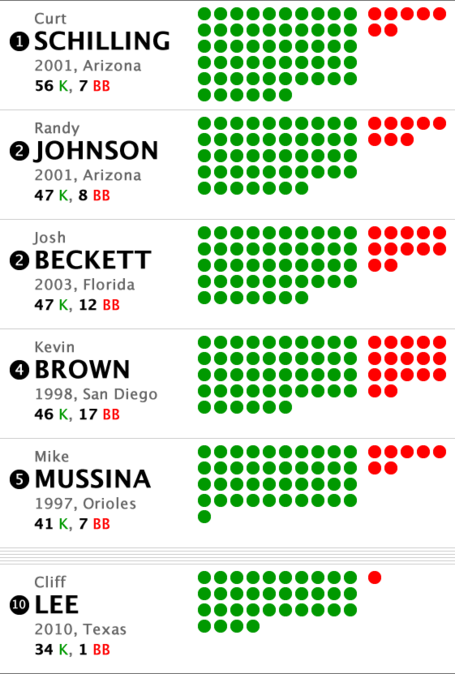 Clearly, Lee owns the walk column. Curt Schilling not only holds the top spot for strikeouts, but he also is tied for the fewest walks among the top five. Pretty damn impressive. How far off is Lee from the top spot? Assuming he starts twice in the World Series, he'd need a pair of 11-strikeout games. So far in the postseason, he has had 13, 11, and 10 Ks in his three starts. So, he's on pace to do it—but it may be an unsustainable pace.

This is all just another way of saying we're seeing something remarkable here.