About seventy years ago two players from two heated rivals dominated the 1941 season. Joe DiMaggio's 56 game hitting streak and Ted William's 0.406 batting average were the lead stories that summer. Both feats have not been equaled since then. While other players had good seasons in 1941, they could not even come close to the seasons these two achieved.

First, let's look back at the AL MVP voting from 1941 (pitchers placed much higher in the MVP voting because there was no Cy Young award yet):

As it can be seen, the big two that year ran away with the voting. These six vote getters were the top 4 hitters and top 2 pitchers in 1941according to Rally's historical WAR data set. Here is a comparison of the rate stats and WAR totals for the six:

DiMaggio and Williams were definitely the top two players in the AL that season. Here is a comparison of the individual WAR components for Williams and DiMaggio (thanks to Justin Bopp for the graphic). 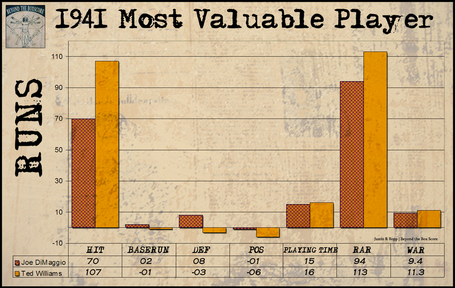 DiMaggio's defense was not even close enough to make up for the almost 40 extra runs Williams' offense created. Williams' OBP and SLG were each about 100 points higher than DiMaggio's. Just looking at the hitting component of WAR, Williams had the 7th greatest offensive season ever. A couple guys named Ruth and Bonds were the only ones to have better offensive seasons.

The problem Williams faced was that hitting 0.400 was seen then as an achievable feat with Bill Terry in 1930 (thanks to mooksta2 for the correction). Just two season for these two clashed, DiMaggio led the league with a 0.381 average. Since 1941, no player qualified for the batting title has hit 0.400. Tony Gwynn came the closest in 1994 by hitting 0.394.

A 56 game hitting streak at the time seemed out of this world and is still unbelievable. The record at the time was 45 games by Willie Keeler. The closest anyone has come to breaking the record was when Pete Rose got to 44 games in 1978.

With both players having a great season, voters might have been persuaded by the 17 games that the Yankees won the division by over the Red Sox. 1998 was a great example of winning team bias in MVP voting. Sammy Sosa got the nod over Mark McGwire for the MVP even though McGwire hit more home runs than Sosa when both broke Roger Maris's home run record. Sosa ran away with the MVP vote, getting 30 of the 32 first place votes, by leading the Cubs into the playoffs (and of course losing once there).

I was wondering how voters today would vote if two players would have similar type seasons. I think they might be more inclined to vote for person hitting 0.400, vice the long hitting streak because there is some better understanding of advanced metrics. Also it has been a while since either milestone has happened so both will catch the public's attention. I hope one day to see just one of these feats, but for both to happen in the same year is extraordinary.