Share All sharing options for: Free Agent $/Win Based on Playoff Probability Added

There has been a lot of discussion this off season dealing with spending relative to where a team is on the win curve.  My goal here is simply to do some back of the envelope math to set some ranges on the dollar values that teams should pay for a win based on where they are on the win curve.

I went through and calculated the PPA for each one win increase.  I turned each value into a percentage of the max observed PPA, and then took the maximum of that percentage and the assumed percentage floor.  After getting the relative percentages I reverse engineered the final cost per win so that the weighted average* would be our standard $4.4M/win. 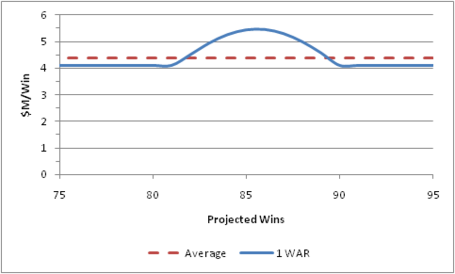 The blue line is the $M/Win for a 1 WAR increase based on the number of projected wins.  Clearly the most important wins to gain from a PPA perspective are those in the 83-88 range.  Expanding that chart to look at other floor values yields 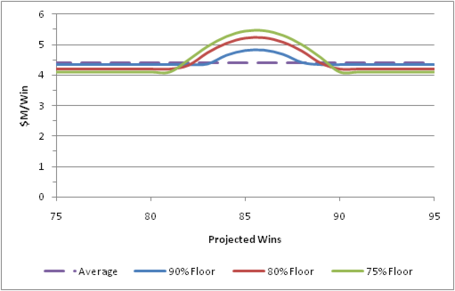 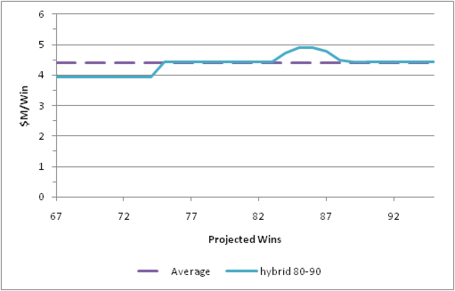 Note:  All of the numbers were calculated using a wins scale of 67-95, everything left of 75 wins was omitted as it was identical to the 75 number.  Clearly here it matters, so I showed it.  For comparison/refernce purposes, here is the 80-90 hybrid with the 90% floor on the original scale 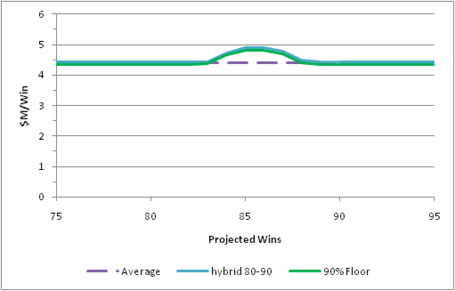 What does this barrage of graphs tell/show us?

Additional aside.  The chart / numbers change based on the assumed production level of the contract.  Basically a 4 win player would shift the bump in the curve to the left ~4 wins [update, I should look at my own chart before making statements, the curve peak is actually shifted left only 2 wins to 84]...  See here for related charts.

I think these curves are another tool to look at some of the contracts given out this off-season.  I think their primary use would be in examining the contracts that are likely marginal (i.e. likely to be around break even) or were marginal (if doing retrospective analysis).

I think the next step would be to see if there is any historical evidence to support any of this.  Have teams in the middle of the projected win curve spent more than teams on the edges?